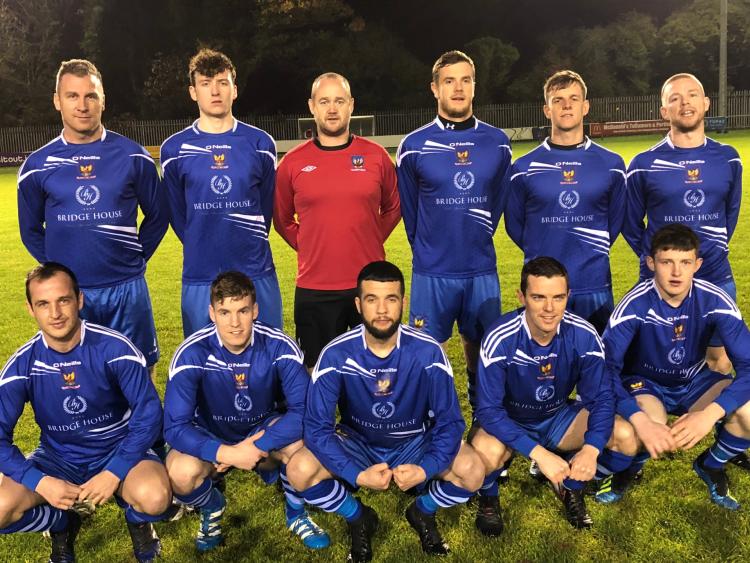 A stunning injury-time volley from Shane O’Connell was not enough to prevent Tullamore exiting the Metropolitan Cup in Leah Victoria Park last Friday as Derek Doyle’s long-range strike in extra time ensured Glenville’s safe passage into the next round.

They began brightly with Enda Carroll picking out Brian Francis but his effort was charged down by Stephen Grimes. With 10 minutes gone Glenville nearly opened the scoring when Robert Murtagh played in Keith Weakes, but Alan O’Connell brought off a superb point-blank save to deny him.

A quick free kick from Kevin Williamson sent Anto Kavanagh free in the inside left channel but he fired over and then a dangerous Patrick Robilliard cross was well taken by Carl O’Reilly in the visitor's goal. Tullamore were forced to ring the
changes on 20 minutes when Robbie Shine limped off with Andy Quinn coming on and Brian Francis taking over the central defensive role.

They went back on the attack with Shane Dowling latching on to Shane O’Connell’s through ball but he was stopped in his
tracks by a fine tackle from Conor Moore. As Glenville began to gain the upper hand Weakes got on the end of a lovely cross from Josh Clifford but miss-hit his volley and then good approach play by Derek Doyle and Robert Murtagh created another opportunity for Weakes but he fired over.

He was proving a real thorn in Tullamore’s side and he again went close when he broke through the middle but Brian Francis got across to clear. The home side threatened when Brian Norris played a great ball out of defence to Patrick Robilliard on the left but Stephen Grimes was alive to the danger and they again went close when Robilliard and Anto Kavanagh combined to pick out John Drummond on the right, but his effort flew inches outside the far post as the referee brought the first half to a conclusion.

Within minutes of the restart Tullamore nearly broke the deadlock when Kevin Williamson’s free-kick broke back to John Drummond, but Carl O’Reilly brought off a fine save to keep his side in the game. Drummond did get the ball in the net when he latched on to a through ball from Enda Carroll but he was called back for off-side.

As the game continued to ebb and flow Ciaran McDonnell fired narrowly wide while, at the other end, Shane Dowling’s close-range header was brilliantly tipped over the bar by the Glenville keeper. With 75 minutes on the clock the visitors jumped into the lead when Josh Clifford was taken down in the area with Derek Doyle firing the resultant spot-kick into the roof of
the net.

As Tullamore hit back good play between Patrick Robilliard and Enda Carroll created an opening for John Drummond, but Carl O’Reilly brought off a fine save down low to his right. The Dublin side went close when Josh Clifford raced clear through the
middle but Brian Norris did well to get back to knock the ball behind.

With Shane Martin coming on Tullamore redoubled their efforts and, as the game moved into injury time, they struck for the equaliser. Good play between Shane Dowling and Andy Quinn on the right saw the ball delivered across the face of the goal for Shane O’Connell to drive the sweetest of left foot volleys into the bottom right-hand corner of the net to send the game into extra time.

On the resumption, Tullamore almost took the lead when Shane Dowling played the ball through to John Drummond but his effort crashed off the top of the crossbar. They again went close when Shane Martin’s deep cross was headed back across goal by Anto Kavanagh but Drummond just failed to get a clean contact on the ball.

Glenville should have scored when Rory Kelly got on the end of Ciaran McDonnell’s right-wing cross but he headed wide with the goal gaping. A great surging run through the middle by Brian Francis was cut out by Graham Fitzpatrick and then Brian Norris and Shane Dowling combined to play in John Drummond, but his effort was charged down by Tadhg Parker.

The visitors regained the lead when Derek Doyle’s 35-yard drive deceived Alan O’Connell in the home goal and found its way into the top left-hand corner of the net. Things got worse for Tullamore when Jack Goodings was red-carded for taking down Rory Kelly as he raced clear on goal but they refused to lie down and again went close when Brian Francis played
a lovely ball through to John Drummond, but he was denied by a great last-ditch tackle from Stephen Grimes.

They had a strong shout for a penalty in the dying seconds when Francis appeared to be dragged down in the area as he latched onto a through ball from Drummond but, despite their appeals, the referee waved play on.

Given that Tullamore were without a number of first-team regulars there were a lot of positives to be taken from this performance, particularly in relation to the players who were brought in. With injuries and suspensions starting to take hold manager Tony O’Sullivan will need to dig deep, as indeed will his squad, if they are to sustain their title challenge.

They have a tough assignment this Friday when they travel to Maynooth to take on the league leaders. In what was a very enjoyable cup tie there were excellent contributions from Brian Francis, Anto Kavanagh and Shane Dowling, but the man of the
match award went to Tullamore’s outstanding central defender, Brian Norris.