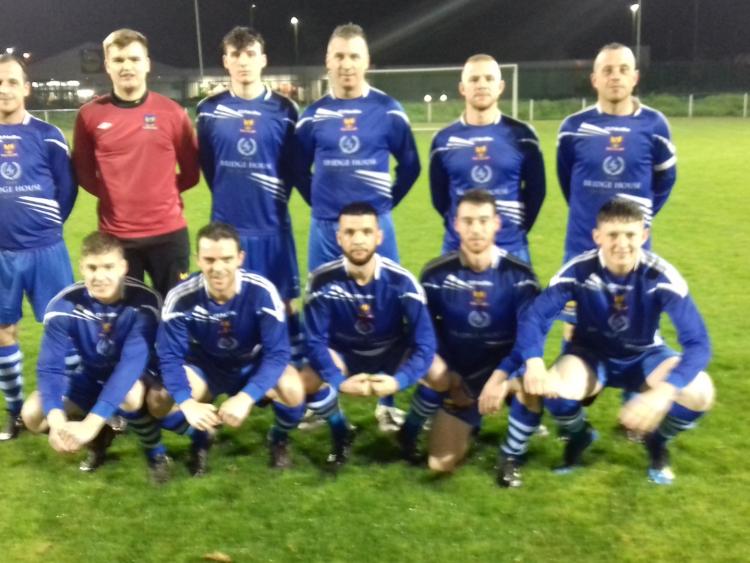 Tullamore’s five-match winning run came to an abrupt halt in Balbriggan as they were left to ponder a series of missed opportunities and two hotly disputed goals in a thrilling encounter with Glebe North.

They began brightly with Anto Kavanagh breaking clear on the right but Michael Skezypezak was quickly down to save. The home side nearly jumped into the lead on 5 minutes when Sean Lynch played a great cross-field ball to Adam Foley
but Paddy Dunican pulled off a superb point-blank save to deny him.

Lovely play between Shane O'Connell and Enda Carroll created space for John Drummond but Stephen Larkin got across to avert the danger and Drummond again threatened when he got on the end of Kavanagh’s pass but Keith Murray managed to hook the ball clear.

As Tullamore moved up through the gears Kevin Williamson had his effort deflected wide and then Shane O’Connell played a great ball through to John Drummond but he was denied by a fine relieving tackle from Stephen Larkin. With 20 minutes gone Glebe broke the deadlock when Rory O’Connor’s close-range effort was blocked by Brian Francis but, to Tullamore’s dismay, the referee adjudged that the ball had crossed the line.

The visitors twice went close when a flowing move involving Stephen Francis, Robbie Shine and Anto Kavanagh ended with John Drummond firing over and then a lovely backheel from Macdarragh O’Neill found Drummond in the area but his effort flew outside the right post.

With 43 minutes on the clock, the home side struck again when Sean Lynch got on the end of a long ball from Noel Barrett and blasted it into the bottom left corner. Tullamore hit back with Anto Kavanagh picking out Shane O’Connell on the left but his effort flew across the face of the goal but, as the first half drifted into injury time, they reduced the arrears.

Kevin Williamson floated a lovely free-kick into the area and Macdarragh O’Neill ghosted in behind the defence to head home and leave the score at 2-1 in Glebe’s favour at the interval.

On the resumption, Glebe went back on the attack with Adam Foley firing in a dangerous cross that was well taken by Paddy Dunican under pressure. Tullamore went close when Kevin Williamson found John Drummond but his cross just missed out Macdarragh O’Neill but, with 55 minutes gone, they again fell foul of the match officials.

Williamson tackled Foley in the area with the referee signalling a corner but after consulting with his linesman he pointed to the spot with Rory O’Connor firing the penalty into the bottom right corner.

With the visitors still reeling Foley played in Sean Lynch but he was denied by a fine save from Paddy Dunican. They dusted themselves down as O’Neill got on the end of a lovely ball from Robbie Shine but his effort was taken off the line by Stephen Larkin but on 65 minutes they again reduced the arrears.

Kevin Williamson picked out Anto Kavanagh on the left and when his effort was beaten out by the keeper Macdarragh O’Neill was on hand to drive the rebound into the back of the net. Glebe should have restored their two-goal advantage when Sean Lynch crossed for Rory O’Connor but he miss-kicked in front of an open goal and the chance was lost.

Tullamore nearly equalised when lovely play by O’Neill on the right saw him play the ball inside to Enda Carroll but Michael Skezypezak brilliantly turned his effort around the post. As the game continued to ebb and flow Adam Foley burst through the middle but Paddy Dunican brought off a great save to keep his side in the game while, at the other end, Brian Francis had his shot deflected wide by Stephen Larkin.

With 80 minutes gone the home side put the game beyond Tullamore’s reach with a wonderful break-out goal when Foley picked the ball up in his own area and raced the length of the pitch before firing it into the bottom left-hand corner of the net.

This was a very entertaining game packed full of goalmouth incidents, but crucially, it was the home side that made the most of their opportunities. Tullamore have slipped back to fifth place in the table but with games in hand over all the top teams, they are still well in the hunt for promotion.

They are at home against Dublin side Glenville FC this Friday in the Metropolitan Cup when they will be hoping to get back to winning ways. In what was a good team performance the man of the match award was shared between Paddy Dunican and Macdarragh O’Neill.

Tullamore are at home to Glenville FC in the Metropolitan Cup this Friday, November 9, kick-off 8.00 pm in Leah Victoria Park.