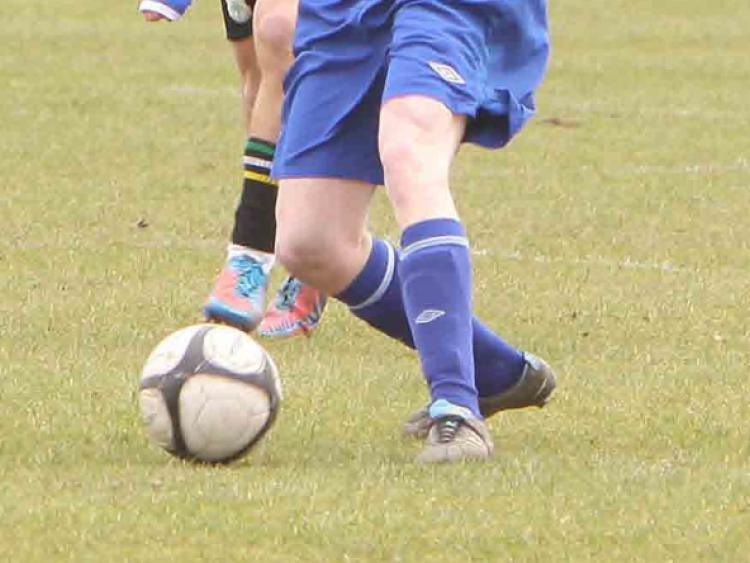 With Halloween fast approaching, Tullamore staged their own version in Leah Victoria Park on Monday when they came back from the dead to snatch all three points in injury time.

As the clock passed the 90-minute mark and Glenville were seemingly cruising to victory, Tullamore struck twice to leave the visitors shaking their heads in disbelief as the home side celebrated an extraordinary comeback.

Tullamore were first to threaten when, following a corner, the ball broke to Robbie Shine in the area but his effort cleared the crossbar and they again went close on 10 minutes when John Drummond played a great ball through to Anto Kavanagh and his cut back was fired over by Brian Francis.

With quarter of an hour gone Paddy Dunican twice came to his sides rescue when he saved at the feet of Keith Weekes and then produced a superb point-blank save to deny Ken Hughes as he broke into the area.

As Tullamore hit back Anto Kavanagh had his shot deflected wide and from the corner Robbie Shine headed over and then good play by Macdarragh O’Neill comeback the Glenville rear guard, but his low cross was hacked clear by Sean McGrane.

As the game continued to ebb and flow Enda Carroll swept the ball out to Anto Kavanagh on the left and his cross just missed out Brian Francis while, at the other end, McGrane sent a 35-yard rocket inches outside the right post.

Kavanagh and Carroll combined to pick out Kevin Williamson who crossed for John Drummond, but his header was well held by Gregg Murray down to his right. Tullamore nearly broke the deadlock on 37 minutes when Enda Carroll sent Macdarragh O’Neill clear in the inside right channel but he fired narrowly past the far post and he again went close when he got on the end of John Drummond’s pass, but his effort was charged down by Sean Whelan. With minutes remaining in the first half Brian Norris
picked out Anto Kavanagh but Murray saved at his right post as the interval arrived with the scores tied at nil all.

Within 3 minutes of the restart, Glenville jumped into the lead. Shane O’Connell did well to get back to knock the ball behind as Ken Hughes broke into the area but, from the resultant corner, Josh Clifford floated the ball directly into the net.

With Tullamore still reeling Keith Weekes fired past the post and he again went close when he raced clear on the right, but he was denied by a fine relieving tackle from Kevin Williamson. The home side nearly levelled when John Drummond played a lovely ball through to the overlapping Shane O’Connell but Gregg Murray beat his effort out at the near post.

O’Connell then turned provider as he played a great ball through to Brian Francis but Tadhg Parker got across to knock the ball behind and from the corner Brian Norris flicked the ball narrowly wide. With 35 minutes gone Tullamore again had Paddy Dunican to thank as he brought off two wonderful saves to deny Robert Murtagh and Keith Weekes in quick succession.

The visitors again went perilously close when Weekes raced clear through the middle and rounded the keeper, but he failed to hit the target from an acute angle. As Tullamore fought back Kevin Williamson’s free kick broke back to Anto Kavanagh but he fired over while, at the other end, Ciaran McDonnell played in Keith Weekes but Paddy Dunican was quickly off his line to avert the danger.

As the game moved into injury time Andy Quinn’s fine volley was tipped over by Gregg Murray and, when Kevin Williamson’s corner kick broke back to him, he delivered a great ball into the area for John Drummond to power his header in at the near post. With seconds remaining Drummond got on the end of Williamson’s free kick and sent a looping header off the underside of the crossbar with Macdarragh O’Neill flashing the rebound into the back of the net to set the seal on an amazing victory.

Tullamore have now won their last five league games but they will never come closer to defeat as they did in this game. It is to their enormous credit that they were able to call on hidden resources of energy to pull off what can only be described as the greatest of all great escapes.

They travel to Dublin next Wednesday to take on Glebe North when they will be hoping to keep their fine run going. In what was an exceptional team performance there were excellent contributions from Brian Norris, Shane O’Connell and John Drummond, but the man of the match award went to their outstanding goalkeeper, Paddy Dunican.