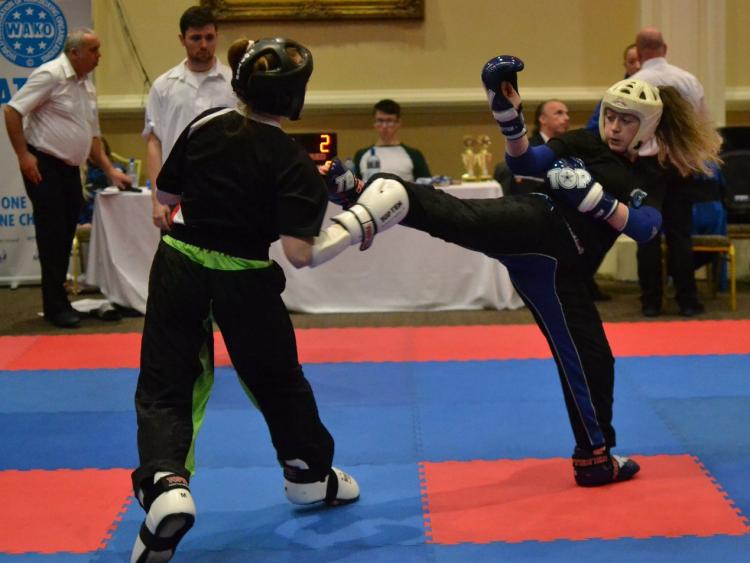 Hosted by Bushido Martial Art’s, the Rumble is always a top class competition and this year was no different. With most of the World Championship team still to return to competition, it was a chance for the younger kids to shine, and shine they did with magnificent performances all over the arena.

In the Under 7 section Callum Ryan, Alex Dunphy, Tyler Fetherston and Alex Garstea were in a huge division. All 4 competitors put up a brilliant show with Alex Garstea finishing with bronze losing out to the eventual section winner Calum Costello, indeed both Alex and Tyler lost out to Calum by a single score in the quarter and semifinals.

The Abourezk family were also out in force, Ahmed got on the podium with a silver medal in light contact, sisters Lena and Sara were also in fine form with Lena taking bronze. Kate O’Mahony had a tough fight against the very experienced Jodie Rochfort from Spartan Martial Arts while Reka Cummins secured bronze in her section. Orla McCann returning to
the scene of her national title in April followed it up with victory in the Senior -65 Kg section before also collecting the silver in the Junior section.

Brandon Tait was the last competitor of the day and returning from the world championships in Venice, he bagged a huge haul of titles, senior champion in -69 KG and -79 Kg before taking the prestigious Senior Open Weight Grand Champion section.

Brandon and brother Nathan had assisted Claire Brennan in coaching duties all day and Darren Tait, as usual, was refereeing to the highest standard.

Next weekend will be extremely busy for the club with Jay Daniels and Brandon Tait travelling to the UK for the Bristol Open, Ailish Kelly and Carbury Martial Arts attending the Kantanni Karate Do Clane tournament and Team Hurricane coach Arron Daniels competing in the ADCC Autumn Irish Championships in Husaria Naas MMA.