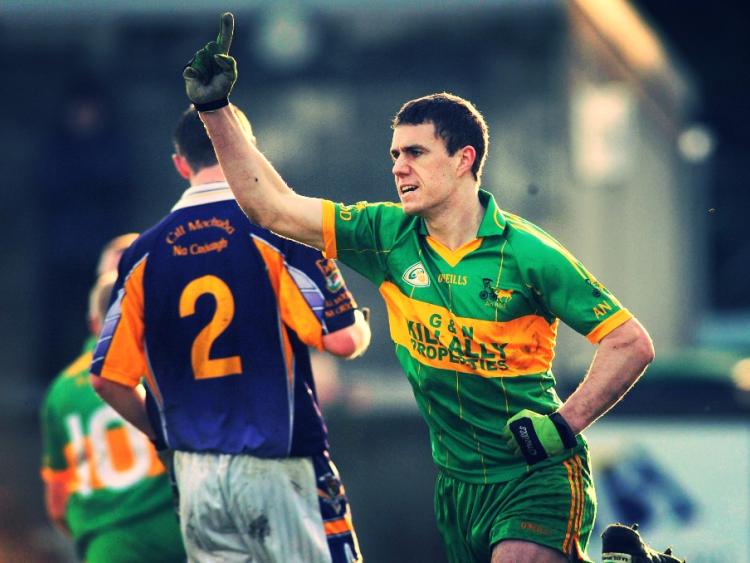 Stock image: Niall McNamee in action for Rhode in his prime

When Niall McNamee left the inter-county stage last year, the GAA world paid tribute, almost like he was crossing back over the white line for the last time.

That type of reaction often comes with players of Niall's ilk vacating the county jersey and therefore leaving the biggest platform. Niall McNamee made headlines during the 2000s despite Offaly's lack of success. But for a Leinster final appearance in 2006, Offaly spent much of McNamee's intercounty prime in the wilderness.

The county went back and forth between early-stage Leinster Championship matches and the grind of the qualifiers. They plodded along in the lower divisions of the league, far from the top of sports news agenda, and yet Niall McNamee made his name.

Widely held as a player of his generation and one of the best forwards in the country, even during spells of dominance from the likes of Kerry and Dublin, Niall gave 100% to the county from the tender age of 17 and into his 30s. While his county retirement saw him slip from the national sports pages, the talisman continued in the green and gold of Rhode.

At the weekend, he led the line for the village yet again, despite past heartaches of lost Leinster club finals and the rigours of commitment needed for three-quarters of the year in the county and provincial club game, he put in a near-Man of the Match performance, pipped only by Offaly county captain Anton Sullivan.

Niall collected 0-9 during the impressive victory over Ferbane in the county final, with 0-5 coming from play. He emerged from the corner to take ball, turn and score, but also ventured into midfield, winning primary possession and driving his teammates on. On more than one occasion he took the ball from his own fullback line and carried it into attacking areas.

John Maughan may not have the luxury of jotting Niall McNamee's name into the corner of his teamsheet this summer, but Offaly football certainly hasn't lost Niall McNamee. The club game comes first for most players and for the likes of Niall, the Darbys, Garrys, McPaddens, Sullivans, not to mention Niall's brother Alan who collected his 11th senior title on Sunday, that mantra is undoubtedly the focus.

Offaly continues to benefit from the presence and legacy of players like Niall McNamee. Many more knowledgeable football commentators would say that giving so much of your life to football is all the more difficult when your county is in the lower echelons. Niall is the epitome of that, and it hasn't been in vain.

At the other end of the pitch in Sunday's final, trying to stem the Rhode tide with his teammates, was Cian Johnson, Offaly's latest teenage sensation. Cian's future has been the source of much hype but his own singular focus on pulling on the Offaly jersey was inspired in part by Niall McNamee.

In an interview with the Offaly Express last year, the Ferbane starlet said, “When I was growing up in Offaly every young lad was out with a ball pretending to be Niall McNamee - that’s how good he was. Mirroring the mentality of Niall who broke onto the Offaly senior scene at the age of 17, he added, “football is number one in my life and everything else follows after.”

So, although unassuming and now in the twilight of his career, Niall McNamee remains a serious influence in Offaly football. When Niall was in the latter stages of his county career four or five years ago, Cian Johnson was tearing it up at the Cumann na mBunscoil finals, and here we are in 2018 with both of them on the same pitch.

Sunday in some ways felt like a baton being passed, but it was also a testament to enduring class, dedication and commitment, values hard to maintain and yet so vitally important to inspire future generations in weaker counties like Offaly. Niall McNamee isn't the only one, indeed many of Rhode's current crop play well into their thirties and have to show incredible commitment to keep their small club at the top. Three-in-row and their 29th senior crown speaks for itself.

Offaly doesn't really need the 'next Niall McNamee' or the next football prodigy; we just need lads with his attitude.