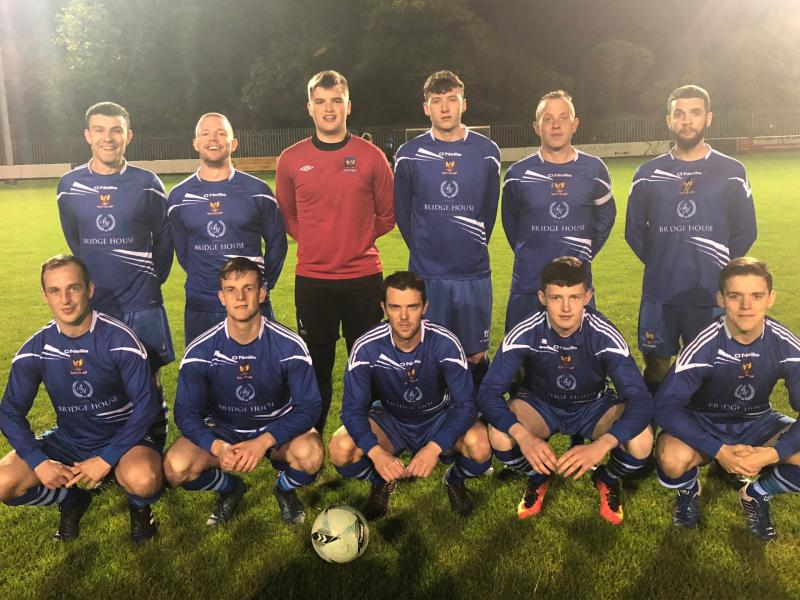 Tullamore came out the wrong end of an 11 goal thriller last Saturday in Leah Victoria Park in one of the most incredible games seen at the venue in recent seasons.

Indeed they came within 2 minutes of knocking their more fancied opponents out of the cup but Kilmore made it 4-4 in the dying minutes and then went on to finish the job in extra time.

Tullamore began brightly and had the ball in the visitors net when Derek Coolahan got on the end of a Mark Hayes through ball, but the goal was ruled out for off-side. The deadlock was broken on 15 minutes when, following a corner, Paddy Patton headed on to Dylan Kinsella who fired home from close range. With 20 minutes on the clock the home side equalised when Derek Coolahan sent Dean Carroll free on the right and, from an acute angle, he expertly drilled the ball into the far corner.

Kilmore hit back with Daryl Curly bursting through on the left but Mattie Hynes came to his side’s rescue with a great last-ditch tackle. Kevin Minnock created danger with a fine penetrating run on the left but he was crowded out but, with 27 minutes gone Tullamore jumped into the lead. Glen McEvoy played a great ball through to Derek Coolahan who brushed his marker aside before blasting the ball to the net from the edge of the area. With Kilmore still reeling Kevin Minnock curled his corner kick just outside the far post while, at the other end, Dylan Kinsella played in Shane Burke but Enda Ravenhill got back to clear.

With 40 minutes gone Celtic levelled when Daryl Curley got on the end of Conor Brown’s cross and sent a powerful header just inside the right post. With minutes remaining in the first half Brown picked out Paul McMillan who sent rocket crashing back off the crossbar as the interval arrived with the game tied at 2-2.

On the resumption, Kilmore picked up where they had left off with Paul McMillan getting on the end of Mark Lynch’s cross but he fired over and then Daryl Curly burst through the middle but his shot was charged down by Niall Gorman. With Gio Russo coming on Tullamore went back on the attack and, with 55 minutes gone, they regained the lead when Jay O’Reilly was penalised for handball and Derek Coolahan drove the resultant spot-kick into the roof of the net.

They increased their advantage on the hour when Coolahan was sent tumbling in the area by Aaron Kelly and he again stepped up to fire the penalty into the bottom right corner. Coolahan then turned provider when he played in Glen McEvoy but he fired over and then Gio Russo sent Kevin Minnock clear but his effort flew outside the post. With 75 minutes gone the visitors pulled a goal back when John Walsh got on the end of Paul McMillan’s cross and fired home from close range to bring his side back into the game.

As Tullamore hit back Dean Carroll went on a great run that took him past three defenders before being hauled down, with Gio Russo sending the free kick inches outside the right post. Kilmore began to tighten their grip on the game as John Walsh was denied by a great tackle from Sean Connolly and then McMillan broke free but fired past the left post. With minutes remaining they equalised when the Tullamore defence failed to deal with Daryl Curly’s dangerous cross and, as the ball broke loose,
Paddy Patton was on hand to fire home from 6 yards.

As the match drifted into injury time the visitors nearly won it when John Walsh weaved into the area but Dean Molloy
brought off a great point-blank save to deny him, with Glen O’Hanlon driving the rebound wide as the referee signalled extra time.

Within 5 minutes Kilmore had taken the lead when Paddy Patton pulled the ball back to John Walsh who crashed it into the back of the net. Tullamore hit back with Shane Martin picking out Gio Russo who fired past the right post while, at the other end, Ciaran Walsh found John Walsh, but he was denied by a fine save from Dean Molloy. Glen McEvoy played in Kevin Minnock but Aaron Kelly was equal to his effort and then Sean Connolly played a great ball through to Minnock but he was crowded out.

With 3 minutes remaining Kilmore struck again when John Walsh’s shot rebounded to Daryl Curly and he made no mistake from close range. Tullamore refused to lie down and, in added time of extra time, Gio Russo fired a free kick from 30 yards out into the roof of the net to bring the curtain down on a sensational game.