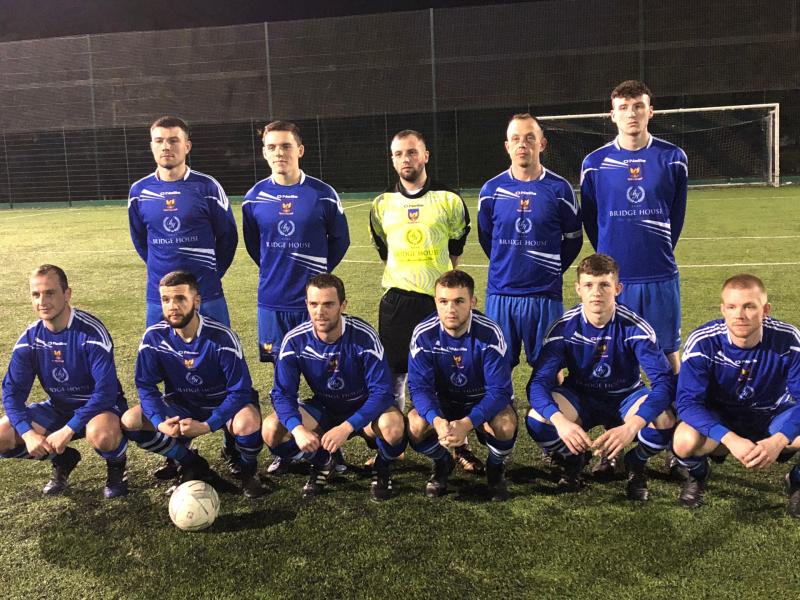 Tullamore made it four wins on the bounce when they travelled to Dublin last Friday and produced a barnstorming performance to sweep Inchicore Athletic out of the Metropolitan Cup and book their place in the second round.

Lining out without their regular centre back pairing of Brian Gill and Robbie Shine their stand-ins, Stuart Carroll and Ross Kinnarney, were outstanding. Add to that the creativity of Kevin Williamson, Stephen Francis and Enda Carroll in midfield together with the direct running of Robbie Bracken and the energy of Brian Francis up front and you had an irresistible combination.

They posted early intent when Brian Francis nearly dispossessed the home keeper and then Stephen Francis picked out Robbie Bracken who flashed his shot past the right post. Inchicore went close when Jack Cronin broke free on the right and fired in a low cross that just missed out the in-rushing Conor Bolton and then Derek Roache and Cronin combined to pick out Bolton, but Ross Kinnarney got across to cut out the danger.

With 20 minutes gone a wonderful weaving run by Robbie Bracken carried him into the area but his effort drifted outside the right post. Tullamore had a major scare when Jack Cronin pulled the ball back to Dean Power on the edge of the area, but he fired wide when he really should have hit the target.

Corey O’Rourke sent Sean Plunkett free on the right but Anto Kavanagh got back to clear as the visitors began to tighten their grip on the game. Kevin Williamson played a lovely ball through to Robbie Bracken who fired it across the face of the goal and then John Drummond, Enda Carroll and Bracken combined to play in Brian Francis, but Patrick Reilly made a great point blank save to keep his side in the game.

With 38 minutes on the clock Tullamore made the breakthrough when Brian Francis picked the ball up from a throw-in and played it inside to Robbie Bracken who drilled it into the back of the net. Minutes later Bracken hit the net again when he fired a rocket into the top corner from 25 yards only for the referee to adjudge that he had controlled the ball with his arm.

They were not to be denied on 42 minutes when great play by Kevin Williamson saw him slide the ball through to Brian Francis who drove it into the bottom left corner of the net. The home side nearly reduced the arrears when Dean Power released Corey O’Rourke but Dean Molloy was quickly off his line to save at his feet as the referee brought the first half to a conclusion with Tullamore two goals to the good.

Inchicore went on the offensive on the resumption with Jamie Cogan picking out Jack Cronin on the right but his low cross was cleanly taken by Dean Molloy and then Leon Fahey Byrne’s swerving cross was headed off the line by Shane O’Connell. As Tullamore hit back a fine run by Robbie Bracken saw his effort deflected narrowly wide while, at the other end, Lee Gibson and Sean Plunkett combined to pick out Jack Cronin but he fired past the left post.

Stuart Carroll went close when he got on the end of Kevin Williamson’s free kick but Patrick Reilly somehow managed to keep his close range header out and then great work by Stephen Francis created an opening for Brian Francis but Reilly again came to his side’s rescue. With 75 minutes gone they struck again when a lovely move involving Stephen Francis and Shane O’Connell saw Brian Francis crashing his shot off the underside of the crossbar with Robbie Bracken reacting first to bundle the ball over the line.

With John Paul Casey and Brian Norris coming on they continued to press and Casey was straight into the action when he sent Enda Carroll clear, but he was stopped in his tracks by a fine relieving tackle from Jamie Cogan. Lee Gibson played in Ian O’Brien but his effort flew well wide while good play between Kevin Williamson and Stephen Francis picked out Robbie Bracken on the left but his low cross was hacked clear as the visitors ran out comfortable winners.

While Inchicore contributed hugely to a very enjoyable cup tie they were eventually blown away by the sheer intensity of the Tullamore play. They are at home to Greystones United this Friday when they will be hoping to further establish their promotion credentials. In what was a wonderful team performance there were exceptional contributions from Ross Kinnarney, Kevin Williamson and Brian Francis, but the man of the match award went to Tullamore’s outstanding central defender, Stuart Carroll.

Tullamore Town are at home to Greystones United in the Leinster Senior League this Friday, 5th October, in Leah Victoria Park, kick-off 8.00 pm.