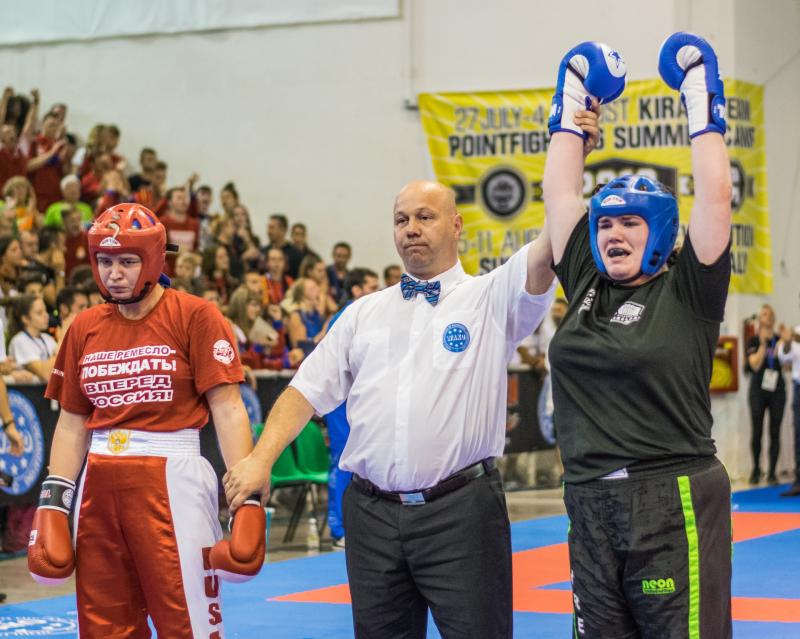 Take note of the name, Jordan Doran, a superstar of the recent World Association Of Kickboxing Organisations (WAKO) World Championships for Cadets and Juniors.

The Derrinturn girl who is in her Leaving Cert year in Oaklands Community College in Edenderry was the toast of Team Ireland as she made history in Jesolo, Italy by being the first Irish competitor to reach three finals in the same championships in Pointfighting, Light Contact and Kick Light.

Jordan who is part of Red Star Kickboxing under Jon Mackey the national Light Contact/Kick Light coach and trains with Team Hurricane for Pointfighting under Jay Daniels in Edenderry. She describes herself a 'Red Hurricane.'

On the Light Contact front, Jordan notched wins against Greece and Hungary to put her into the final on Saturday morning. After a slow start against her Russian opponent, her fans were nervous but true to form, she picked up the pace up in the 2nd round before powering ahead in the 3rd to take the World title with ease.

In Kick Light, she received a bye to the semi-final where she beat Greece again to set up another Saturday final appearance. The 21 x 2 minute rounds over the previous days were starting to take their toll and her Hungarian opponent sensed this, a bright start was slowed down with a visible limp and the scores swung to the opposition. As the 3rd round advanced the leg
kicks were taking their toll and Jon Mackey took the correct decision and called Jordan in to forfeit the fight. She came away with the silver medal.

In Pointfighting, Jordan had three hard fights during the week, with wins against Italy and Poland before a huge
semi-final v Hungary. This one went all the way and Jordan won 20-19 in the last second before falling to her knees to a giant hug from coach Claire Brennan. By the time the final came around on Saturday, Jordan was battle-scarred, bloodied
but unbowed. Chelsea Legett of Team GB, an old friend and opponent, was her opposition, and again Jordan made a bright start. Despite this, she was eventually beaten on a 13-10 scoreline, once again securing a silver medal.

Jordan left the stadium with the Irish support chanting her name and draped in the tricolour. She continues to be a name on the lips of kickboxing experts, a fighter with a serious future and three more World Championship medals in her back pocket.