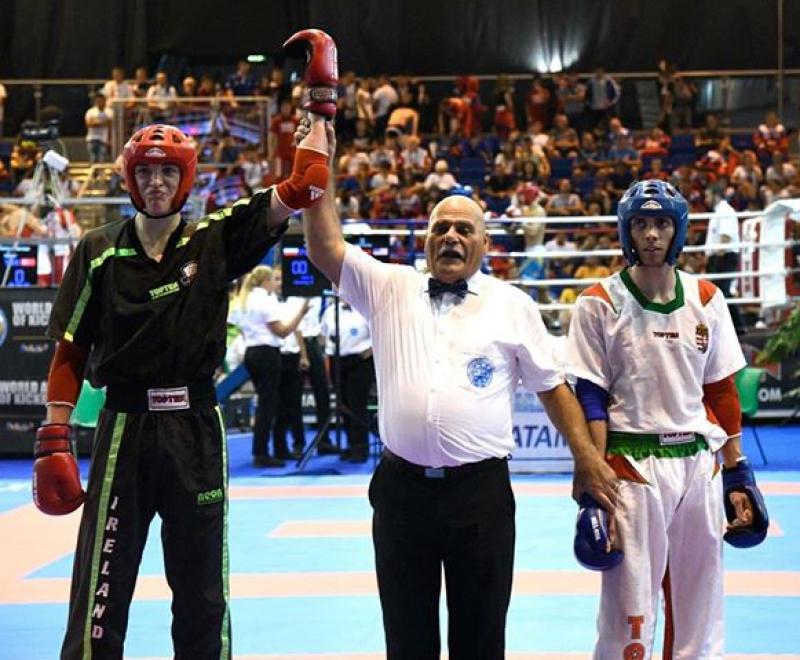 A local kickboxer has become a world kickboxing champion at the WAKO Junior World Championships which were held in Jesolo, Italy last week.

Over 3,000 participants competed in various disciplines and one of those was 18-year-old pointfighter, Conor McGlinchey from Carbury, not far from Edenderry.

Conor trains with Tallaght Martial Arts in Dublin under the guidance of Dave Heffernan and Martin Bannon. This was Conor's last year as a junior and he successfully fought his way to the Gold medal, defeating Norway, Slovenia, Greece and Hungary in the -79kg category.

Conor has fought in six Championships since he was 12 and has reached the final five times. He is now a two-time World Champion, European Champion and has also claimed many other titles at home and internationally.

Conor recently completed his leaving cert and plans to study criminology in UCC next year but as for this academic year, he is preparing to move to the USA where he is a member of ASG sponsored Team Proper. There he will train and compete with the team that is run by the San Francisco based Junior Salientes.

Before he heads stateside Conor will be stepping up to senior level as he is now a member of the Irish Senior Team. Ireland ranked 4th out of 63 countries in the medal tables in the recent championships, an incredible achievement for our small country.

What is even more outstanding is that these young athletes receive no government funding and their entire trip and gear is financed by their families and from any corporate sponsorship they can obtain.

Conor is extremely grateful to The Johnstown Estate near Enfield for sponsoring his training programme. Conor says, "the sacrifices my family have made over the years in order to support me are huge and that makes this win even more special."

Although only back from Italy a few days ago, this extremely disciplined World Champion has already returned to training and is preparing for his next challenges.

Conor gladly advises and mentors younger athletes and he is hugely respected in the kickboxing world as a gentleman as well as an outstanding athlete with a bright future.