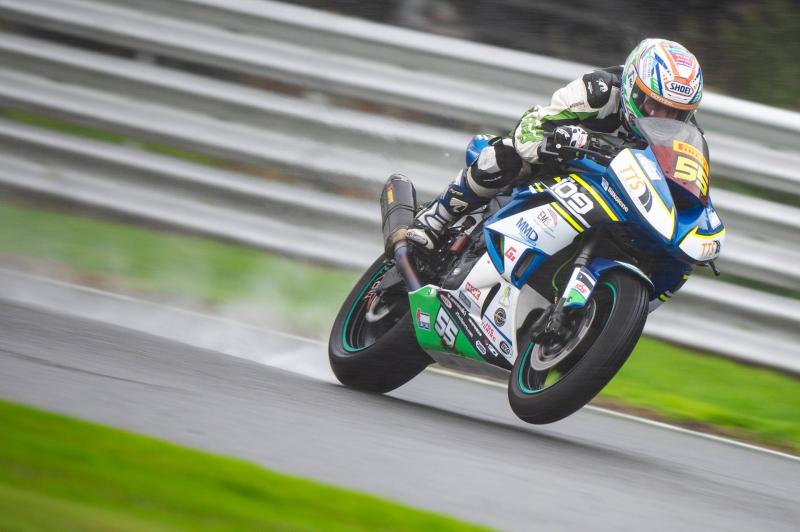 In the Pirelli National Superstock 600 class at Oulton Park last week, Offaly's Kevin Keyes had one of his most consistent weekends this season, setting a solid pace early in the weekend, finishing inside the top five in both a dry free practice one and a wet free practice two on Friday.

Sitting inside the top ten throughout all of qualifying on Saturday morning, Kevin went out for a final stint in the closing few minutes, and a great lap saw him jump onto the front of the second row, finishing the session in an
excellent fourth position.

In what was an incredibly wet race on Sunday afternoon, Keyes started the race smoothly, running as he had done all weekend inside the top five. As the race reached its halfway point Keyes began to close the gap to the riders ahead, passing firstly Joe Sheldon-Shaw, before having a great battle with Milo Ward for the final spot on the podium.

In tough conditions, Keyes brought the Team #109 Kawasaki ZX6R across the line in an excellent third position, matching
the result he scored at the first Oulton Park event back in May.

Speaking about his return to the podium, Keyes said; “I really enjoyed the race to be honest, even in the wet conditions. After
starting the race being just a little too cautious, I found myself battling in and around fifth and sixth in the opening laps. I had a big gap to close to the front but as I settled in I managed to close in the boys ahead and could see them coming back to me."

"I was feeling more and more comfortable on the bike and in the conditions, and I was able to get by and make it back onto the podium. I can’t give enough credit to my Dad and my team, including my teammate Eunan McGlinchey for getting the complete wet setting wheels and springs into my bike in under five minutes, it was incredible."

"I’m delighted to be back on the podium and bring some more silverware back to the Team #109 camp.”

A delighted Team #109 team manager Paul Tobin commented: “We had a good setting for Kevin all weekend and when things are right for him he can push. He had a good qualifying that put him fourth on the grid for the race. The team did a fantastic job as it was all hands on deck when we had less than five minutes until pit lane closed to get the bike from full dry settings to wet. Kevin goes well in the wet and proved that again in the race, a great podium and just rewards for the team's hard work all weekend."