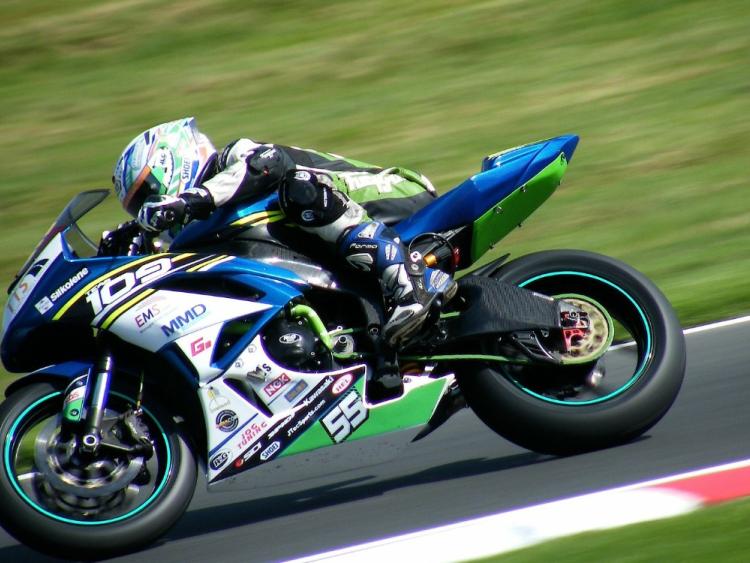 Kevin Keyes proved his class at Silverstone last weekend despite not winning when he made up an incredible 18 places from the back of the grid during a race in the British Superstock Championship.

In a busy schedule for the famous track, Keyes’s class, the Superstock 600’s were first out on Friday morning for their first free practice.

In a good session, he completed over 20 laps finishing in 6th place. His second session in the early afternoon, however, brought problems with a fluid leak within his bike.

Over Friday evening and Saturday morning, Kevin’s father Ron and the team stripped down the bike, repaired the leak and re-built the bike in time for qualifying at 12:45pm.

Keyes started qualifying well, keeping within the top 10 before bad luck struck again. He entered the pit lane after just 9 laps with another technical issue.

Initial inspection led to fears that there was a major problem with the bike, but a further strip-down determined an electrical part had failed. With him completing just those 9 laps, all other riders had finished qualifying with quicker lap times meaning he had to start Sunday’s race from the back of the grid.

Ron and the team had the failed part replaced and the back together again in time for Sunday's race start. Keyes got a good start off the line, and after just 6 laps he had battled his way through to 9th place.

He briefly slipped back to 10th before finishing strong to take the flag in 8th spot.

"After such a tough beginning, only getting a few laps for qualifying and being last on the grid, I’ll take that result all day long," the 2017 Offaly Sports Star of the Year said.

Kevin also thanked his team for incredible work over the weekend. "A huge thanks to my whole team, my Da, Colin Draper and Paul Tobin and Team109 for all the efforts to get everything sorted."