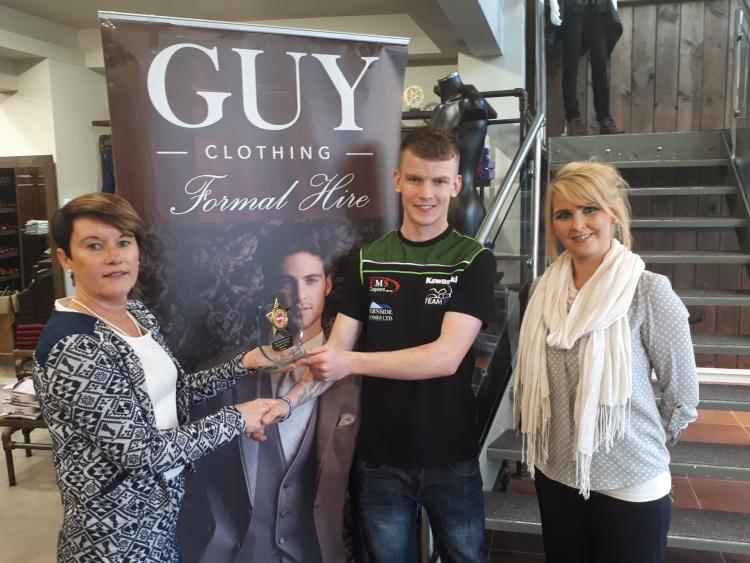 The Offaly Express/Guy Clothing Sports Star of the Year for 2017, Kevin Keyes, is flying high in the British Superstock race series this year, and despite an injury recently, is well in contention for a podium finish by the end of the year.

However, supporting such a campaign in the UK is an expensive endeavour for the rising star, and now the Kevin Keyes Supporters Club have announced a fundraiser to keep his career on the road.

The club was formed in November 2015 with the intention of not only having a platform to show support but to also try and raise funds to help Kevin Keyes who had just completed his first year competing in the UK.

A meeting with Kevin and his father Ron at that time showed the Supporters Club the financial situation that faced Keyes to go racing the following year, his first year racing in the BSB Superstock class.

The club put together a fundraiser in February 2016, raising €6,500 to kickstart Kevin's fledgeling career in racing.

Such was the success of that fundraiser, the club is once again putting the final touches to another event on September 23.

The event will take place at Highfield Golf Club, just outside Kevin's hometown of Edenderry, and will feature a Honda 50 fun run, tractor, car and boke display, as well as a unique footgolf tournament.

Derrick Dunne of the Kevin Keyes Supporters Club told us, “a few more lads have come on board with us this year and we decided to use their individual experience to organise this event."

"Greg O'Reilly, Ryan Monaghan and Stephen Dunne will be looking after the Honda 50 run which includes any ‘big bikes’ that wish to come. Ned Dunne from the Shamrock Vintage club will keep the vintage cars and tractors on the right route, while myself and my wife Jean will be taking care of the ‘Footgolf Fun Classic’ on the day."

"We will also be holding a small raffle on the day, with one of the prizes being a kids Go-Kart from New To You Go-Karts."

Tickets will be on sale from next week and can be bought online via PayPal, and you can check the Kevin Keyes Supporters Facebook page for more details.

Derrick said the group wanted to thank everyone that has supported their events in the past and expressed hope that this year, a good crowd turns out to show Kevin support once again.

Kevin will be in attendance himself with his Fernside Homes Kawasaki, and he says, "come along and get a photo with me,
I'm really looking forward to a great days fun.”

So for what looks like will be a great day of fun, why not head out to the Highfield Golf Club and support our Offaly Sports Star of the year.

Find out more by clicking here.