Tullamore edged out by Mountmellick in CCFL 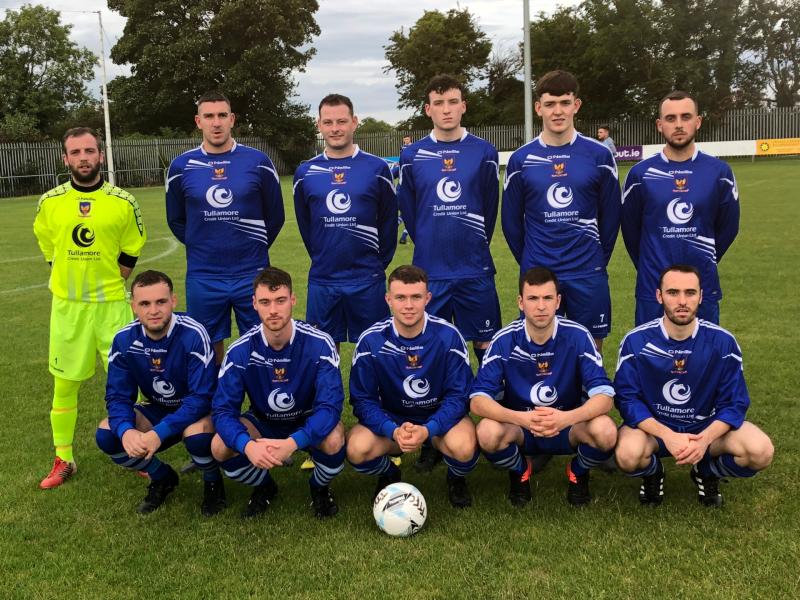 Tullamore edged out by Mountmellick in CCFL

Tullamore travelled to Mountmellick last Sunday and, despite enjoying the lion’s share of possession, left empty-handed as the home side produced a battling performance that saw them safely over the line. The visitors were first to threaten with Mark Hayes going on a fine run on the left before picking out Anto Kavanagh but his effort was too high.

Mountmellick hit back with Keith Ryan playing in Darren Strong but Paul McTigh got across to cut out the danger. With 5 minutes gone Tullamore nearly opened their account when the ball broke back to Macdarragh O’Neill in the area but Martin Forde brought off a great point-blank save to deny him.

As the game continued to ebb and flow John Watchorne went close when, following a corner, his glancing header drifted outside the left post. Tullamore went back on the attack and good play by John Drummond on the right saw him cut the ball back to O’Neill but he fired over. With a quarter of an hour gone Enda Ravenhill played a lovely cross-field pass to O’Neill but his well struck effort flew inches outside the left post and Ravenhill was again in the thick of the action when he got
on the end of Kavanagh’s through ball, but his low cross just missed out the inrushing Ted Conway at the far post.

Within minutes Mountmellick had taken the lead when Robbie Condron was taken down in the area with Gary Pender driving the resultant spot-kick into the bottom left corner of the net. They nearly increased their advantage when Darren Strong put through Keith Ryan but Dean Molloy brilliantly smothered his effort down low to his left.

With 35 minutes gone Barry Welsh picked out Paul McTigh and he played a great ball through to Anto Kavanagh, but Martin Forde again came to his side’s rescue with a fine save. Minutes later Tullamore levelled the match when a surging run through
the middle by John Drummond saw him taken down 25 yards from goal and Jack Goodings curled his free-kick just inside the right post to put his team back in the game.

They were now in full flow as Macdarragh O’Neill threaded the ball through to John Paul Casey and his low cross was fired narrowly wide by John Drummond. As the pressure continued to mount Drummond again created danger when he got on the end of Ted Conway’s pass and skipped around the advancing keeper, but his effort flew into the side netting as the
referee brought the first half to a conclusion with the scores tied at 1-1.

Straight from the restart Tullamore went into the attack and nearly took the lead when Anto Kavanagh’s 30-yard free-kick came crashing back off the crossbar. They again went close when Kavanagh picked out Macdarragh O’Neill in the inside left channel but he screwed his shot wide when well placed.

With Ben Connolly coming on for the injured John Paul Casey they continued to press but, with 55 minutes gone, Mountmellick
regained the lead when Darren Strong picked the ball up from a throw-in and blasted it into the far corner for a fine goal. They now had the bit between their teeth as Enda Ravenhill did well to block Robbie Hibbitt’s shot and then Strong’s free-kick flew inches outside the right post.

With Niall Bracken and Dave Malone coming on, Tullamore tried to wrestle back control of the game but the tough-tackling home rear guard repeatedly shut them out. With 10 minutes remaining Mountmellick should have put the game to bed
when, following a free kick, the ball broke to Conor Comiskey in the area but Dean Molloy produced a remarkable save to somehow turn his close-range effort over the bar.

Overall this was a frustrating outing for Tullamore. Despite dominating for long periods they were unable to produce the killer pass or the clinical finish that their good play deserved.

On the other hand, Mountmellick demonstrated a grit and determination which ultimately saw them run out deserving winners of a very entertaining game. For Tullamore there were excellent contributions from Mark Hayes, Jack Goodings and Anto
Kavanagh, but the man of the match award went to their outstanding goalkeeper, Dean Molloy.