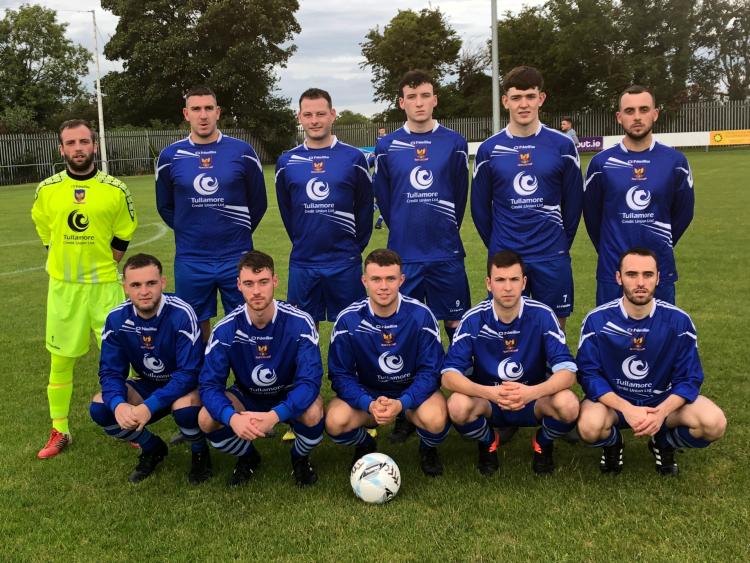 Tullamore got their CCFL Senior Division season off to a flying start in Leah Victoria Park last Saturday as they edged out a very good Derry Rovers side in a seven-goal thriller.

They were quickly out of the blocks and within minutes had jumped into the lead when Andy Quinn and John Drummond combined to send Macdarragh O’Neill free on the right and his low cross was swept home by John Paul Casey from close range.

With only 5 minutes gone they increased their advantage when, following a corner, Jack Goodings was taken down in the
area with Drummond firing the resultant spot kick into the bottom left corner of the net.

Rovers tried to get back in the game with Vincent Poole playing in Mick Murphy, but he failed to get enough purchase on his shot and Dean Molloy saved comfortably.

With quarter of an hour gone they reduced the arrears when Jonathan Harding won a corner on the right and, when the ball was played in, Aaron Howley rose above the defence to send a fine header into the top right hand corner.

With 25 minutes gone Tullamore nearly restored their two goal advantage when Ted Conway fired in a great cross from the left
but Macdarragh O’Neill’s glancing header flew inches outside the right post. They again went perilously close when O’Neill won possession in his own area and raced the length of the pitch before laying the ball off to John Drummond, but his well struck effort was brilliantly turned onto the crossbar by Jimmy Dunne in the visitor’s goal.

O’Neill was proving a persistent thorn in the Rovers defence and he again created danger when he latched onto a long clearance but Stephen Murtagh managed to hook his low cross to safety. With 33 minutes on the clock Enda Ravenhill played a lovely ball through to John Paul Casey who picked out John Drummond in the middle, but he fired over when well
placed.

As the pressure continued to mount Brendan Bracken just failed to get on the end of an O’Neill cross while, at the other end, Ross Kinnarney got across to clear as Dillon Richie threatened to break through. With 42 minutes gone the visitors levelled the game when good play between Harding and Clarke saw them pick out Mick Murphy on the edge of the area and he blasted the ball home at the near post.

Tullamore twice went close when Dunne did well to keep out Brendan Bracken’s forty yard pile-driver at full stretch and then Ted Conway played the ball inside to Macdarragh O’Neill, but his effort curled just outside the post as the referee brought the first half to a conclusion.

On the resumption Derry Rovers went straight onto the attack with Jonathan Harding releasing Mick Murphy but he was stopped in his tracks by a crunching tackle from Brendan Bracken. They nearly hit the front on 50 minutes when Dillon Ritchie played in Harding but Dean Molloy pulled off a great point blank save to deny him.

With Des Coolahan and Niall Bracken coming on Tullamore hit back with John Paul Casey firing past the left post and then, following a free kick, Jack Goodings pulled the ball back to Ross Kinnarney but Jimmy Dunne did well to keep his effort out. Molloy was called into action when he pushed Aaron Howley’s shot around the post and Howley again created danger when his well struck free kick came back off the keeper to Harding but, just when he looked certain to score, Ross Kinnarney produced a great relieving clearance to keep his side in the game.

With Dave Maloney and Ben Connolly coming on they redoubled their efforts and with 85 minutes on the clock they regained the lead. Maloney won back possession in midfield and picked out Macdarragh O’Neill who threaded the ball through
to Jack Goodings in the inside left channel and he drilled it into the bottom right corner of the net.

Within minutes they had opened up a two goal gap when lovely approach play by Ben Connolly, O’Neill and Goodings saw Des Coolahan race through to hammer the ball past Jimmy Dunne.

Derry Rovers refused to throw in the towel and Dean Molloy had to produce a superb save to keep out Aaron Murphy’s wicked free kick. With seconds remaining they reduced the arrears when Jonathan Harding got on the end of Mick Murphy’s low cross to fire home from close range but Tullamore held out to lay claim to all three points.

This was a wonderful curtain raiser to the new season with both teams contributing to an exhilarating game of football. For Tullamore there were excellent contributions from Brendan Bracken, Ross Kinnarney, Macdarragh O’Neill and John Paul Casey, but the man of the match award went to their tireless midfielder, Jack Goodings.

Tullamore are at home to Edenderry Town in the LSL next Wednesday, August 29, kick-off 7.45 pm in Leah Victoria Park.