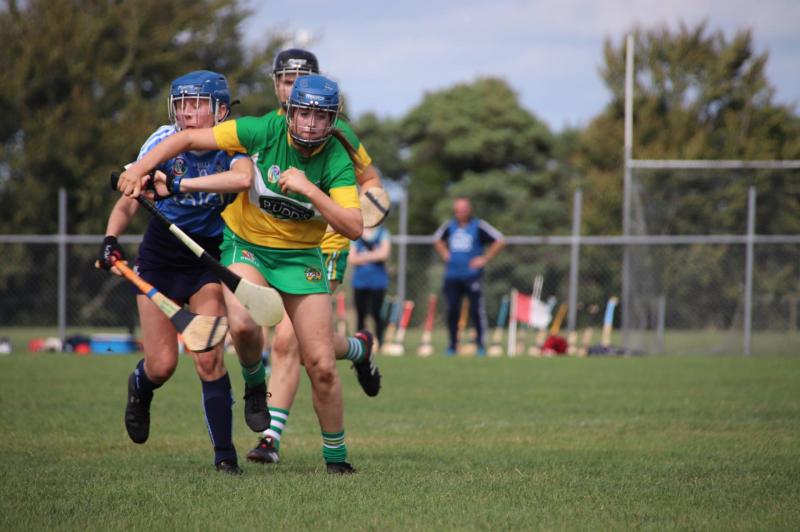 Aoife McLoughlin in action against Dublin on Saturday

The Dublin Premier Juniors powered their way past Offaly last Saturday afternoon in Coralstown/Kinnegad GAA to secure their place in September’s All Ireland Final in Croke Park for the second year in a row.

The Dubs dominated the game from start to finish as Offaly struggled to play to their full potential. This game closes the curtain on the premier junior teams’ campaign having lost to Limerick in the opening round but defeating Kerry and Clare in the group stages.

Kerry topped the group on score difference and went on to defeat Roscommon in their semi-final on a scoreline of 1-15 to 1-5.

Goals win games is the old cliché and unfortunately for the Offaly junior camogie team this truth rang home as they exited the championship at the hands of Dublin.

Aoife Walsh set the pace of the game hitting a free in the opening minute to push Offaly in front. Aoibhe Dillion answered this point and followed up with a second moments later. A nice point from Caragh Dawson in the 7th minute Gabe Dublin the lead for the first time, a lead they wouldn’t relinquish for the remainder of the game.

Another excellent effort from Aoife Bugler stretched Dublin’s lead to two. Dublin’s running game and superior passing began to cut holes through the Offaly defence. A big turning point in the game was mid-way through the first half when Offaly centre back Brooke Whelehan was yellow carded for a poor tackle which resulted in a penalty for Dublin. Up stepped Aoibhe Dillon but her shot was blasted to the right and wide.

Dublin were now completely on top and dominating the halfback, midfield and half forward lines. They relentlessly drove at the Offaly defence which was starting to creak under the intense pressure. Points from Aoife Walsh and Aoibhe Dillion extended Dublin’s lead as the game was slowly slipping away from the faithful. Dublin almost put the game to bed before the break but Shannon Touhy, who has been excellent all year spurned a number of goal chances to keep Offaly in the game. Aoibhe Dillion and Aoife Bulger added two more points to make it 0-8 to 0-2 in favour of Dublin.

Dublin would strike a telling blow in the second  minute of the second half as a well worked move resulted in full forward Aoife Dillion smashing the ball to the back off the net for the first goal of the game. Aoife Bulger added Dublin’s ninth point of the game before Offaly hit a slight purple patch. A well worked move from mid-field to the forward line found the sliotar in the path of Naomh Brid’s Mary Teehan and she made no mistake to raise the green flag and provide Offaly with a lifeline.

It seemed Offaly were starting to come into the game and play their game plan but two missed frees from Aoife Walsh dampened the spirits of the midlanders. It got worse for Offaly in the 45th minute when centre back Brooke Whelehan received a second yellow card and subsequent red.

Dublin finished the game strong with points from Aoibhe Dillion, Caragh Dawson and Nadine Murphy. Two minutes later Offaly’s Aoife Walsh reduced the deficit to eight, but that was to be the last score of the game for the girls from the Faithful County.

The last five minutes were not a true reflection of the game as Aoife Bulgar put the game to bed as she grabbed the girls in blue’s second goal of the game. Just sixty seconds later, Dublin’s third green flag was raised by Laoise Quinn. Dublin did try to score a fourth goal but another excellent Shannon Touhy save put the ball out for a ’45 and this would be the last play of the game.

What’s next: Dublin face Kerry who beat Roscommon in the other semi final on Sunday will face Dublin while Offaly players now return to the club championship. There is a lot of potential in this group of girls and had the group that finished the campaign been together in the Leinster campaign and opening round against Limerick Offaly might have booked an easier semi-final spot against Roscommon.