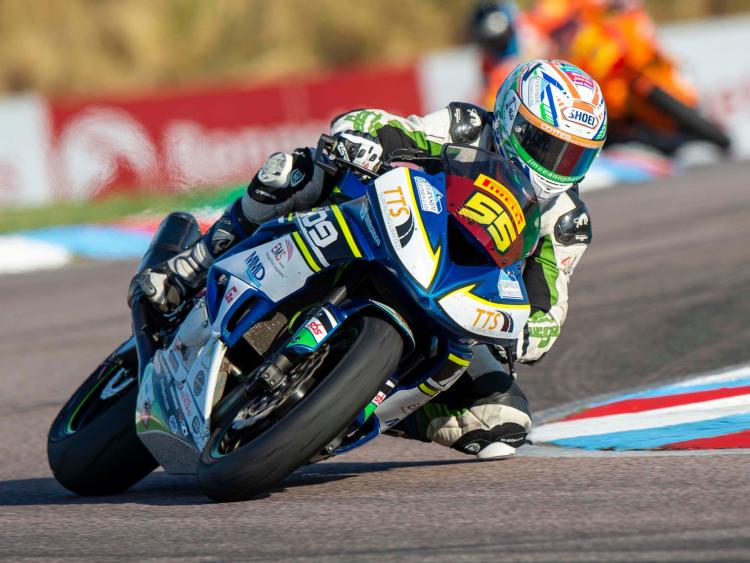 Offaly motorcycle racer Kevin Keyes has remained in the Top 3 despite a difficult weekend in the Pirelli National
Superstock 600 class championship at Thruxton.

Keyes had a solid start to the weekend on Friday morning, finishing the opening free practice session in tenth position. Making a few set up changes in an effort to improve his time and position in free practice two in the afternoon, Kevin managed to take almost three quarters of a second off his time from earlier in the day, but remained in tenth positon in the standings.

As qualifying got underway on Saturday afternoon, Keyes struggled with the set up of the Kawasaki ZX6 in the searing heat of Thruxton, and could only score thirteenth position on the grid for Sundays race. With no warm up for the class scheduled on Sunday morning, the Superstock 600 riders were given a third free practice on Saturday evening to test out any changes before Sundays race.

As Kevin took to the track in the evening sunshine, he broke back into the top ten following on from a difficult qualifying, finishing the session in ninth position, giving himself a solid footing which to go into the race the following morning.

As the lights went out for the beginning of the sole Superstock 600 race, Kevin was making excellent progress, breaking into the top ten in the early stages, and by the halfway point was in a battle for seventh. However, following some issues as the race came into the closing stages, Kevin dropped back from the pack, but still managed to bring the ZX6 home in tenth to score more solid points in the championship, keeping him inside the top three.

Recapping over a difficult weekend Keyes said; “Thruxton was a very tough weekend for me as I struggled to get the bike set up I wanted throughout the weekend. After a chat with my team we made some changes for the race that I was happy with."

"When we started the race I felt really comfortable, and felt like we had great pace doing a 1:19.5 lap time straight away, in traffic, almost a full second quicker than I’d gone all weekend, which was also the third fastest finishing lap time.”

“I felt we could have had a good race, but unfortunately we had an issue, but it will be all resolved and I’ll be back fighting for Caldwell. Taking the positives we are still holding third in the championship, it was another top ten finish, and I’m home in the same condition I went. A big thanks to my team and to all my sponsors.”

Keyes and Team #109 will be back in action once again at Cadwell Park in a fortnights time when Kevin will represent the team at the Louth circuit.