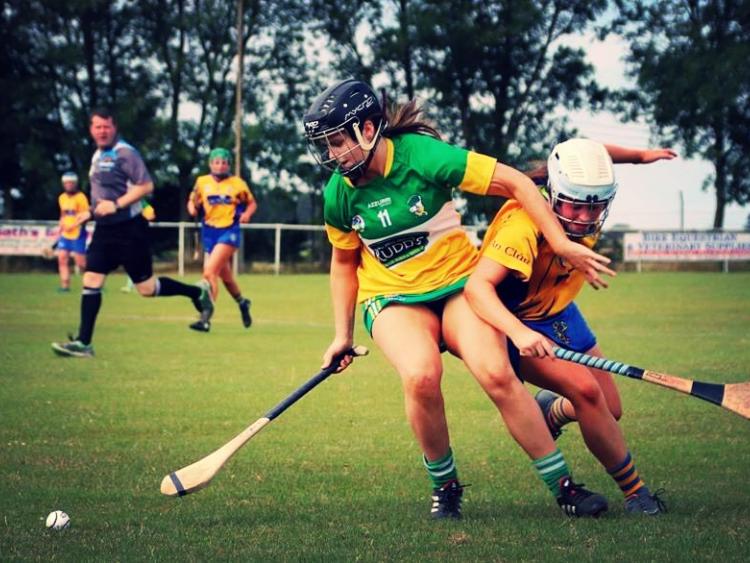 The Offaly Junior camogie team got their first win of the Liberty Insurance Premier Junior camogie championship last Saturday evening with a one point win over Clare.

Last weekend, Offaly suffered a one point defeat to Limerick in Limerick in their opening round. This game was played in a sunny Drumcullen, and Aoife Walsh was the star of the show with a last minute free to edge Offaly in front and move Offaly into second in the table ahead of Limerick and Clare.

It was a real battle of the free takers as Aoife Walsh and Sinead Power scored 0-14 points between them. Power of Clare was the main threat fo and she opened the scoring of the game with a free. This was quickly answered by an Aoife Walsh free and this was the first of her seven frees.

Offaly dominated in patches and had the Faithful put these patches together this game would've been over very early on. Then the moment of the match came when Mary Teehan snatched the ball from the Clare offender and put the ball over the bar. This was followed up less than 20 seconds later with a goal following some good play between Mary and full forward Kaitlyn Kennedy.

This gave Offaly a comfortable cushion, however Clare would answer with two points from Sinead Power and one from Laura Hayes, meaning the game was level halfway through the first half. Aisling Cahill then added Clare's seventh point of the game to put them in front for the first time. Again deadly accurate from placed balls Aoife Walsh converted her third free of the game leaving it level at half-time Offaly 1-4 Clare 0-7.

Offaly began the second half with intent, a huge Orla Gorman score was followed up by a Kaitlyn Kennedy point and again Offaly looked like they were cruising. Clare kept their composure with Sinead Power's frees keeping them within touching distance.

Three points on the trot from the stick of Power meant the game would finish tip for tap. Offaly had plenty of chances to push on but some over-played possession and passes left Offaly feeling the pressure in the final stages. Clare goalkeeper Edel McNamara had a very busy day between the posts defending numerous shots throughout the game. However a final score from Aoife Walsh would finish the game and a win for the deserving Offaly outfit.

This was a very good team performance from Offaly. Shannon Tuohy in goals was excellent, her long range puckouts were a joy to watch reaching Clare’s 45 meter line and further in the second half. The full back line were very tenacious and worked hard to avoid scores from play. Eileen Bracken, Brooke Whelehan and Sarah Guinan had great games defending the goal.

Orla Gorman covered plenty of ground in mid-field and both defending and popped up for a point when it was needed in the second half. St.Rynaghs Aoife McLoughin also had a great game mid-field. The half forward-line of Leah Gath, Aoife Walsh and Rachel Guinan caused plenty of headaches for the Clare defence. Kaitlyn Kennedy, Mary Teehan and Sasha Connolly kept the full back line very busy, Kennedy causing havoc at full forward.

Manager Declan Loughane also introduced plenty of subs which no doubt will mean competition for places come Offaly’s final round game against Kerry on August 4. With a win against Kerry and other results going their way, an All-Ireland semi-final slot awaits on August 18.