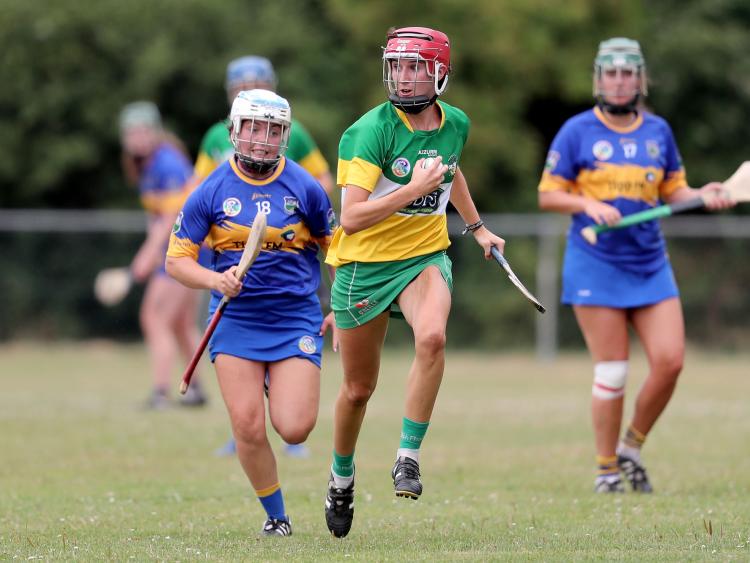 Michaela Morkan on the attack for Offaly against Tipperary. Picture: INPHO/Dan Sheridan;

A STUNNING goal off the sod by Grace O’Brien in the fourth minute of injury time secured a smash-and-grab 1-14 to 2-10 victory for Tipperary over Offaly in the Liberty Insurance All-Ireland Senior Camogie Championship at The Ragg.

The result moves Tipperary into pole position for a Quarter-Final spot along with Dublin, with Offaly needing to overcome Group 2 table-toppers Cork in the last series of round-robin games to keep their hopes alive.

It was tough on Mike Wall’s gang as they controlled the game in the second half thanks to Sarah Harding, Debbie Flynn, Michaela Morkan and player of the match Róisín Egan. Mind you, Tipp were excellent in the opening period, Cáit Devane hitting five points, but they still trailed by 2-3 to 0-8 at half time due to goals from Siobhán Flannery and Harding.

Team captain Orla O’Dwyer – playing her second full match of the day after lining out for the footballers earlier– equalised with a sublime score but Offaly were three in front entering added-on time and apparently on their way.

The game turned on two Devane frees drilled into the square from 30m. The first was deflected over the bar to cut the deficit to two. The second was blocked, only for O’Brien to strike first time and rattle the net, to the delight of the home supporters and desperation of the visitors.

Elsewhere Dublin produced a second-half rally to record a 1-14 to 0-13 win over Wexford at the Bellefield complex in Enniscorthy.

Orla Began and Linda Bolger swapped points early on and the sides were level on 0-3 each after 18 minutes. Joanne Dillon was among the scorers as Wexford hit the next three to open up some daylight and lead by 0-7 to 0-4 at the interval.

Dublin were a different team in the latter period, hitting four points without replay to hit the front. Stacey Kehoe and Bolger steadied the ship for the home team but a goal and two points by Beagan put clear space between them.

All-Ireland champions Cork made it four wins from four as they ran out 3-21 to 0-6 winners over Meath in Trim.

The 2017 Intermediate victors were competitive in the opening period, with Megan Thynne, Clare Coffey and Amy Gaffney working hard. Recently-married Orla Cotter hit four points for Cork, while Ashling Thompson and Julia White weighed in with two apiece. Jane Dolan (free) and Maggie Randall were on the mark for the Royals and it was 0-10 to 0-2 at the change of ends.

Cork upped the tempo after the restart and added a goal and three points within five minutes of the resumption. Niamh McCarthy hand-passed the major and she registered a second in similar fashion. Paudie Murray introduced Amy O’Connor and Orla Cronin off the bench and O’Connor responded with 1-4 from play.

Dolan brought her tally to four points from placed balls, while the recently-engaged Aoife Maguire drove over an excellent point as Meath kept battling but the result was never in doubt.

In Group 2, Waterford gave themselves a huge chance of reaching the knockout stages for the first time in their history and ended Limerick’s hopes with an all-the-way 2-11 to 0-15 triumph in a humdinger at Walsh Park.

First-half goals from Beth Carton and Kaiesha Tobin inside the opening quarter gave the hosts a firm foundation early on, particularly with Carton showing customary accuracy from placed balls. Limerick’s own sharpshooter, Niamh Mulcahy was supreme into the wind however and shot six of her 10 points to make it 2-5 to 0-8 at half time.

Declan Nash’s team moved to within one but Niamh Rockett and Carton kept Waterford’s noses in front. Their aspirations were dented when they were reduced to 14 for the third game in a row after Sibéal Harney was shown a second yellow card with eight minutes left.

Limerick threw everything into the closing stages and a Rebecca Delee point in injury time left the minimum between them but Carton had the final say, to bring her own tally to 1-10 and secure a famous win for Declan O’Rourke’s Déise girls.

A draw against Clare will be enough to bag that Quarter-Final spot and the Bannerwomen will be going into the tie on the back of a 4-13 to 0-1 defeat by Kilkenny in Ballyraggett.

Miriam Walsh hit a hat-trick of goals for the League champions and Denise Gaule nailed 1-4 but it was far too easy, as Clare had just a point from Chloe Morey to show for their efforts. Kilkenny go top of the table and will play Galway to decide who takes the prized automatic Semi-Final berth.