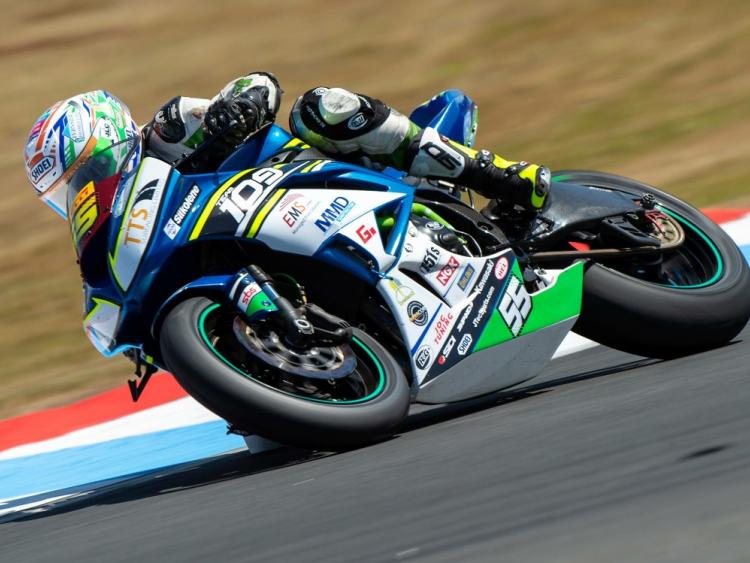 Offaly rider Kevin Keyes is back up to third in the British Super Bike after an up and down weekend in Scotland that ultimately ended in a brilliant ride where, after falling as far back as tenth, he managed to finish on the podium.

The long journey up to Knockhill for the Scottish round of the BSB was what lay ahead of Kevin Keyes last Wednesday night/Thursday morning, before they got to set up their garage and prepare the bike for Friday mornings first practice session.

The first session of the weekend went reasonably well for Keyes, he put in an impressive 30 laps and finished in sixth position.

Friday’s second practice session took place in the early afternoon at 1:45pm. With some minor changes made from his earlier session, he went out on track and held his own until approximately half way through the session he came back to pit lane. The team then made some more minor adjustments and after Keyes rejoined and when he completed hit next full lap he had knocked 0.06 sec off his lap time, and moved up to fourth.

With lap times around him improving, Keyes kept the pace up, and was pushing forward when a minor technical issue arose, with the run of bad luck he has had recently, he could be forgiven for thinking bad luck was continuing, but only for his own quick actions when he noticed something wrong, the small technical issue could have become a major issue.

So although he had to retire, his earlier time was enough for him to hold onto ninth spot on the grid for Sunday’s 22 lap race.

Sunday started off with warm-up for Keyes, and both he and the team decided to try one more change during the session. That change didn’t bring the difference they thought it might, even though he did end the session in eighth position.

So the bike was returned to the previous days settings, ready for race time. At the race start, Keyes got off the line well, and after the first lap, he had moved up to eighth place. A small incident then, with him running wide left, him back in 10th, but he really began to fight back from there and by the end of lap 7 he was up to seventh. Knowing he could ride at the pace of the leading group he kept attacking those in front of him and by the second last lap he was back in a podium position.

Even though he was closing in on the leading two for the last two laps, Keyes settled for third to bring home some valuable points. He now moves back up to third in the championship, just four points off 2nd spot.

Afterwards Kevin commented, “I certainly didn’t leave today’s race easy for myself as I made silly mistakes early in the race which saw me fall back. But I refocused myself, really dug deep, fighting back from 10th to close in the leading group which put me back on the podium. I really cannot thank my Da for all the massive efforts he has put in my whole team and Team#109! And a huge thanks also to Mike from Gearlink Kawasaki for everything he helped me with this weekend. P3, we will take that."

Next up is Brands Hatch GP on the weekend of July 22. As always, if you want to keep up to date with Kevin’s racing follow any of these Facebook pages; Kevin Keyes Racing; Team#109; Kevin Keyes Supporters Club