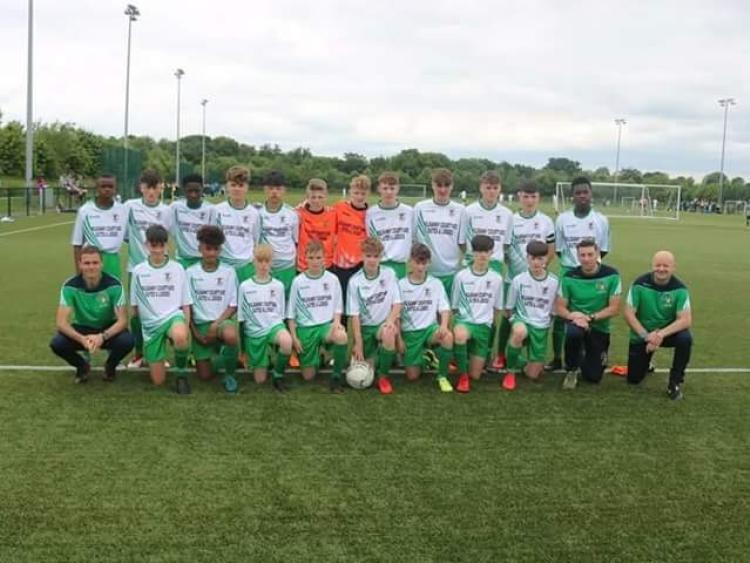 MSL squad at the Kennedy Bowl

The Midlands Soccer League were drawn in Group 4 with North Tipperary, Limerick District and WWEC.

A good start to the competition with the MSL on top for most of the game, but it was seven minutes into the second half before Daniel Ojo made the most of a poor clearance to break the deadlock. It was 2-0 on 49 minutes when Kieran Mitchell Lee shot home from outside the penalty area after making a great run from the right back position. The MSL should have increased their advantage later on but the framework denied them.

The MSL had the better of the early play but two goals in a ten minute spell midway through the first half proved the difference. Despite their best efforts the Limerick defence held firm to take the points.

The MSL were a little slow to start and chances for both teams were few and far between. It was still scoreless with eight minutes left when Cathal Lee scored from close range following a goalmouth scramble. Cathal's second goal six minutes later was a fine drive from just outside the penalty area.The win left the MSL in second place in the group and advanced, like they've done the past couple of years, to the Kennedy Bowl Quarter Final.

A tight game throughout with the MSL having the lion share of possesion. It was a game that had few highlights but great drama at the end as they won with some brilliantly taken penaltys by the players, including keeper Conor Brown, who had a cousin in goal for South Tipperary , who was also outstanding between the posts .

An own goal just before half-time was to decide the game but it was the MSL who created most of the clear chances, restricting Clare to long range efforts. As with a lot of semi-finals there was a great deal of effort but few real chances, so for the third year in a row the MSL were in the Bowl final.

Missing several good chances in the first half when the MSL were on top proved costly. The second half saw Kilkenny get more into the game but at full time it was scoreless. The Kilkenny goal came with just three minutes of extra-time left to play when the ball was forced home in a goalmouth scramble.

Overall a great display by the squad who were a great credit to their clubs and represented the League both on and of the pitch in a great manner.The MSL were team of the day on Thursday.