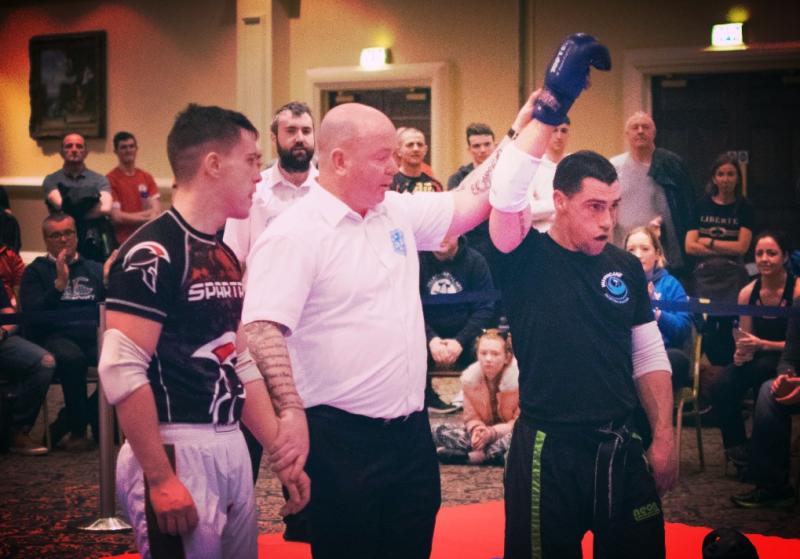 Jay, who is Sensei to the Team Hurricane kickboxing team based in Edenderry, now has nine national titles to his ever growing list of achievements in the martial arts world.

Were he a boxer or a rower, Jay Daniels may well be a household name, but in the close knit sport of kickboxing, he is on first name terms with everyone from the youngest to the oldest from every club in Ireland and indeed beyond these shores.

The Breaffy House Resort was the venue for the White Tiger Challenge, run by Damien Gormley, whose event is now reaching legendary proportions on the international circuit.

Jay’s fight itself was a bit of an anti-climax as such, having won round one convincingly in February against Spartan’s Jordan White with a five point victory, he could not contest the round two event due to illness.

An illness in late April was such that Jay spent a couple of days in hospital but was fully recovered and back to his best for the fight off last weekend.

His opponent again was Jordan White but very early in the fight, Jordan sustained a serious shoulder injury and could not continue. Jay therefore took his national title count to 9 and has now qualified to represent Team Ireland at the upcoming World Association of Kickboxing Organisations (WAKO) European Championships.

Jay and his club wished his fallen opponent Jordan White a speedy recovery.