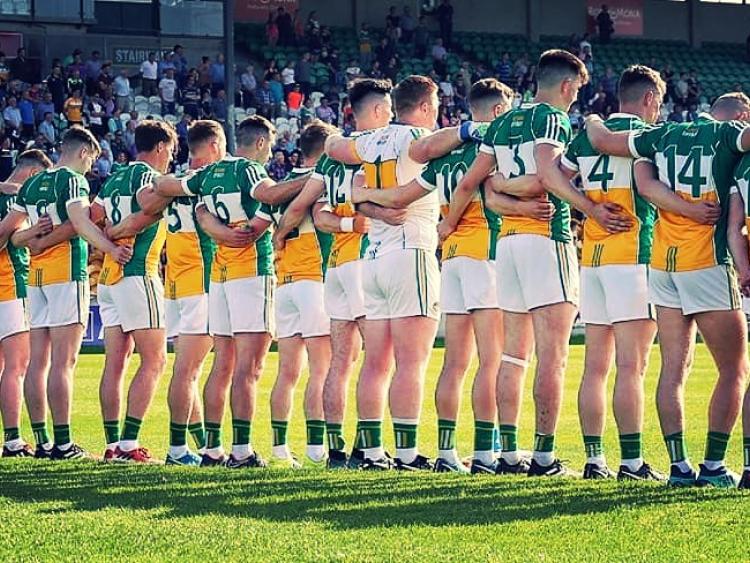 3,400 people turned out in the sun in O'Connor Park to watch Offaly and Clare go to war in a classic Round 2 qualifier clash on Sunday, June 24.

Despite a bright start, Offaly were soon playing second fiddle in midfield with Gary Brennan and Cathal O'Connor mopping up ball for the Banner. That dominance yielded a real 20-minute purple patch for Clare in the first half, and but for wasteful shooting, including two goal efforts hitting the frame of the goal, Clare might have been further in front at the break. Offaly rallied in the second and committed more men to the breakdown, a development that served to produce a ding-dong battle to the end.

Offaly started brightly in this one with Tullamore's Johnny Moloney, named at corner-forward, firing over a point within the opening seconds. Clare hit back with points from wingback Cian O'Dea and half-forward Ciaran Malone putting them into a 0-2 to 0-1 lead after four minutes.

The first turning point came just seconds later when a pinpoint crossfield ball from captain Anton Sullivan found his Rhode clubmate Ruairi McNamee. He turned his man inside out, forced his way inside, and rattled the Clare net. Bernard Allen popped over a free and Johnny Moloney nabbed his second from play soon after as Offaly led 1-3 to 0-2 on 12 minutes.

Offaly had begun by employing the short kick out in order to bypass the huge presence of Gary Brennan and Cathal O'Connor in midfield but midway through the half, Clare pushed up on the Offaly kick outs, and once Mulhall was forced to go long, the Banner's midfield pair won huge ball.

They launched attack after attack and a Jamie Malone goal on 23 minutes was the first product of that dominance. Bernard Allen replied with a free to put Offaly into a two-point lead again at 1-4 to 1-2, but soon Clare took over completely. Clare centre-forward, by far the stand-out player on the pitch, scored three without reply between the 26th and 28th minutes.

When Ciaran and Jamie Malone followed suite with two more points and Malone hit both the post and crossbar in the hunt for goal, the signs looked ominous for Offaly. However, thankfully for the Faithful, those two goal chances came back out off the woodwork and so Clare's lead was just 1-7 to 1-4 after 31 minutes.

Eoin Cleary popped over another free to extend the advantage but then Offaly staged a mini revival late in the half. Johnny Moloney started it with a fine point and from the very next play, Ruairi McNamee was hauled down in the square. The referee pointed to the spot.

Walsh Island goalkeeper Mulhall, known for his penalty blasting exploits at club level, marched forward and without a shred of fuss, buried his effort to the back of the net deep into first half injury time. The teams went in level at the break at 1-8 to 2-5.

Clare started the second half well with a Pearse Lillis point, but now piling more men into the breakdown, Offaly started competing in midfield. Buoyed by very vocal crowd in O'Connor Park, Paul Rouse's men answered the call to score the next three scores. Anton Sullivan got two of them while Ruairi McNamee got the other.

David Tubridy and Malone hit back for Clare and they assumed the lead again, 1-13 to 2-8 after 48 minutes. Gavin Cooney emerged from the bench to stretch Clare's lead but Ruairi McNamee from play and Bernard Allen from a free steadied the Offaly ship and put them back within one, 1-14 to 2-10 after 56 minutes.

The referee's final whistle broke the tension in the cauldron that was O'Connor Park.

Eoin Cleary and Bernard Allen exchanged frees soon after to keep it a one-point game but Clare just kept sticking their necks out as the finish line approached. Gearóid O'Brien pointed on 67 minutes to make it a two-point advantage, while a long ball toward the square was gathered by Johnny Moloney a minute later, and the Tullamore man flashed a goal effort over for a point.

The ever impressive Eoin Cleary proved his worth again late on with an excellent score from play entering the final minute of regulation time, putting Clare into 1-17 to 2-12 lead. With five minutes added on, Bernard Allen did the right thing by pointing a free, but Gearóid O'Brien once again pushed the lead out to two on the 73-minute mark.

Captain Anton Sullivan shook off his man seconds later and fired over a curling shot to set up a grandstand finish with just a point in it. With Offaly on the charge again, a wayward pass saw Clare emerge, and in searing heat and the muscles in their legs burning, Offaly couldn't keep up with Jamie Malone has he streaked clear to tap over the final point.

The referee's final whistle broke the tension in the cauldron that was O'Connor Park. Clare men embraced one another, and Offaly men fell to the turf. They had given every sinew, every fibre of themselves in search of the win, but in the end, it was the Banner held aloft, 1-19 to 2-14.