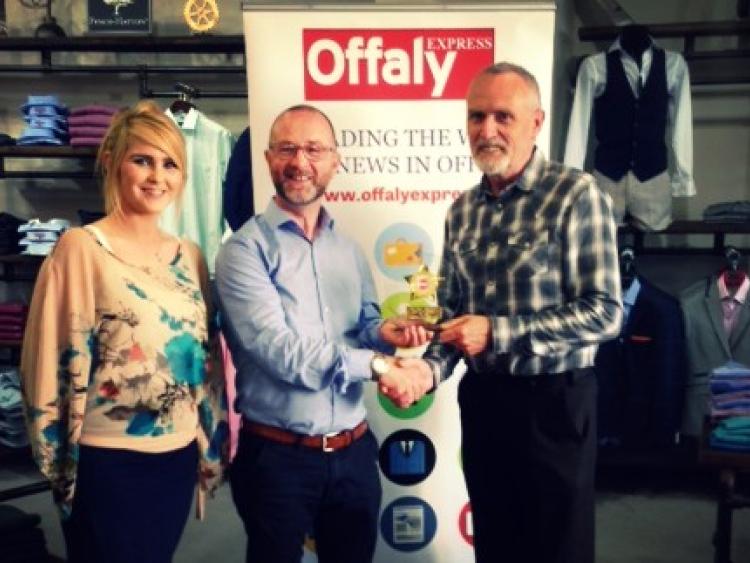 Pat O'Connor has collected the Offaly Sports Star of the Month award for May on behalf of his daughter Niamh who recently scooped the accolade.

Tullamore Harriers athlete Niamh made a late surge to claim the Offaly Express/Guy Clothing Sports Star of the Month award for May 2018 recently.

Niamh gathered 32% of the vote and passed long-time leader Roisin Byrne in the last couple of days of voting to claim the crown. Currently living in New York, Niamh said she was 'thrilled' to win the award and had her father Pat collect it on her behalf from the Offaly Express and title sponsors Guy Clothing, Tullamore.

Niamh made huge strides in May and actually set a new club record for the 5000m in America. Niamh ran 16:34.22 at the IC4A Track and Field Championships in Princeton University's Weaver Field when she finished fourth in the 5000m. Niamh's time becomes the club record, replacing the mark of 16:38.00 set by Pauline Curley when she finished third in the Irish National Senior 5000m in July 2006.

Niamh also won the 10,000m event at the MAAC Outdoor Championships in New York in May, another achievement that sealed her place on our shortlist for May.

Rising Offaly rowing star Roisin Byrne was second in our poll with 28% of the vote, while young hurler Cathal Kiely took third spot on 9%.

Niamh O'Connor will now go forward as the May winner in the ultimate Offaly Sports Star of the Year poll at the end of the year.