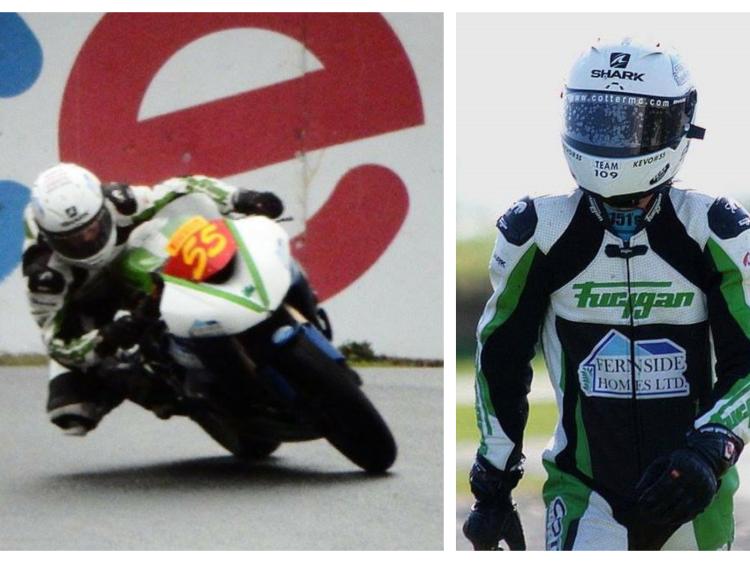 Offaly racer Kevin Keyes proved why he is our reigning Offaly Sports Star of the year over the weekend as he endured huge adversity on the track in the latest round of the BSB Superstock 600 Championship.

The fourth round of the BSB Superstock 600 Championship took place at Donnington Park over the weekend and the Edenderry man ran into a series of problems during practice, qualifying and the race.

Friday’s usual early start for free practice was moved to the last session of the day because of the hectic World Superbike schedule, and a major mechanical fault saw Keyes complete just three laps before he was forced to retire. Back in the garage, further inspection led to the conclusion that a complete engine change was necessary.

Showing his incredible attitude, Kevin, his father and team worked until the early hours of Saturday morning replacing the engine. Less than two laps into qualifying, yet another major mechanical issue forced him to retire again.

It was looking like Kevin's prospect of racing was in the balance but one of his rivals, and reigning WorldSBK champion Jonathan Rea, stepped in to ensure Kevin had the parts to reboot his bike once more. He had to start the race from the back of the grid but was aiming high and remained optimistic.

Keyes grabbed the chance to race and after a brilliant start to the 5pm race from the back of the grid, he was up to an incredible 16th position. Not content with that though and knowing that he could race further up the field, he kept up that pace and by the 7th lap he was up to 11th place, having reduced the gap to 10th, from 3.3 seconds to 1.6, before unbelievably yet another mechanical issue left him unable to continue.

He retired from the race disappointed but his attitude to come back from all setbacks, including an overnight stay in the garage to get the bike ready for qualifiying, with such optimism shows just why the ambitious Offaly racer was voted our Sports Star of the Year for 2017.

Although he drops to 3rd in the standings, the championship leader is still just 24 points ahead of Kevin Keyes.

After the race Kevin said: "This has definitely been the most difficult weekend in my career. I gave it my absolute best in the race going from 26th to 11th in 5 laps."

"I can’t thank my Da enough for everything the man has done this weekend. I really cannot express how grateful I am to have such an amazing person to look up to," he added.

"I also want to say a special thank you to my girlfriend Sarah for being with me all weekend and when the going got tough she kept me together."

Kevin also thanked Jonathan Rea who helped him source parts to ensure his participation in Sunday's race. He also apologised to his sponsors and supporters, but said defiantly, "I’ll be back fighting for the win in round 5."