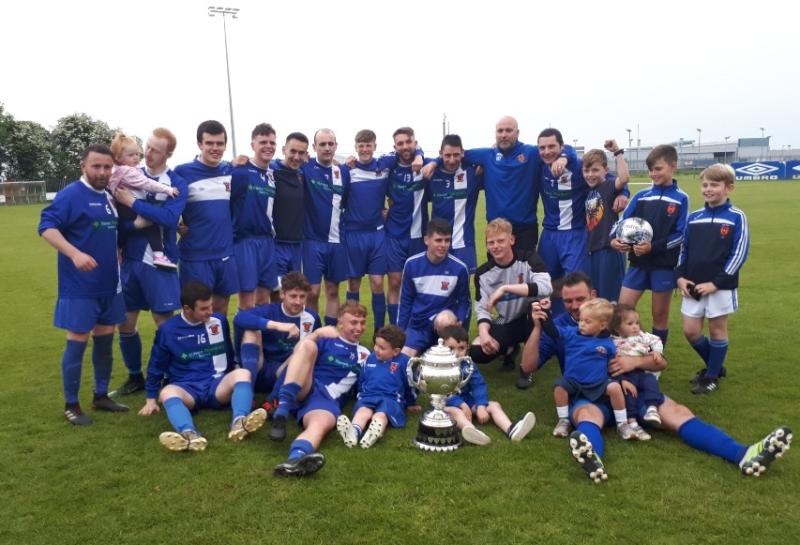 Birr Town ended a 21 year wait to lift the prestigious Combined Counties Cup Final on Saturday holding their nerve on penalties to see off the determined challenge of Rosenallis.

The sides were locked at 1-1 at the end of normal time and, thanks largely to the heroics of Rosenallis 'keeper Paul Friel, it remained at 1-1 after 20 minutes of extra-time. That led to the dreaded penalty shoot-out but Birr held their nerve converting four from four while Rosenallis missed two with Birr's Conor Hogan saving from Darren McEvoy.

It fell to Birr's  Declan Cahill to score the winning kick securing the cup for Birr Town and capping off a tremendous year for the side. Captain and Man of the Match Paul Egan picked up the impressive trophy and the celebrations began in earnest.

Birr made a flying start to the game and their early dominance paid off when they opened the scoring inside the first five minutes. A long clearance from Declan Cahill was flicked on by Nicky Molloy. Johnny Corboy timed his run perfectly and smashed the ball past Paul Friel from close range, giving the goalkeeper no chance.

Birr almost added a second soon after when a corner from Paul Egan was headed just wide by Cahill.

Rosenallis eventually settled into the game and they came close to equalising with ten minutes on the clock. A long ball from the back broke to Ryan Fitzpatrick. His shot was parried by Conor Hogan and Declan Cahill reacted quickest to get the ball away for a corner as Rosenallis' Gary Dowling looked set to score.

Rosenallis were now enjoying a purple patch and Mark Dunne almost got on the scoresheet but once again Declan Cahill was on hand again to make a crucial block. With the upper hand in midfield, Rosenallis pressed forward and were causing problems for the Birr defence.

On the hour mark, they opened up that defence when Gary Dowling put Mark Dowling through on goal but his powerfully struck volley flew just over the bar.

Birr were still causing problems at the other end and David Cox almost made it 2-0 with 32 minutes on the clock. From a long throw, he turned neatly to create space for a shot but he sliced his volley just wide of Paul Friel's left hand post.

With half-time approaching, Rosenallis levelled up the game with a spectacular finish from Gary Dowling. A dangerous corner whipped in by dead ball specialist Donal Lawlor was only half cleared by Birr and it fell to Dowling on the edge of the box. He showed remarkable composure to control the ball before drilling a volley to the top right corner of the net.

In perfect conditions for football on a perfect playing surface in Leah Victoria Park, Rosenallis came out stronger at the start of the second-half and created a couple of half chances but Birr gradually regained control in midfield with their captain Paul Egan very much to the fore.

However while Birr were on top and creating chances, veteran Rosenallis goalkeeper Paul Friel was in truly outstanding form pulling off a string of brilliant saves to keep his side in the game.

With an hour on the clock he got down well, low to his right to palm away a shot from David Cox after a well worked move down the right wing from Birr. He also did well to punch clear a dangerous, curling free from Paul Egan with Declan Cahill bearing down on him.

Midway through the half, Friel was again in the action. David Cox and Barry Harding combined to put Nicky Molloy through on the Birr goal and the centre-forward looked all set to score but Friel got down to his right and got a fingertip on the ball to guide it just past the post.

Birr did manage to get past Friel on one occasion but the crossbar came to the goalkeeper's rescue from Nicky Molloy's powerful header. It was a break the veteran net minder had more than earned.

Apart from a rare Rosenallis foray forward, Birr continued to press. Nicky Molloy curled a free kick just wide before Friel was again back in the action, this time to deny David Cox who was through one on one.

For all their dominance, Birr were almost caught late at the other end. It took blocks last ditch from Declan Cahill and David McEvoy to deny Glen Shaw and Marcus Redmond in a mad scramble in the box before Donagh Cillally's shot was saved by Conor Hogan.

Rosenallis created another chance soon after with a snapshot from Gary Dowling whistling inches wide of the post.

Birr also created one final chance to win the game in normal time from a corner. Three times the ball fell to the feet of Birr players but each time they found a wall in green in front of them before the ball eventually found its way to Paul Friel.

The final whistle soon after bringing the final to extra-time. The first period was all Birr but players were begining to tire and chances were at a premium. Birr had one shout for a penalty when Nicky Molloy went down under a tackle from Adam MCDermott but referee Pat Geoghan waved play on.

Birr continued to press in the second period of extra-time and they created one great chance but Paul Friel somehow got a fingertip to a volley from Johnny Corboy that looked destined to fly into the top corner.

With two minutes remaining, Rosenallis were reduced to 10 men when Glen Shaw was shown a red card following an off the ball incident spotted by the referee. It had little impact as the game went to a penalty shoot-out.

Birr went first with Johnny Corboy finishing low to the right. Donagh Cillally answered for Rosenallis putting the ball perfectly into the bottom left corner. Nicky Molloy made it 2-1 for Birr but Rosenallis' Rian Dempsey saw his penalty saved by Conor Hogan. Darren McEvoy made it 3-1 for Birr in the shoot-out although Paul Friel almost saved it. The writing was on the wall for Rosenallis when Adam McDermott's penalty went just the wrong side of the post and the tie was decided when Birr's centre back Declan Cahill calmly slotted home the winning penalty.