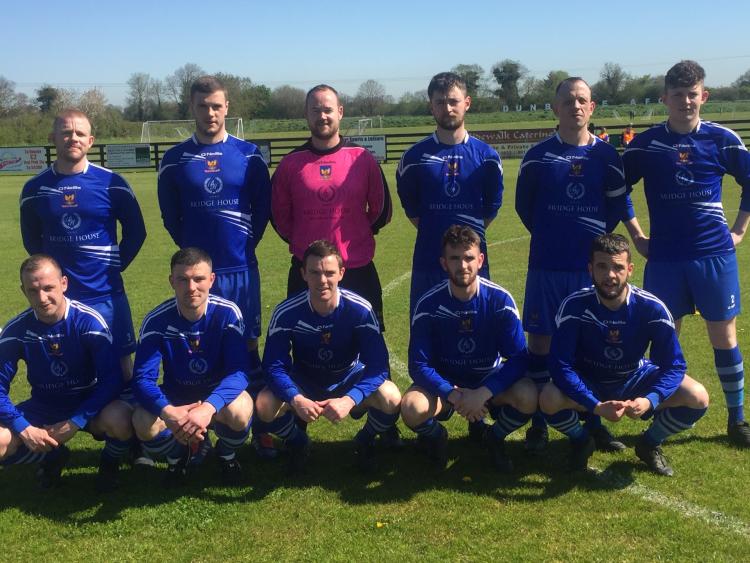 Tullamore on promotion trail after hard-fought away win

In the glorious Meath sunshine Tullamore moved back into the promotion race last Sunday with a hard earned victory over Dunboyne AFC.

Knowing that they could not afford to slip up they began in attacking mode with Shane Dolan picking out Brian Francis
but Chris Sylvestre got across to cut out the danger and Dolan was again in the thick of the action when his deep cross found Stephen Francis at the far post but his effort flew into the side netting.

Dunboyne dusted themselves down and Niall Connellan threatened when his shot was blocked by Rory Condron and he again went close when his 25 yard effort was well held by Alan O’Connell. As Tullamore hit back a surging run by Shane
Dolan saw him pick out Brian Francis but Shane Weston got back to cut out the danger and then an Anthony Kavanagh corner was headed narrowly over by Shane Dowling.

They again went close when Rory Condron played a great ball out to Shane Dolan on the left who slipped it inside to Shane Dowling, but his shot was well saved by Justin O’Neill in the home goal. With 27 minutes gone the visitors had a real scare when the dangerous Niall Connellan burst through the middle and fired inches outside the left post.

Tullamore tightened their grip on the game with Kevin Williamson playing a fine ball through to Brian Francis but O’Neill was quickly off his line to clear but Anthony Kavanagh and Stephen Francis then combined to create an opening for Enda Carroll who blazed wide.

Excellent play by Carroll on the right saw him fire in a searching cross that Jay Duane did well to head to safety but, with 43 minutes on the clock, they hit the front. Kevin Williamson picked out Stephen Francis and his low diagonal ball was swept home by Shane Dolan from close range.

The home side immediately hit back with Niall Connellan finding Brian Martin on the right and his cross shot flew inches outside the far post. As the game moved into injury time Tullamore nearly increased their advantage when Anthony
Kavanagh and Brian Francis combined to send Shane Dolan clear, but he was denied by a wonderful last ditch tackle by Gary McCrossan as the referee brought the first half to a conclusion with the visitors still one goal to the good.

On the resumption, Dunboyne nearly pressed the self-destruct button when Chris Sylvestre played the ball back to his keeper and the ever alert Brian Francis got a block on his attempted clearance, but Justin O’Neill managed to recover the situation.

Stuart Carroll had his header well saved by O’Neill but, with both teams struggling to create chances, manager Tony O’Sullivan introduced Gio Russo and Kevin Minnock on 65 and 70 minutes respectively and their arrival seemed to galvanise Tullamore into action.

Kevin Williamson played a great ball through to Russo but he fired past the left post while, at the other end, Rory Condron did well to cut out the danger as David Beattie broke into the area. With 85 minutes gone they increased their lead when fine play by Gio Russo on the left saw him pick out Brian Francis and his low cross was fired home by Kevin Minnock at the far post.

Dunboyne nearly reduced the arrears when Gary McCrossan got on the end of a free kick and headed the ball back across goal but Shane O’Connell was on hand to knock it to safety. The visitors tried to close the game down but with minutes remaining
the home side opened their account when, following a goalmouth scramble, Eric Ryan fired the ball into the net from close range.

Tullamore nearly had the last word when Kevin Minnock broke clear on the right but, in attempting to lob the keeper, he lifted his effort over the bar as the referee brought the curtain down on a very entertaining game.

With Tullamore only 2 points behind the third promotion spot and with a game in hand they have every reason to approach their final three games with renewed confidence.

Despite having had a difficult last few months they have hung on tenaciously to their league position and are now well placed to achieve their ambitions. With crucial home games against UCD this evening, Wednesday, and Home Farm on Sunday they stand on the cusp of a fourth promotion in a row.

In what was an impressive team performance there were excellent contributions from Rory Condron, Stephen Francis and Gio Russo, but the man of the match award went to Tullamore’s midfield dynamo, Enda Carroll.