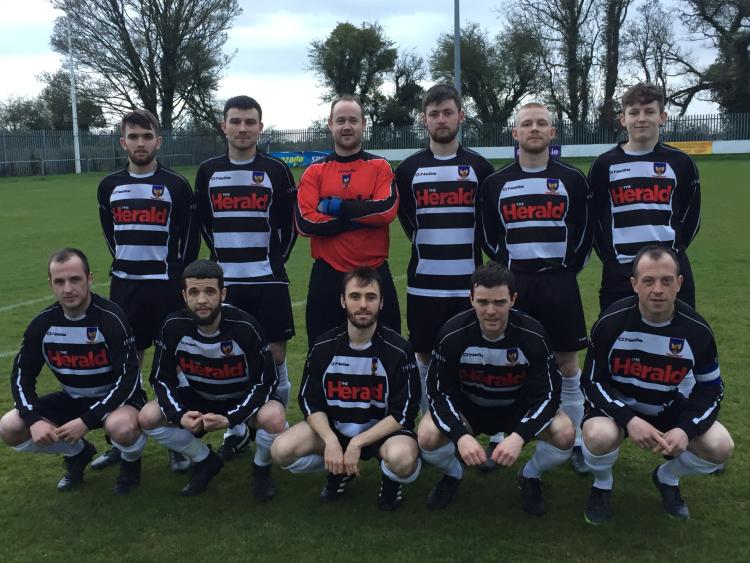 Despite enjoying the lion’s share of possession Tullamore’s frailties in front of goal were once again their undoing in this top of the table Leinster Senior League Division 1 clash in Leah Victoria Park last Wednesday.

In contrast, Liffey Wanderers demonstrated the fine art of finishing to devastating effect as their ace striker Lee Roche converted the only two clear-cut opportunities that they created in the game.

Straight from the kick-off the home side went on the attack with Stephen Francis picking out Shane Dolan but Dylan Roche got
across to cut out the danger and then Enda Carroll played in Brian Francis but the keeper was quickly off his line to clear.

Liffey threatened when Aidan Roche sent Lee Roche clear but Rory Condron was alive to the danger and, with 20 minutes gone, Tullamore nearly made the breakthrough. Lovely play between Anthony Kavanagh and Stephen Francis resulted in Andy Quinn being taken down and, from the resultant free kick, Kavanagh had his goal bound effort blocked on the line by Glen O’Connor.

Five minutes later the visitors hit the front when Gary Young pounced on a weak clearance and threaded the ball through to Lee Roche who drilled it into the bottom right corner of the net. Tullamore again went close when Anthony Kavanagh’s corner was headed narrowly over by Enda Carroll and then great play by Andy Quinn saw him pick out Carroll in the area, but his
shot flew inches outside the right post.

As they continued to press a fine run by Shane Dolan saw him fire narrowly wide as the referee brought the first half to a conclusion with Liffey still one goal to the good.

On the resumption Tullamore went in search of an equaliser with Shane Dolan, Enda Carroll and Anthony Kavanagh combining to create an opening for Brian Francis, but his effort flew outside the right post. With Shane Dowling coming on they kept up the pressure as Shane O’Connell picked out Stephen Francis who sent in a curling cross that Philip O’Connor did well to punch to safety and O’Connor was again called into action when he managed to tip Kevin Williamson’s wicked cross shot over the bar.

With Stuart Carroll and Rory Condron holding firm at the heart of the Tullamore defence the visitors found themselves fighting a rearguard action and they had another escape when Shane Dowling got on the end of Kevin Williamson’s free kick but he failed to get his shot on target.

With five minutes remaining Tullamore were made to pay for their profligacy when Dylan Whelan played a great crossfield ball to Lee Roche who brilliantly took it in his stride before steering it into the bottom right corner. The home side never gave up on the game and were unlucky not to get a goal back in the dying minutes when Kevin Williamson picked out Shane Dowling in the inside right channel, but his effort flew inches outside the far post as Liffey laid claim to all three points.

This defeat represents a major blow to Tullamore’s promotion chances but with all the top teams taking points from one another they are still well in the race. They have a difficult away fixture this Wednesday against Swords Celtic and, with five games to go, they will be hoping that there are still a few more twists to this exciting season.

In what was a fine overall performance there were excellent contributions from Rory Condron, Stephen Francis and Kevin Williamson, but the man of the match award went to their outstanding central defender, Stuart Carroll.