A hard fought victory for the town 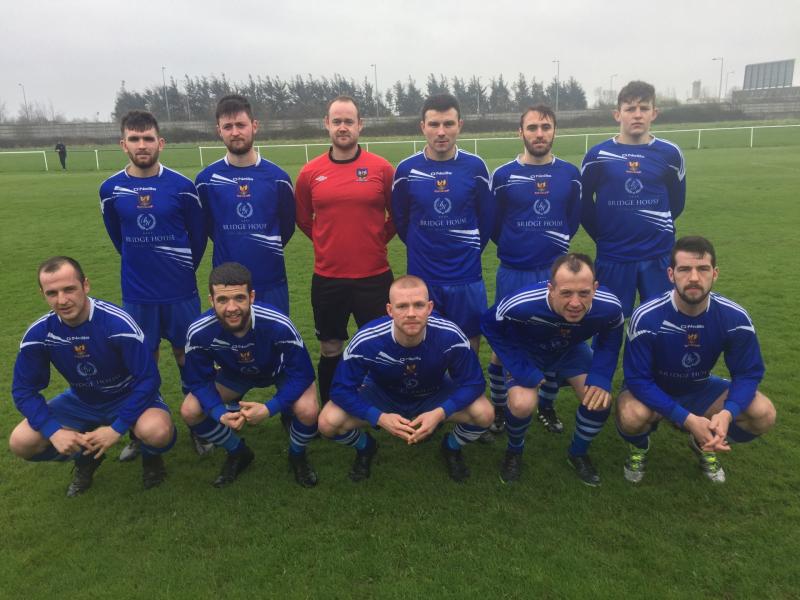 Tullamore fired themselves back into the title race last Sunday when they travelled to Dublin and came away with all three points against a tough-tackling Dublin Bus side.

Having lost ground in recent weeks they were acutely aware of the importance of this fixture and they rose to the challenge with a display of grit and determination that saw them safely over the line.

They began brightly with Stephen Francis picking out Shane Dolan who drove his effort narrowly outside the post while, at the other end, Gareth Kenna fired in a shot from 25 yards that brought a fine save from Alan O’Connell down low to his left.

With 10 minutes gone Tullamore hit the front when Stephen Francis threaded the ball through to Brian Francis and, when his drive came crashing back off the left upright, Anthony Kavanagh was on hand to steer the rebound into the net.

With the home side still reeling they nearly increased their lead when, following a free kick, the ball broke back to Brian Gill but his effort was too high.

As Dublin Bus went in search of an equaliser Liam Dwyer sent a fine crossfield ball to Anthony Byrne but he was denied by a
great relieving tackle from Andy Quinn and then Shane O’Connell did well to knock the ball behind as Doyle broke clear on the right.

With 40 minutes gone Tullamore should have added to their lead when Brian Francis picked the ball up from a quick throw-in and crossed it to Shane Dolan but, with the goal at his mercy, he delayed his shot and Connor Little got down to smother his effort.

As they continued to press Anthony Kavanagh won a corner on the right and when Rory Condron swung the ball in Stuart Carroll headed narrowly over and then a fine run on the right by Kavanagh just failed to pick out a teammate as the referee brought the first half to a conclusion with Tullamore holding on to their one goal advantage.

The second half began in a flurry of action as Anthony Kavanagh broke clear on the right and fired over and then Ciaran Bissett played in Gareth Kenna, but Stephen Francis got back to cut out the danger.

With an hour gone Tullamore again went perilously close when Enda Carroll picked out Kavanagh in the inside right channel but he was denied by a superb double save from Connor Little in the home goal. With Shane Dowling coming on they continued to press and he nearly had an immediate impact when he latched onto a weak clearance and drove his effort inches outside the right post.

Dublin Bus began to move up through the gears with Stuart Carroll doing well to knock Gareth Kenna’s dangerous cross to safety but, with 75 minutes on the clock, they struck for the equaliser. Kenna and Yuta Sasaki combined to pick out Ciaran Quinn and his well struck shot flew inside Alan O’Connell’s near post to level the game.

Tullamore dusted themselves down and went back on the attack with Little doing well to gather Rory Condron’s low cross and
then good play between Anthony Kavanagh and Shane Dowling created an opening for Shane Dolan but he fired over.

With five minutes remaining they regained the lead when Brian Francis broke clear on the left and picked out Shane Dowling at the back post and he fired home from close range to the delight of his teammates and the travelling support.

With Ballymun losing to Glenville on Sunday this win really sets up Tullamore’s home game against Liffey Wanderers this evening. A victory would see them join Swords Celtic at the top of the table with a game in hand as they move into the business end of the season.

In what was an outstanding team performance there were excellent contributions from Rory Condron, Stuart Carroll, Brian Francis and Anthony Kavanagh, but the man of the match award went to Tullamore’s captain fantastic, Stephen Francis.

Tullamore Town are at home to Liffey Wanderers this evening, Wednesday, April 18, kick- off at 8pm in Leah Victoria Park.