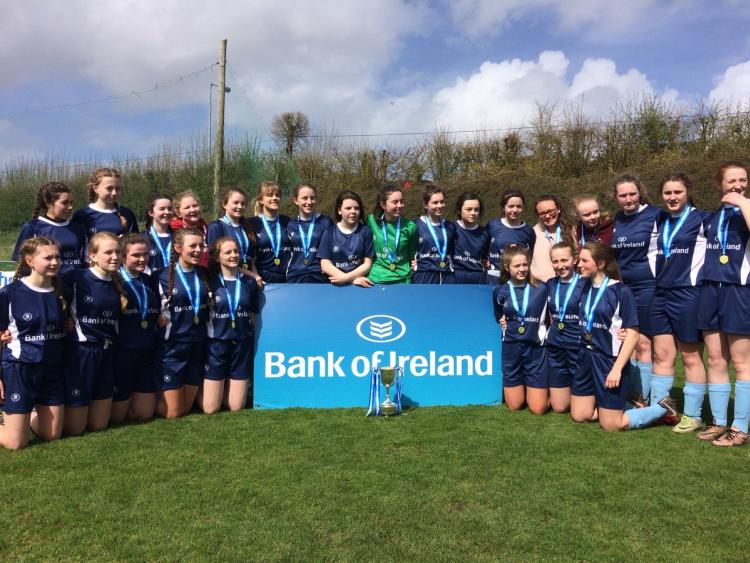 The Newport outfit St. Mary’s SS were the surprise package in 2017 but it was Offaly’s Killina that stole the show this season with a tremendous outing in their cup campaign.

In a breezy start to proceedings it was the Tullamore girls that took advantage of an increasing swirl in the Birr venue but netminder Emma Wright was alert to the dangers of Becky Watkins and Megan Daly to keep the deadlock in the early exchanges.

However midway through the first thirty, it was Emma Dolan’s stunner that swept past Wright to open Killina’s account.

The Newport side were close to coming up with an equaliser just before the interval as Abbey Lenihan made a darting run down the right flank but Ciara Glackin was equal to the challenge and got down well to save bravely.

Chelsea King was introduced in the second half for St. Mary’s and her first touch nearly resulted in a goal as her strike from the left wing just sprayed past the far post.  King was the target for much of the Newport attack but Killina’s defence stood strong to keep her and Emma Kett at bay.

A remarkable achievement for the Offaly School as it’s their first ever National accolade in any sporting discipline, an historic moment for management duo Graham O’Connor and Philip Austen. No doubt this duo will be looking to replicate their success stories in 2019.

Gary Seery, FAI Development Officer for Offaly was on hand to announce the Player of the Match. While Emma Wright (St. Mary’s SS) and Ciara Clackin (Killina PSS) both impressed between the sticks as well as the attacking prowess of Becky Watkins (Killina PSS), it was midfielder and Killina Captain Ava Dolan that was named Bank of Ireland Player of the Match following her energetic performance.