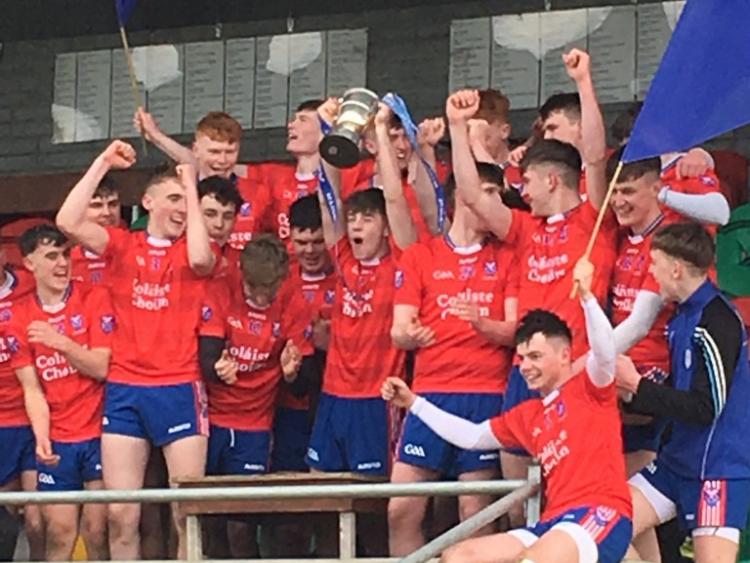 Tullamore school Colaiste Choilm had to dig deep on Saturday but they came through impressively in extra-time to claim an historic All Ireland Senior B Hurling title.

The Tullamore side took control in extra-time and opened up a two point lead half way through the added periods.

The lead remained at a nervous two points entering the final minutes but any doubt over the result was removed as they scored the last two points to seal the incredible victory with Brian Duignan hitting the final score.

It was the perfect end to an incredible year for the side which is backboned by players from a number of clubs in the environs of Tullamore. The team is managed by teachers Colm Cassidy and Vanessa O’Brien and they are assisted by Michael Duignan, Pat Cleary and Dónie Beatty.

There was little to chose between the sides in the opening exchanges but the Ulster side put in a meaningful spurt before half-time and went to the break with the comfort of a 0-7 to 0-3 lead having played with the wind.

Colaiste Choilm narrowed the gap to two early in the second-half and they managed to draw level at 0-8 apiece entering the final ten minutes with Cathal O'Meara, Mark Dillon and the deadly accurate Brian Duignan all on target.

The sides were level again at 0-9 apiece but Maghera looked to have stolen a march as they got two points ahead entering the final minutes.

Colaiste Choilm dug deep and forced extra-time and then they pulled away to win in the added periods.