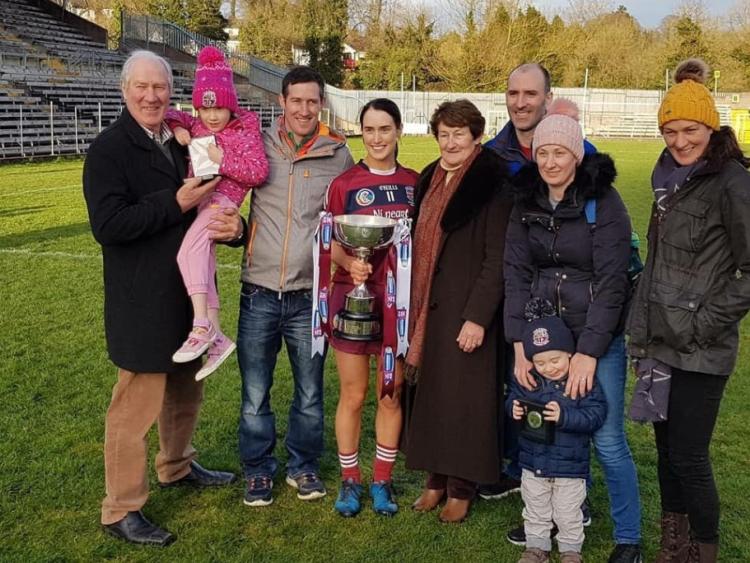 Tina Hannon with her family after the final

Offaly's own Tina Hannon was named the Player of the Game following the All Ireland Senior Club Camogie Final at the weekend after a superb individual performance.

Slaughtneil overcame Sarsfields in the final to reclaim the All Ireland title and Tina scored an impressive 1-8 in the decider.

Tina has had a memorable two years on the camogie fields and last Sunday’s victory was the icing on the cake. Tina’s club career in Offaly ended in October 2016 when her home club Naomh Brid won the Offaly Junior Camogie Championship. Tina was joint-captain on the day.

Tina has won several awards including a back to back junior All-Ireland and Intermediate All-Ireland titles with Offaly in 2009 and 2010, she also won Offaly player of the year in 2015. Last Summer she juggled intercounty camogie with Offaly and club duties in Northern Ireland. In the Leinster quarter-finals, Hannon drove from the top of the country to the bottom to play Wexford where she came on late in the second half and scored three points to win the game.

Tina has won several awards including a back to back junior All-Ireland and Intermediate All-Ireland titles with Offaly in 2009 and 2010. She also won Offaly Player of the Year in 2015. Last summer she juggled inter-county camogie with Offaly and club duties in Northern Ireland. In the Leinster quarter-finals, Hannon drove from the top of the country to the bottom to play Wexford where she came on late in the second half and scored three points to win the game. 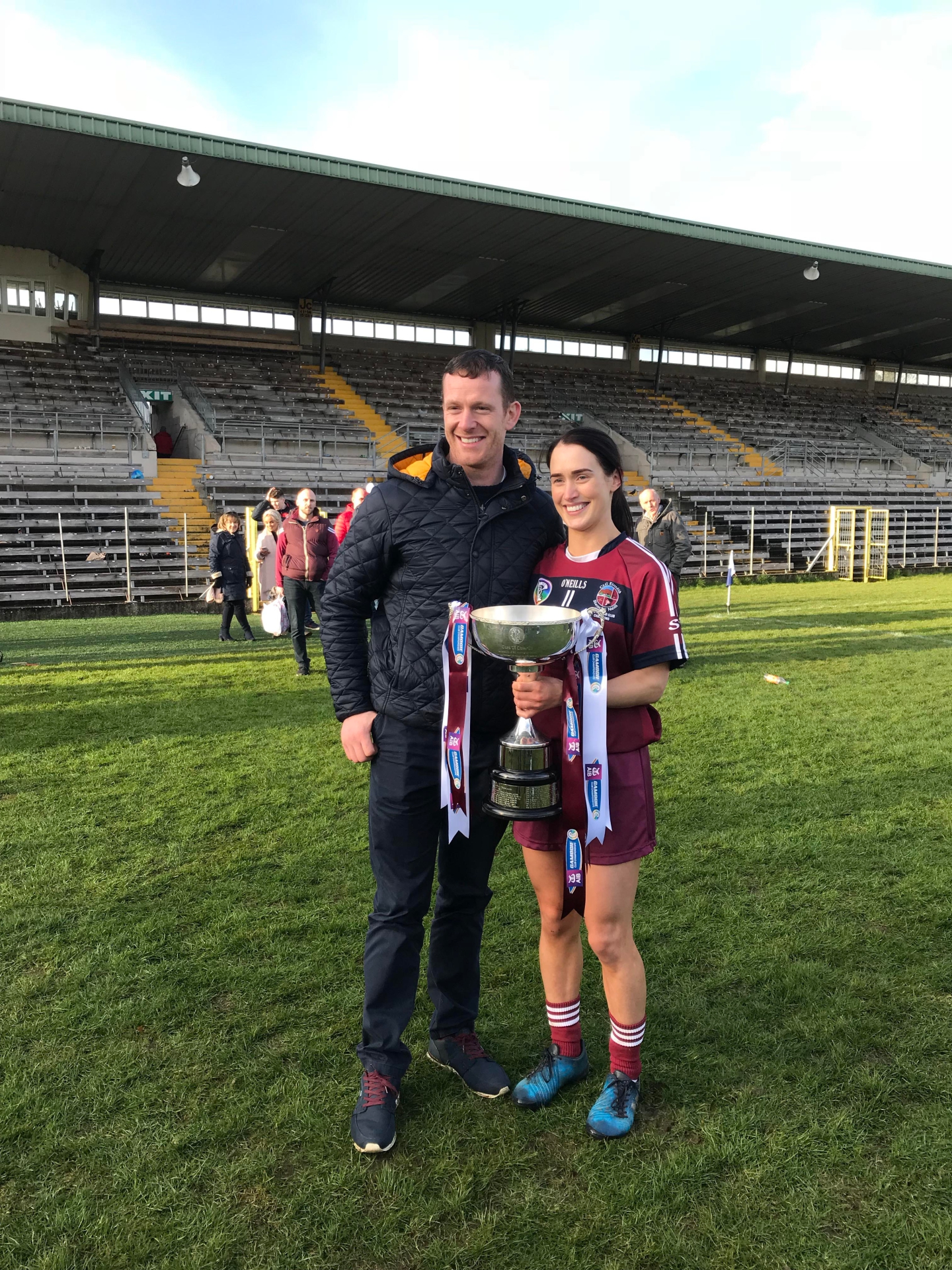 Six months later, Tina was lining out for the 2016 All-Ireland club champions Slaughtneil, a small club with a big story in Derry. In the following months, Tina would become an integral part of team both on and off the field as she would begin to build a house with boyfriend and famous footballer Patsy Bradley. Bradley and Hannon met on Fraser Island on the east coast of Australia six years ago and the rest is history. With a new job in Letterkenny and foundations laid, Hannon opted for the opportunity of a lifetime to line out for Slaughtneil.

Tina's family and a number of her Offaly county team-mates made the trip to support her on the day and they were on the pitch to celebrate with her after the game. 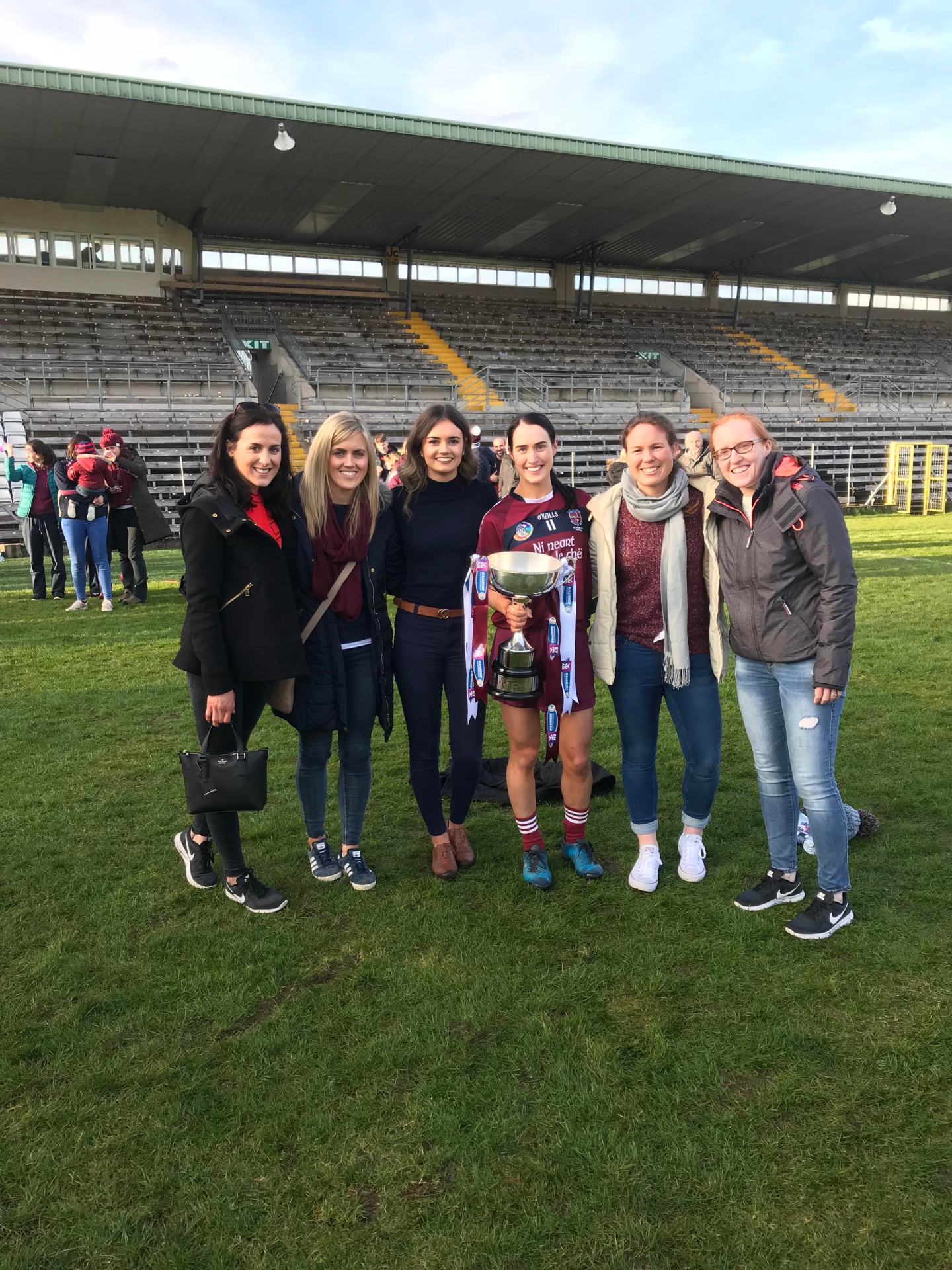 Speaking after the game, Tina commented,  “it has been a dream really. It was tough game all the way through even before this match we had a really tough semi-final and we knew that playing 80 minutes that day that it would only stand to us today and in fairness to Sarsfields they got off to a better start. They were quite strong and we were probably lucky enough to go in with a draw at half time. And I suppose when you go in with a draw at half time it’s even-stevens again for the second half. We’re just delighted we came out in front. We pushed on, we got to where we wanted and we are back to back all-Ireland champions.”

Talking about her former club Naomh Brid Tina had nothing but praise for her Offaly side.

“I mean on days like this you think back to where it all started with my own native club Ballyskenach and then we amalgamated with Coolderry to be Naomh Brid. It was a real journey and I suppose I left the club last year on a high when we won the Junior Championship and we competed well at Kilmacud. Even when I was leaving last year, they knew the circumstance and they have been nothing but  a massive support to me. It’s days like this when I think back to wearing the black and green jerseys and I will never forget it.”

Speaking about winning the Player of the match award, Tina played down her role in the game.

"On days like this you don’t think of individual performances, it’s a team sport, I suppose it’s different from playing an individual sport and you win together and lose together. On our jerseys it is 'Ní neart go gur le chéile' which means 'There's no strength without unity'. We carry that through when we come onto the pitch. We fight for each other for every last minute it’s a testament that we usually finish strong in a match and I am delighted once again we put in the performance to finish strong again today.”