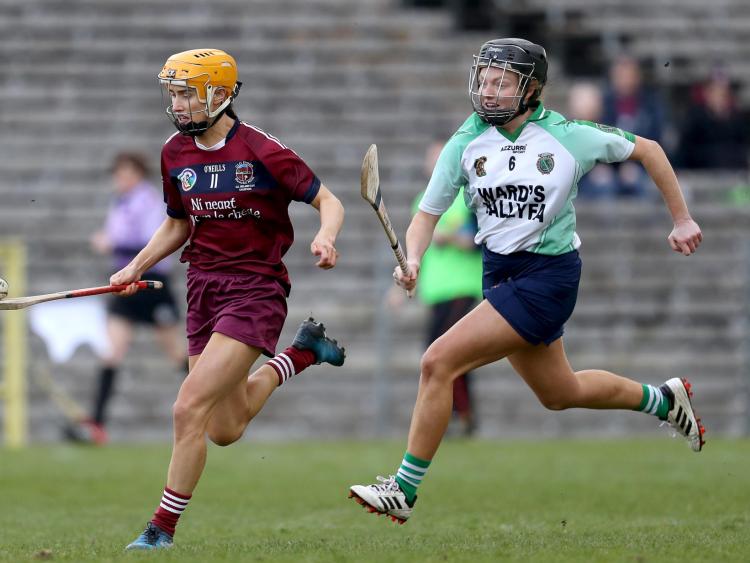 Tina Hannon in action for Slaughtneil

Offaly's Tina Hannon was on fire today as Slaughtneil maintained their position as the premier Club team in the land.

The former Naomh Brid player, who has won two All Ireland titles with Offaly, scored 1-7 of the Derry side's total and was a key part of a commanding second half performance which ensured that Slaughtneil etained their AIB All-Ireland Senior Championship title at St Tiernach’s Park.

In the process, they continued the dreadful run of Galway representatives in the decider, with Sarsfields’ second consecutive loss the sixth in a row for the western champions at the final hurdle.

It took Slaughtneil a while to kick into gear and they would have been delighted to go in at the break level on 1-5 apiece, given that Sarsfields were more threatening.

The champions hit the front in the 42nd minute, when the excellent Tina Hannon pointed, and this was the first of three events in as many minutes that turned the game.

Sarsfields talisman, Niamh McGrath lost her ongoing battle with a leg injury that clearly hampered her contribution immediately after and was withdrawn. This was a monumental blow.

And then, right on the three-quarter mark, Louise Dougan rifled an unstoppable shot to the roof of the Sarsfields net from a penalty, after the brilliant Shannon Graham was hauled down by Erica Leslie.

By now, Slaughtneil were managing to impose themselves physically and when Hannon gave them a four-point advantage, the Derry girls were able to protect the lead by dropping deep and denying the opposition danger women the space they needed to thrive.

Slaughtneil goalie, Jolene Bradley was called into action from the very first attack, when Maria Cooney caught a McGrath free and sent in a powerful shot that the Slaughtneil goalkeeper was equal to.

It was a lightening quick start to proceedings, and the sides were level on two points apiece when they then exchanged goals.

Sinéad Cannon applied the finishing touch to Sarsfields’ major in the 10th minute but while the finish was cool, the score was all about Siobhán McGrath, as the 17-year-old beat three defenders and drew a fourth before passing to her teammate, who made no mistake.

Hannon provided the perfect riposte though. A two-time All-Ireland winner with Offaly, the centre-forward, who finished with a game-high tally of 1-7, drove through the middle and though her initial shot was saved by Yvonne Lyons, she was on hand to knock home the rebound.

Hannon converted a couple of more frees to bookend scores from Niamh and Orlaith McGrath and then equalised after Siobhán McGrath slotted her second free, her latter effort coming after a smart stop by Lyons from Josie McMullan.

That sent them in level at the change of ends and it remained extremely competitive as the rain made conditions more difficult early after the restart.

Cannon and Mellon, and Siobhán McGrath and Hannon inched the scoreboard forward but still they could not be separated.

That was when the key moments occured.

By now, Tara Kenny had moved to mark Tina Hannon but Dougan stood out in reprising the deep-lying role that proved so effective 12 months ago, while Graham moved into top gear with a rampaging second half display.

In defence, Bróna Ní Chaiside in particular was a considerable presence at full-back and once Slaughtneil had established primacy, they never looked like ceding it.

Rachel Murray did launch a brilliant point on the run and Éilís Ni Chaiside made a good stop from an attempt at goal by Cooney from a free in injury time but Slaughtneil were not going to leave this slip and the Bill & Agnes Carroll Cup will be spending another year with the Robert Emmets’ contingent.