Tullamore Town back to winning ways with cup victory

Their form had dipped recently 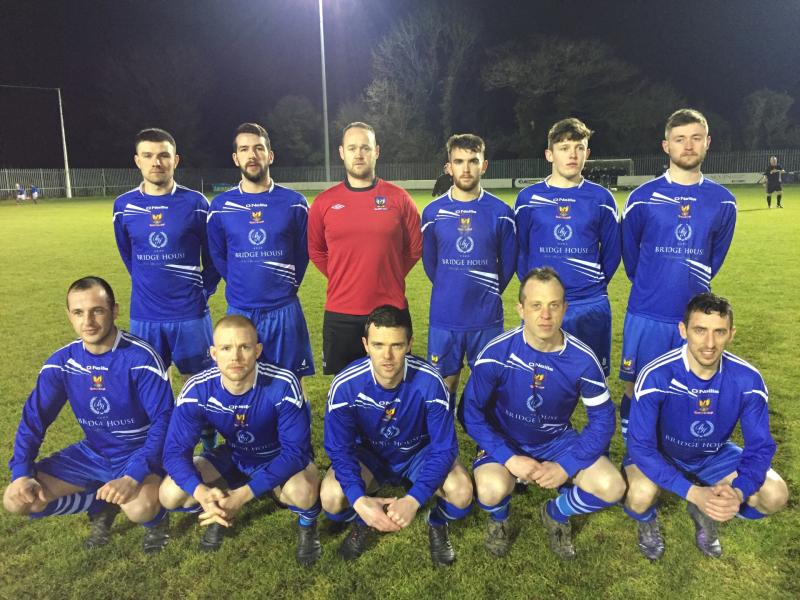 Tullamore Town back to winning ways with cup victory

Tullamore put their recent run of bad results behind them as they produced a tremendous battling performance against top Dublin side Bangor Celtic in Leah Victoria Park last Wednesday to book their place in the last four of the Charlie Cahill Cup.

This was a particularly satisfying win against a team who are playing in a higher division and Tullamore have been rewarded with a home tie against cup favourites Crumlin United in the semi-final.

The early stages of the game looked ominous for Tullamore as Bangor quickly gained control of midfield and laid siege to the home goal with Gary Deans breaking clear on the right and Kevin Williamson doing well to hook his dangerous cross to safety.

Tullamore went close when Brian Gill got his head to Williamson’s in-swinging corner but it was cleared from under his own crossbar by Paul Scally while, at the other end, Alan O’Connell did brilliantly to tip Laurence Dunne’s effort around the post when he looked certain to score.

Despite coming under increasing pressure the Town defence refused to give an inch and with half an hour gone they jumped into the lead when Stuart Carroll rose above the Bangor defence to power Kevin Williamson’s free kick into the roof of the net.

The visitors immediately hit back with Alan O’Connell again doing well to keep out Arron Coleman’s drive down low to his right. A lovely flowing move involving Anthony Kavanagh, Brian Francis and Stephen Francis saw them pick out Shane Dolan on the left but Adriano Varinak in the Bangor goal was equal to his effort.

As Tullamore began to tighten their grip on the game Brian Francis just failed to get on the end of Williamson’s searching free kick as the referee brought the first half to a conclusion with the home side one goal to the good.

Upon the restart Tullamore came out with all guns blazing as Shane Dolan and Brian Francis combined to create an opportunity for Anthony Kavanagh but his effort was charged down. Kevin Minnock picked out Shane O’Connell on the right and his cut back was fired narrowly over by Kevin Williamson and Minnock was again in the thick of the action when
he played a great cross-field pass to Shane Dolan, but the ball struck his hand as he attempted to control it.

With an hour gone they should have increased their lead when lovely football by Dolan saw him play the ball inside to Kavanagh but, with Minnock free to his right, he over hit his pass and the opportunity was lost. The home side were now in
complete control as Minnock’s cross was knocked behind and, from the resultant corner, Rory Condron’s effort was blocked on the line.

They again went agonisingly close when Williamson’s free kick eluded everyone and struck the left upright as Tullamore looked to kill the game off. Bangor always posed a threat and they nearly equalised when Andrew Dunne’s free kick just missed out Cian Fadden and Alan O’Connell again came to his sides rescue when he superbly tipped Michael Fox’s close range header around the post.

As the visitors continued to press Fox was denied by a great last ditch tackle from Stuart Carroll while, at the other end, Gio Russo played a lovely ball through to Brian Francis but he was crowded out. With minutes remaining the home side nearly wrapped it up when Minnock, Kavanagh and Russo combined to pick out Brian Francis but he fired over as the referee brought the curtain down on a nail biting cup tie.

Before the game a minutes silence was observed for former chairman and player Sean Hogan who died during the week. This result was a real tonic for Tullamore as they look to get their title challenge back on track when they play host to league leaders Ballymun United this evening, Wednesday, in what promises to be one of the games of the season.

In what was an exhilarating game there were excellent contributions from Brian Gill, Stuart Carroll and Stephen Francis, but the man of the match award went to Tullamore’s outstanding goalkeeper, Alan O’Connell.

Tullamore Town are at home to Ballymun United in the LSL this Wednesday, February 28, in Leah Victoria Park, kick-off 8.00pm.