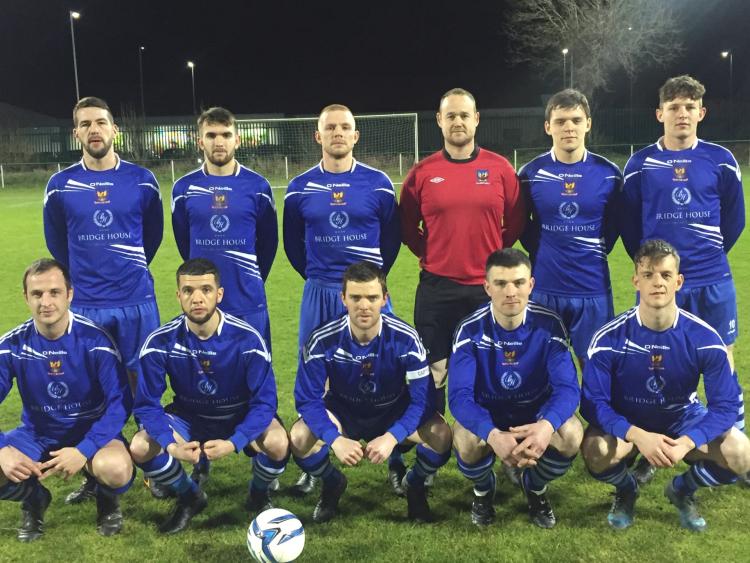 Tullamore fall to just third defeat of the season

League leaders Tullamore travelled to Balbriggan last Friday where they fell to only their third defeat of the season against local side Glebe North, and were dominated for long periods by a powerful and well organised home side that will have given manager Tony O’Sullivan serious pause for thought.

Deprived through suspension of their talisman and captain Stephen Francis, Tullamore appeared rudderless in midfield and their normally quicksilver attacking players struggled to make any impression on the tough and uncompromising home defence.

Glebe were straight out of the blocks with Craig Penlong forcing Brian Norris to knock the ball behind and Chris Pullis heading
wide from the resultant corner. Dan Doherty tried his luck from distance but Alan O’Connell was equal to his effort and then Penlong pounced on a loose clearance with Kevin Willaimson and Brian Norris doing well to get back to retrieve the situation.

Lovely play between Brian Francis and Shane Dolan created an opening for Francis but Ciaran O’Connor got across to clear and he again threatened when he got on the end of a great through ball from Brian Gill, but this time Jay Rankin came to his side’s rescue.

As the game continued to ebb and flow Sean O’Connor broke clear on the right but he was denied by a fine relieving tackle from Brian Norris but, with 25 minutes gone, Tullamore nearly jumped into the lead. Enda Carroll picked out Robert Bracken on the left and his low cross was knocked behind by Ciaran O’Connor and from the corner Carroll headed narrowly wide.

They were now enjoying the better of the exchanges and they again went close when Brian Francis got on the end of Brian Gill’s long free kick but he just failed to make contact as he clashed with the Glebe keeper. With 35 minutes on the clock the home side hit the front when Dan Doherty sent Chris Pullis clear on the left and his low cross was swept home by Sean O’Connor from close range.

Glebe now took control of the game as Penlong picked out O’Connor but Shane O’Connell cut out the danger and then Stuart Carroll brilliantly blocked O’Connor’s goal-bound effort. As they continued to press Penlong sent O’Connor through but Alan O’Connell was quickly off his line to clear.

Tullamore weathered the storm and went back on the offensive with Robert Bracken cutting in from the left only for his shot to be deflected outside the post and Anthony Kavanagh then went close when he fired narrowly over from 25 yards as half time arrived with the home side one goal to the good.

Glebe North went back on the offensive following the restart with Chris Pullis and Dan Doherty combining to create an opening for Craig Penlong, but Alan O’Connell saved well. He was again called into action when he had to deal with Aidan Bissell’s dangerous left wing cross and they went perilously close when Penlong’s low cross just missed out the late arriving Penlong as the pressure continued to mount.

Manager Tony O’Sullivan brought on Kevin Minnock in an attempt to add more pace up front but it was Glebe who were
calling the shots as they increased their advantage on 70 minutes. Craig Penlong raced clear on the right and, with the defence back-peddling, he cleverly pulled the ball back for Dan Doherty to fire into the bottom right corner of the net.

Minutes later Alan O’Connell brought off a breath-taking save when he spectacularly tipped Sean O’Connor’s close
range effort over the bar. Tullamore refused to lie down and with 75 minutes gone they nearly reduced the deficit when Enda Carroll picked out Kevin Minnock in the inside right channel, but he blasted his shot wide when well placed.

With both sides unable to create any more clear cut chances the game fizzled out as Glebe North ran out deserving winners.

It was not all bad news as both Tolka Rovers and Liffey Wanderers failed to capitalise on Tullamore’s misfortunes, ensuring that the damage done was more psychological than material. They continue to top Division 1 and, given the remarkable depths of character and resilience they have displayed over the past number of seasons, they should be able to get their title challenge back on track this Wednesday when they take on Ballymun United in what is now a must win fixture.

In what was an uncharacteristically below par performance the man of the match award went to their outstanding goalkeeper, Alan O’Connell.

Tullamore are at home to Ballymun United this Wednesday, February 7, kick-off 8.00 pm in Leah Victoria Park.