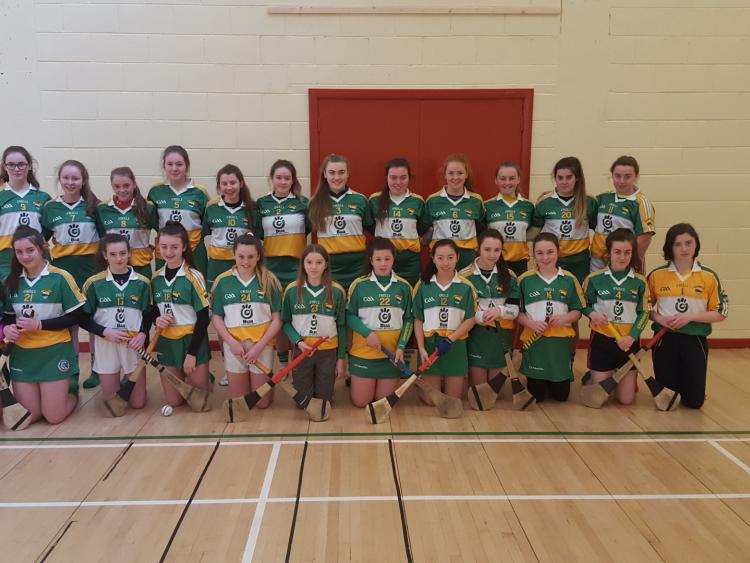 Coláiste Naomh Cormac battled a late Rathdowney comeback to book a place in the Leinster camogie final at the weekend.

The match was played on a cold, blustery day in the Coláiste Naomh Cormac grounds. Scores were hard come by in the opening ten minutes with both teams fighting hard for the first score and momentum.

Coláiste Naomh Cormac eventually opened the scoring account of the day with a nicely taken point from Ellen Hayden. This score was followed up with the Offaly school scoring three unanswered points from play from Emma Mulrooney and Cayla Fletcher.

Rathdowney answered these scores with their first of only two points after ten minutes. Then came the CNC onslaught, Jane Lowry came out of a ruck with the ball and let a high ball into the full forward line which Cayla Fletcher got on the end of and buried it in the back of the net.

Rathdowney returned to the field all guns blazing and with the aid of a strong breeze, the Laois school hit 1-1 without reply. Almost ten minutes of bad shooting and no scores came after the Rathdowney goal.

Then Coláiste Naomh Cormac started to pick up the tempo and started to dominate with great individual goals by Emma Mulrooney and points from Eadaoin Kilmartin and Cayla Fletcher.

As the game was coming to a close Rathdowney started to decrease the margins with two goals and a point with five minutes to go. With the game almost over Rathdowney were awarded a 21 yard free which their centreback rifled into the roof of the net, but it was all too late for the Rathdowney side.

Player of the Match:

Eileen Bracken was outstanding at centreback. She dominated in the air and her work rate was just immense. She is a real leader on the team and will be a big factor on the 20th if they hope to win the final.