A comfortable win for the boys in blue 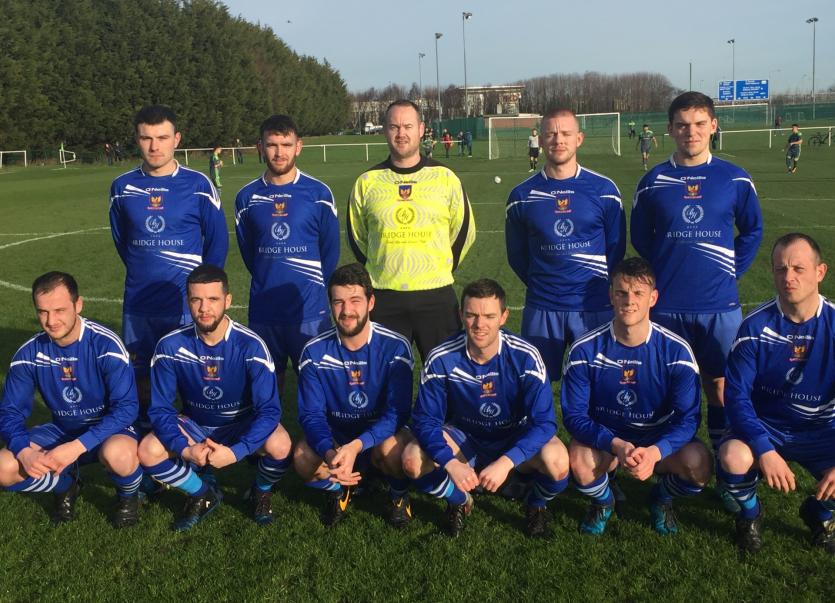 Tullamore travelled to Dublin last Sunday and came away with a great two nil win as they booked their place in the quarter finals of the Charlie Cahill Cup.

This was their first game of the New Year and they showed they had lost none of their edge as they served up a tremendous battling performance to knock a very good Dublin Bus side out of the competition.

They were quickly into their stride with Stephen Francis firing over following a corner and then Brian Norris sent Robert Bracken clear down the left but his effort flew narrowly wide.

As they continued to press Brian Gill played a great ball through to Bracken who slipped it inside to Shane Dolan, but he was denied by a fine relieving tackle from Patrick Mahon.

As the Busmen hit back Paul McMahon picked out Aaron McGurk on the right but Stuart Carroll came to his sides rescue with a great last ditch tackle and then McMahon and Aaron Sheehan combined to pick out McGurk, but Alan O’Connell was
quickly off his line to prevent him getting a clear shot on goal.

Tullamore nearly jumped into the lead on the half hour when a lovely flowing move involving Brian Norris, Robert Bracken and Brian Francis sent Kevin Williamson clear but his shot flew narrowly over and they again went agonisingly close when Norris and Bracken combined to pick out Shane Dolan, but he fired inches outside the right post.

With 43 minutes on the clock they deservedly took the lead when Anthony Kavanagh intercepted an attempted clearance
and picked out Shane O’Connell on the right and his pin-point cross was headed home by Shane Dolan from close range to leave the visitors one goal to the good at the interval.

On the resumption Dublin Bus came out with all guns blazing and should have levelled the game within minutes of the restart when Aaron McGurk raced clear on goal and rounded Alan O’Connell but only managed to find the side netting from an acute angle.

O’Connell was again in the thick of the action when he did well to hold on to Gareth Kenna’s wicked free kick and then Brian Norris had to be alert to get across and knock the ball behind as Alex O’Callaghan broke clear on the right. It was all one-way traffic as the home side went in search of an equaliser but, with an hour gone, Tullamore hit them with a stunning
breakout goal.

Brian Francis won possession on the edge of his own area and went on a surging run through the middle before laying the ball off to Robert Bracken who switched it to Anthony Kavanagh on the right and, when the keeper could only parry his vicious
cross-shot, Shane Dolan pounced on the rebound and cut inside his marker before driving the ball into the roof of the net.

This was a devastating blow that the home side, despite their best efforts, never recovered from. To their credit they never gave up and Shane O’Connell did well to scoop Aaron McGurk’s dangerous cross to safety and then Gareth Kenna crashed a 20 yard free kick off the crossbar as the visitors refused to relinquish their two goal advantage.

The Busmen had one more chance to get themselves back in the game when Owen Deveraux latched onto a long clearance but, with the goal at his mercy, he dragged his effort outside the right post.

With Kevin Minnock and John Paul Casey coming on to provide fresh legs Tullamore finished strongly and nearly added to their tally when Kevin Williamson picked out Anthony Kavanagh on the right and his low cross was fired inches outside the far post by Minnock as the referee brought a pulsating cup tie to a conclusion.

Tullamore return to league action this Friday when they travel to Dublin to take on Swords Celtic who are lying fourth in the table and, if they can maintain their current form, there is no reason why they cannot hold on to top spot in Division 1. In what was an excellent all-round team performance there were special contributions from Brian Gill, Stuart Carroll and Stephen Francis, but the man of the match award went to their outstanding left back, Brian Norris.