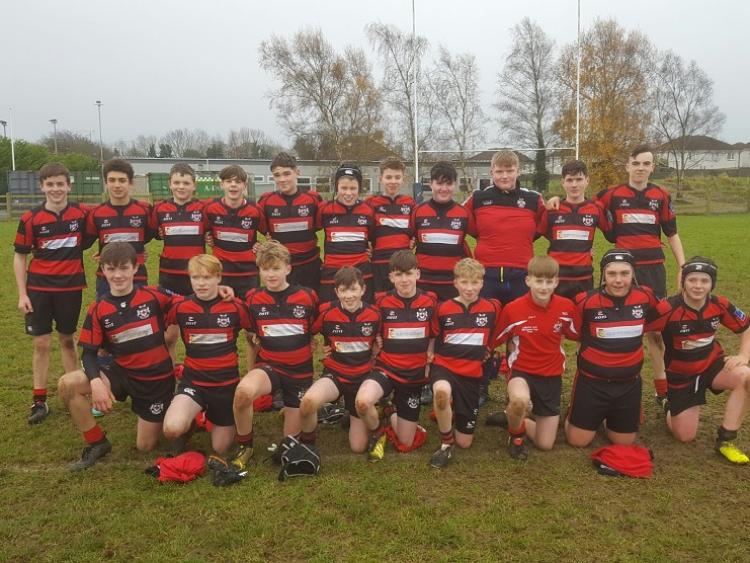 There was a bitter wind crossing the pitch as the match kicked off, leaving spectators to wonder how handling would be affected by cold fingers. They got their answer soon enough as, early on, numerous promising moves died due to handling errors.

Tullamore were the first to come to terms with the conditions, and built up a series of phases through their forwards, eventually earning a scrum on the Navan 5m line on the left corner. The short move was held up, but quick recycling of the ball put winger Paul Maindron over the line in the right corner, with an excellently taken conversion by David Dooley.

There were several penalties awarded to Tullamore due to Navan indiscipline, with a penalty kick scored by out-half David Dooley, before Tullamore opted for a scrum on the Navan 5m line once more. This time flanker Joel Troy scored following a break by number 8 Luke Dunne.

Shortly into the second half, Navan conceded yet another penalty, this time for holding on as Prop Mark Carroll was quick to release the tackle and attack the ball. Tullamore took a quick one, putting Cormac Egan through to score under the posts for an easy conversion.

Tullamore conceded quickly afterwards, caught snoozing when Navan took a quick tap and go penalty, giving up ground for not being 10m, and allowed a soft score and easy conversion. This spurred the visitors back
into action as, while under pressure in their own half, David Dooley box-kicked into space. Prop Liam Dunne was first to the ball, making a solid gain in ground, the resulting phase setting up Cormac Egan to score under the posts.

Immediately following the re-start, Tullamore had the home side under pressure again, with Navan penalised once more for holding, this time Cormac Egan the one quickly on the ball. This time, centre Luka Meyer was the creator, drawing in extra tacklers which left an overlap on the left wing for Sam Bourke to stroll over the line on the left.

With the result decided, some lax Tullamore defending allowed Navan to put a little respectability on the score before the final whistle.

The U16 team travelled to Athy on the back of four wins on the trot. Although starting without a number of their central players due to injuries, it gave debutants their opportunity. Tullamore went straight on the attack from their kick off.

As a matter of fact with his first touch of the ball at this level ‘Chalky’ White plucked Luke Egan’s high floating ball from the arms of the hapless Athy receiver to set Tullamore on the front foot. Tullamore’s quick recycling of the ball opened up the Athy defence for James Nolan to dot down with Egan adding the extras.

Tullamore controlled nearly all parts of the match at this stage and by the mid way point of the first half had added two more tries thanks to Dylan McDermot and Christian Conroy. They suffered a blow at this stage when Steven Joyce went off for some running repairs to be replaced by Jonah O Keeffe. Scott Milne continued Tullamore’s scoring spree with a fine finish under the posts.

All was going well for Tulliers but as this team is prone to do they ‘took their eye off the ball’ and compounded several errors in a row to allow the home side some go forward ball.

To Athy’s credit they didn’t need to be asked twice and soon punished Tullamore by driving over for their first score of the game. Buoyed by this score Athy piled on the pressure and when a Tullamore line out failed to find friendly hands, Athy tried to move the ball but some quick feet by Jonah O Keefe tied down their scrum half and affect a turn over.

From this position O Keeffe’s nimble toes broke the Athy defensive line ,stopped short of the try line he found the on rushing L Egan who dotted down out wide. With what must be the kick of the game Luke Egan converted to bring the first half to a conclusion 5-35 to Tullamore.

The second half started but Tulliers seemed to miss the whistle as within 60 seconds Athy had a 2nd try which they converted. Any thoughts of a second half comeback by Athy were thwarted by that dynamic duo of McDermott and Conroy who bagged a second score apiece within 10 mins.

Athy to their credit battled bravely and their team spirit was galvanised by their hard defensive work and never say die attitude. They continued playing and working for one another against the odds which is something they should be very proud of.

For their endeavours they probably deserved more but it was Tullamore’s day and they finished the day off with a try each to Steven Joyce and Liam Farrell to win on a score line of 12-57. Well done to all concerned.