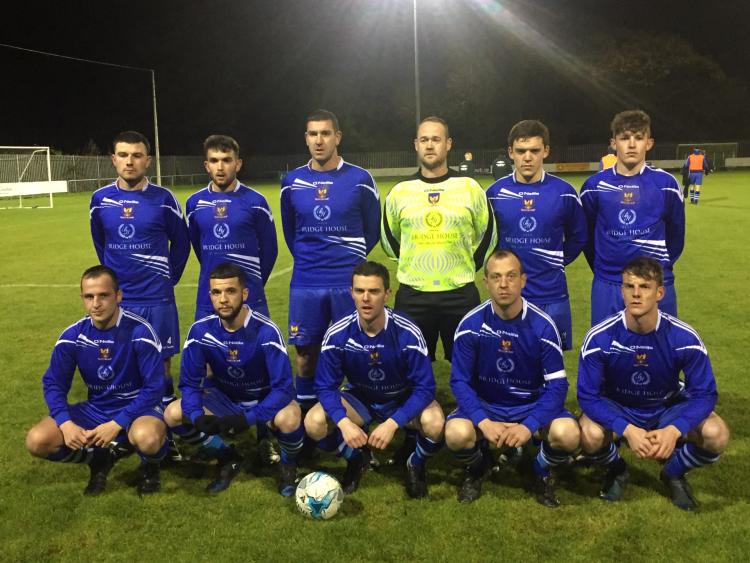 Tullamore came from a goal down to sweep past Dublin Bus in Leah Victoria Park last Friday and retain their top spot in Division 1.

They enjoyed the lion’s share of possession during the early stages and while the visitors did not exactly “park the bus” they were getting plenty of bodies behind the ball as they managed to frustrate the home sides best efforts.

A fine move involving Stephen Francis and Robert Bracken created an opening for Enda Carroll but Aaron Sheehan got across to clear and then, following a corner, Francis brought a good save from Connor Little in the Dublin Bus goal.

An early injury to Jack Brady did not help the busmen’s cause as Tullamore continued to press with Stephen Byrne doing well to head Shane Dolan’s dangerous cross to safety.

With 25 minutes gone the visitors suddenly broke from their defensive cover as Alan O’Connell was forced into a great double save to prevent Aaron Sheehan putting his side in front.

They were not to be denied five minutes later when Paul McMahon pounced on a defensive error and raced through and, when his first effort was blocked by O’Connell, he followed up to drive the rebound into the net for a fine individual goal.

With 35 minutes on the clock Brian Francis was taken down in the area following good play by Anthony Kavanagh and Enda Carroll with the referee immediately pointing to the spot and Kevin Williamson driving the penalty into the bottom right corner.

As Tullamore moved up through the gears Little had to be quickly off his line to foil Brian Francis and he was again in the thick of the action when he kept out Stephen Francis’ 25 yard effort down low to his right.

A lovely move involving Brian Francis, Enda Carroll and Shane Dolan ended with Robert Bracken firing the ball into the side netting but, with minutes remaining in the first half, they jumped into the lead. Bracken won possession out wide on the left and cut the ball back across goal for Enda Carroll to send a great 20 yard drive just inside the left post to leave his side

Tullamore went in 2-1 up at the interval.

As Tullamore struggled to add to their narrow lead the game’s defining moment came on the hour when Dylan Byrne was red carded for retaliation. With Macdarragh O’Neill coming on up front the home side began to make their numerical advantage pay as Enda Carroll brought a fine save from Connor Little after O’Neill was taken down on the edge of the area.

As they continued to press Brian Norris picked out O’Neill on the left but his effort flew across the face of the goal and he again went close when he got on the end of a Stephen Francis pass, but he fired inches outside the post.

With Brian Gill and Shane O’Connell coming on Tullamore continued to enjoy the better of the exchanges but it was far from one-way traffic as Alan O’Connell did well to field a Ciaran Bissett free kick under pressure but, with 75 minutes gone, they conjured up a goal that was magical both in its ingenuity and execution.

Lovely play by Kevin Williamson deep in his own half saw him play the ball inside to Brendan Bracken and he despatched a great cross-field pass to Brian Gill who ghosted past his marker before lifting the ball over the advancing Little and into the back of the net.

Within minutes they had added to their advantage when Stephen Francis won back possession and played the ball through to Macdarragh O’Neill who was taken down by the keeper as he skipped around him. Williamson duly stepped up to convert the resultant spot kick and put his side 4-1 in front.

Dublin Bus tried to get back in the game with Aaron McGuirke picking out Gareth Kenna but Shane O’Connell got back to
clear while, at the other end, Rory Condron’s free kick was well taken by Connor Little in the visitors goal.

Enda Carroll and Robert Bracken combined to send O’Connell clear on the left but his low cross was cut out by Wayne Byrne and in the dying minutes Patrick Mahon picked out Brandon Giltrap, but Alan O’Connell brought off a great point blank save to deny him as Tullamore laid claim to all three points.

This was a hugely impressive performance that will ensure that they travel to play second placed Liffey Wanderers this Friday in good heart. In what was a great all-round team effort the man of the match award went to Tullamore’s central defender, Brendan Bracken.