The Ladies win once again against Galwegians 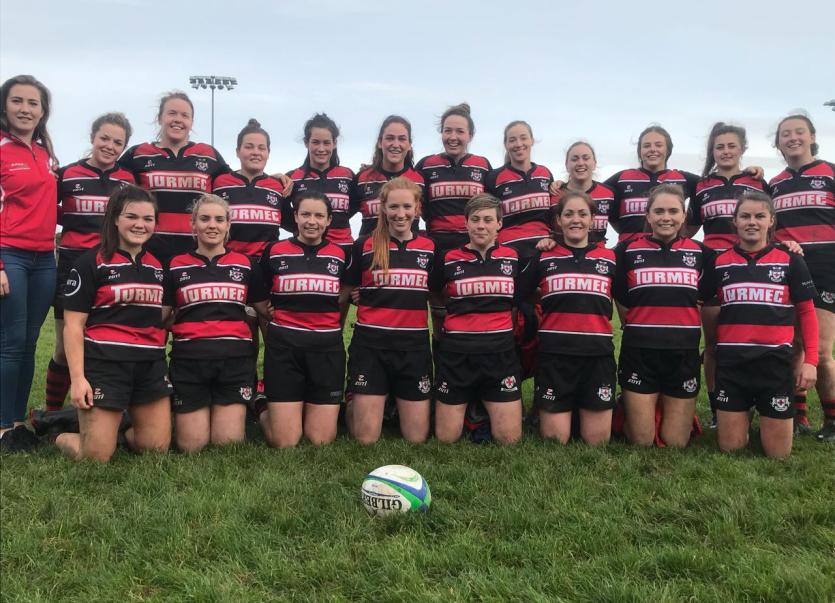 Tullamore U16s continued their rivalry on Saturday with a Navan team they had not met since the ‘15/’16 season. It must be said that these two teams produced some cracking games in the past and the crowd that gathered to watch the clash in Spollanstown hoped for a repeat encounter.

On the referee’s whistle, a big physical Navan side came out with all guns blazing and left Tullamore in no doubt that they were in for a torrid time. It took Tullamore a few minutes to settle into the game and it seemed that Navan had them under pressure in the close exchanges in those opening minutes. However, Tullamore finally found their rhythm and got on the front foot with James Nolan finding space on the left wing.

Nolan, with ball in hand, left the Navan defence flat footed as he scored the first try of the game, which was duly converted by out-half, Luke Egan. From the kick off, Tullamore knocked on and the resulting scrum allowed Navan to clear their lines and find touch. A quick line out by Tullamore found the ball once more in the hands of James Nolan who subsequently found his way to dot the ball down for his second try of the day, which was once more converted by Egan.

Navan settled into the game and through their forwards, worked some good ball into Tullamore territory and crossed the Tullamore line to score their first try, which was unconverted. Any hope Navan had of closing the gap at this point of the game was soon dashed as James McGivern got his hands on the ball and ran through a number of Navan players to score the third Tullamore try and Luke Egan lined himself up for the third time to kick the ball over.

Tullamore were to be reduced to 14 men at this point of the game as Conor Neary, who had been putting in some great tackles, got a 7 minute rest for a late tackle on a Navan kicker. Navan, however, failed to capitalise on the resulting penalty as Darragh Drea kept the ball in play.

After some positive Tullamore play with the likes of Conor Kelly showing his skills, James McGivern found himself in open country and headed straight beneath the posts to put the ball down for Tullamore’s fourth try of the day, making it a handy conversion for Luke Egan. The closing minutes of the first half saw Egan himself score the sixth try of the game but left the angle of kick too acute, resulting in his first missed conversion.

This game was to live up to the old cliché of a ‘game of two halves’ as Navan came out a different side in the second half. Either through Navan’s industrious approach or Tullamore’s apathetic attitude, the away team clawed their way back into the game. It could be said that they improved in all areas on the pitch and with this, it wasn’t long until Navan scored their second try of the game, which they failed to convert.

Tullamore fought hard but they seemed to lose their way and were not earning the clean ball they had been in the first half. The continued progress of Tullamore’s Wesley Reddin was evident in the second half as he made his presence felt in the front row and around the pitch.

Both teams provided an entertaining match on the pitch and anyone in the Spollanstown area at the time may have heard the rousing performances from both sets of fans as they sang and cheered on their boys. Although the day was Tullamore’s, Navan won the second half and had the final say on the scoreboard with their converted try, leaving the final score at 33-17 in Tullamore’s favour. Thanks as always to our coaches - Donal, Westie and Dermot.

The U12s travelled to Longford RFC on Sunday for a blitz involving Mullingar, Edenderry and Longford.

The first match was against Mullingar and Tullamore were very slow to get going, standing off tackles and letting Mullingar disrupt our rucks. Some poor tackling let Mullingar in for a soft try and only for a great try saving tackle from Cian Lynam they would have doubled their score. Half-time couldn’t come soon enough and after a focussed team talk from the coaches Tullamore were much improved in the second half with Rory Grehan scoring a try straight from the restart and good passing putting Cillian Bourke in for a score also. The rucking was much improved with Sam Dunne, Oisin Phelan and Tadhg Clear doing great clean out work.

The second match against Edenderry was a tough encounter with Edenderry running the ball well but some great tackles from Aaron Gorman, Tadgh Clear, Con Little and Kevin Healy kept Edenderry out. The ball retention improved and with that came quicker ball for the backs. Robert Murphy scored a good try after some good passing. Some great work by Aaron Gorman and Conor Hennessy allowed Cillian Bourke to get in for another score. Edenderry got in for a good score of their own shortly after. The second half was a tight enough affair. Some great ground was gained by Kieran Monaghan, Jack Hanlon and in particular Con Little showing great strength on one occasion but he was just held up on the line. The pressure told with Eoin Dunne getting in for a try, throwing a lovely dummy to fool the defence. Jack Hanlon rounded off the scoring with a trademark burst from about ten metres out that no one could stop.

The final game against Longford saw Tullamore really hitting their stride and with the backs growing in confidence out half Rory Grehan called a couple of backline moves that resulted in two tries for Cillian Bourke. Great to see moves from training work on match day. There was more great rucking from Robert Murphy, JJ Finlay and Oisin Phelan which paved the way for scores for Kevin Healy and Rory Grehan. Tullamore started throwing the ball around much more in this game and the space opened up for Jack Hanlon and Shane Marsden to round off the scoring. Another good blitz for this group of players with small improvement noticeable every week. Plenty of work to be done with rucking more than likely the major focus at training on Wednesday night.

Back to Back Wins for Tullamore RFC Ladies in the AIL

Things are on the up for Tullamore Ladies RFC after another successful win at home to 2016 champions Galwegians RFC in the AIL.

Looking to capitalise on their strong points from the previous weekend's encounter, the home side Tullamore got off the mark early and made the most of their attacking maul, gaining metres of ground.

It was only 5 minutes in when the pack ran over for the first try of the afternoon from 10 metres out to put them 5-0 ahead.

The game was abundant with scrums due to several handling errors from both sides, with the scrum acting as a perfect platform for the Tulliers to attack. Scrum-half Jill Draper was instrumental in both attack and defence, using her voice to direct her teammates into position.

Flanker Rose Dunne put in some strong tackles while young winger Clodagh Hannify who scored twice the previous week, made life difficult for her opposition, making some key tackles on the wing to prevent any attacking breaks by the visitors.

Tullamore enjoyed a large portion of possession throughout the first half in particular, and it didn't take long for winger Amanda Hollingsworth to slip through a gap in defence on the half way line. With 5 Galwegians players chasing her, it looked as if she wouldn't make it to the whitewash, but thankfully she showed real pace to outrun them.

The Tulliers third try of the afternoon was scored by second-centre Clare Currams out on the right wing, after some fantastic pick and drive efforts from the pack which acted as a ploy to lure the defenders in.

It wasn't all a one-sided affair however, as the visitors too enjoyed some brief spells of possession with Tullamore falling foul to a few knock-on's once tiredness set in. Having struggled in defence against the top three sides so far this season, Tullamore appeared to have regained their confidence as prop Katie Murray stole a lovely ball just inside the Tullier's half before the break. Her fellow prop Ciara Farrell also getting in on the action in front of the stand, just minutes later, which really boosted the crowd.

Galwegians full-back Mairead Coyne had proved a handful in the first encounter, however she struggled to break through on Sunday afternoon as the Tulliers held strong. There were one or two breaks by the visitors however as their #12 found space on oneoccasion, running 15 - 20 metres before the Tullamore full back Clare Cantwell hurled her to the ground.

Unlike Coyne, Tullamore centre Shannon Touhey's form continued as the two teams met for the second time, with Touhey bagging a brace of tries to take the home side's score up to 25-0. With out-half Pauline Keating forced off the pitch due to injury, Draper was forced to take over the kicking duties and did so duly, taking the tally to 27 points.

Despite a late consolation try for the visitors, it was a comprehensive victory for the home side as they go into a substantial Christmas break before they embark on their cup campaign in the new year.

Tullamore rise to 5th place in the table after back to back wins, which is a great lift after the criticism received across various media earlier in the season. With the club's u18 girls also winning 22-0 at home to Enniscorthy on Saturday afternoon, there's no doubt that there's plenty of talent coming through.