'There's a lot of work to be done' 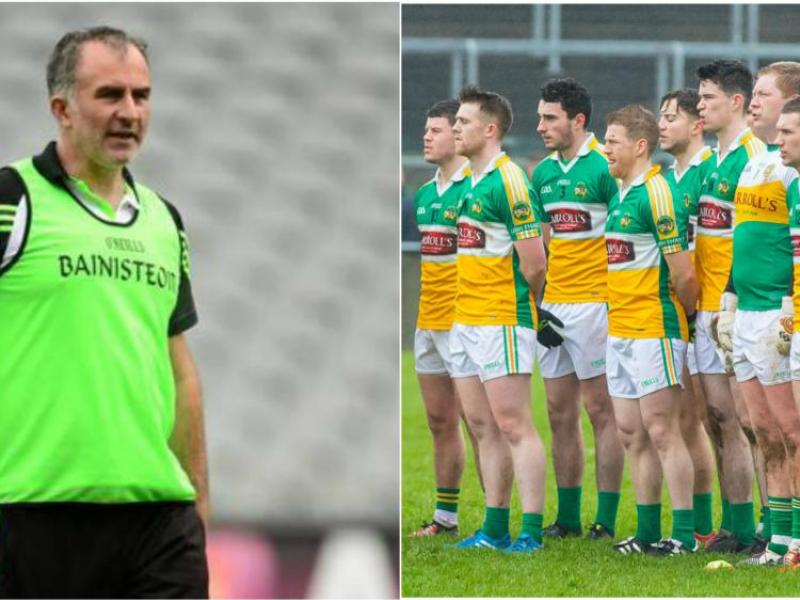 The new Offaly senior football boss has hailed the attitude of his players ahead of the 2018 campaign.

Speaking to the Offaly Express, Wallace said, "I've met some of the senior players and I have to say, the attitude is great." The Kerry native attended most of the latter stages of the Offaly football championships, assessing his options ahead of the O'Byrne Cup in December and 2018 league campaign in January.

"The next thing is putting a panel together, so I've been watching plenty and taking it all in." "I am looking forward to getting stuck in, and I'm looking forward as well to the O'Byrne Cup fixtures to get started. There's a lot of work to be done before a ball is even kicked in the new year," he continued.

SEE ALSO: Offaly to face the Dubs in O'Byrne Cup

Offaly's Faithful Fields facility has also caught Wallace's eye, calling the new home of Offaly GAA "state of the art," and "a credit to all involved." "We don't even have something like it down in Kerry, so it is a wonderful base for the next generation and something to build on for sure," he said.

He also told us that he has been impressed with the county board and football review committee, a group he called "top lads," adding that they have Offaly football at their heart and are putting the right structures in place. "From what I've seen, the future is bright for Offaly, and hopefully a few of those U21 Leinster finalists from last year will develop into top senior players."

Wallace has been hit with a couple of early blows at the helm of Offaly with the retirements of Brian Darby and Niall McNamee in recent months, as well as the absence of Ruairi McNamee and Ruairi Allen who will spend time in Australia in 2018. Graham Guilfoyle has also stepped away from the panel owing to work commitments, but Wallace is focused on "the lads that will be there" and getting the most from them.

Wallace will be looking to youth, but says it is as yet too early for the likes of Cian Johnson, who he described to us as a "special talent." "When you meet Cian in his school uniform you can see just how young he is, but he's a player held in the same regard in Offaly as David Clifford is in Kerry," he added. "He's a player that will certainly be in my plans in the future."

On the pitch, the new manager admitted that the league draw hasn't been kind to his side, with four away games, but he said he will want to get a look at different players over those early games. "Division 3 is a tough league now with the likes of Armagh, expected by many to win it, as well as Derry, Fermanagh and others."

On the championship front, Offaly were drawn to face Wicklow in the first round with the winners of that game facing Dublin. That game against the reigning All-Ireland champions may take place in Tullamore if Offaly can overcome the garden county.

Wallace told us that he is "not looking ahead to the Dubs," insisting that, "Wicklow will be no pushovers" in that opening fixture. "If there's anything I've learned about John Evans over the years, it's that he gets massive buy-in from his players. They'll be tough to beat," the Kerry man added.

Indeed, Wallace does come up against one of his old "buddies" in the shape of new Wicklow boss Evans, a man who coached in Kerry for many years. "It will be nice to pit my wits against him as he has a strong track record wherever he's gone, including the likes of Tipperary and Roscommon," Wallace remarked.

"We're talking about an Offaly team that has won one championship match in ten years, so you're not going to get any handy games," he concluded.

Offaly's first league game is against Longford on January 28, while their championship campaign kicks off against Wicklow in May. The O'Byrne Cup gets underway at the end of December.