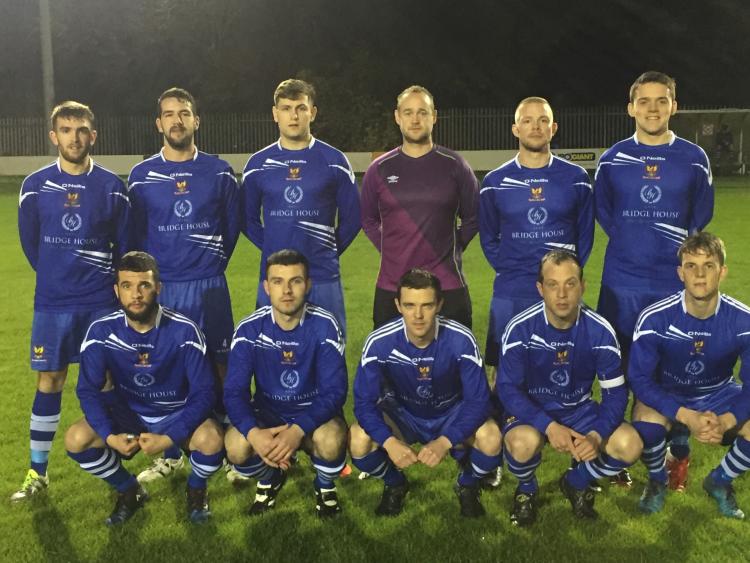 Tullamore reclaimed their second spot in Division 1 with this hard earned win over Verona in Leah Victoria Park, leaving them just two points behind league leaders Tolka Rovers with two games in hand.

They started brightly with Enda Carroll firing in a searching cross that just missed out Shane Dolan and then Eoin George and Carroll combined to create an opportunity for Dolan but Alan Kelly got across to clear.

As they continued to press Kevin Williamson and Shane Dolan worked an opening for Eoin George but his effort flew outside the right post while, at the other end, Ian Cummins picked out Sean O’Reilly in the area but he volleyed over.

O’Reilly was again in the thick of the action when he latched onto a defensive error, but he was denied by a great double save from Alan O’Connell in the home goal. As the visitors came more into the game Ian Croft sent Elmir Habibovic clear but Shane O’Connell got back to cut out the danger.

With 25 minutes gone Tullamore nearly hit the front when Kevin Williamson played a lovely ball through to Stephen Francis who knocked it back to Shane Dolan, but John Murphy brilliantly turned his shot around the post. As they began to wrest back control of the game O’Connell and Dolan combined to pick out Stephen Francis but he fired over and Francis again went close
when he got on the end of Enda Carroll’s through ball, but he was denied by a fine tackle from Daragh Perdisatt.

It was far from all one-way traffic as Dylan Malone and Philip Fitzpatrick combined to create an opening for Kenneth Clinch but Stuart Carroll was alive to the danger. With 40 minutes on the clock Town’s influential midfielder, Enda Carroll, was taken off injured with Brian Francis coming on.

They immediately went back on the attack with Kevin Williamson playing a great pass through to Eoin George and, when the
ball broke back to Stephen Francis, his effort was deflected inches wide. As the first half drifted into time added on they made the breakthrough when Williamson picked out Shane Dolan on the right and his cross was headed home by Robert Bracken at the far post to leave his side one goal to the good at the interval.

On the resumption Tullamore had a real scare when, following a corner, Shane O’Connell blocked Ian Croft’s goal-bound header on the line. A lovely flowing move involving Stephen Francis, Shane Dolan and Eoin George ended with Robert Bracken firing past the left post but, with 58 minutes gone, they added to their advantage.

John Murphy did well to tip Eoin George’s swirling cross behind and, from the resultant corner, Brian Gill sent a superb near-post header flashing into the far corner of the net.

Five minutes later Verona were back in the game when Kenneth Clinch found Elmir Habibovic 25 yards out and he sent a tremendous shot inside Alan O’Connell’s right post. The home side regrouped and went back on the offensive with Brian Norris playing the ball through to Robert Bracken, but Murphy was quickly off his line to avert the danger.

The visitors were growing in confidence and they nearly levelled on 75 minutes when Kenneth Clinch latched onto Murphy’s long kick-out and transferred the ball to Thomas O’Rourke who picked out Ian Croft, but his effort flew inches outside the right post.

As the game continued to ebb and flow Kevin Williamson and Robert Bracken combined to send Shane Dolan clear but he
fired over while, at the other end, Ian Croft was denied by a great last ditch tackle from Brian Gill. Williamson again opened up the Verona defence with a superb ball through to Anthony Kavanagh but he fired past the left post but, with 43 minutes gone, they put the game to bed.

Brian Francis played the ball across to Shane Dolan and he checked inside his marker before sending a great shot into the roof of the net. With the visitors visibly wilting Shane O’Connell picked out Mark Grennan but Daragh Perdisatt got back to clear as the referee brought proceedings to a conclusion.

While this was not Tullamore’s most impressive performance of the season they did more than enough to take all three points against a very good Verona side. There were excellent contributions from Alan O’Connell, Shane O’Connell, Stuart Carroll and Brian Norris, but the man of the match award went to their playmaker-in- chief, Kevin Williamson.

Tullamore travelled to Dublin last Sunday to play UCD and, courtesy of an early Robert Bracken goal, came away with a great 1-0 victory that leaves them joint top of Division 1 along with Liffey Wanderers. They are at home to Glebe North next Tuesday, November 7, when they will be hoping to maintain their winning run at home.