They took down the reigning champions 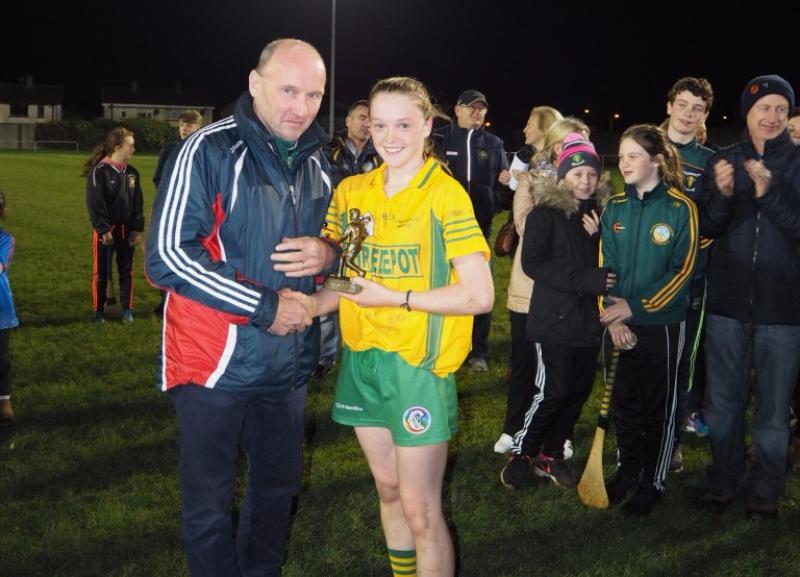 Kilcormac/Killoughey were crowned U16 A O'Meara Sliotars champions last Wednesday night in a floodlit O'Brien Park Tullamore, with seven points to spare over the reigning champions Lusmagh/Drumcullen.

Undoubtedly this was KK’s most impressive and consistent performance to date, and the super K's maintained the lead from the throw in.

When these two sides met in the group stages, it was Lusmagh/Drumcullen who ran out as impressive winners on the day on a score line of Lusmagh/Drumcullen 2-12 KK 4-3 however recent form had suggested this game would be a much tighter affair.

Tactics played a pivotal role in the game with both sides had their homework done with match ups around the field with positions not matching the numbers on their backs. Kilcormac/Killoughey were deserving winners as they lead them gave from start to finish and never seemed threatened.

The game was under way six minutes when Cayla Fletcher found space on the edge of the small square to punish a Lus/Drum defensive error and give KK the lead setting the pace for a very intense fast game. Moments later Emma Mulrooney popped the ball over the bar from a close range free. Player of the match Jane Lowry then converted a '45 as KK looked very impressive. The greasy wet conditions didn’t phase KK as they made clever use of the ball and when they had possession.

Another Jane Lowry free gave KK a six-point cushion with fifteen minutes played while Lus/Drum had yet to create a scoring chance. Eventually Lusmagh/Drumcullen got their game underway with a Clodagh Leahy goal when she made full use of the camogie rule breaking through the KK defence dropping the hurl and slapping the ball to the back of the KK net.

Kilcormac/Killoughey were clever with their passes and possession and their next score saw great one-two play between Jane Lowry and Emma Bracken for Lowry's third point of the game. Joint captain Kaitlyn Kennedy quickly answered this point to keep her side within reach of KK’s three-point lead.

Lusmagh/Drumcullen found it very hard to transfer the ball from defence to attack under constant pressure from the KK forwards who were extremely busy being a constant threat keeping the ball inside the Lus/Drum’65. Another Emma Mulrooney point followed by a fantastic Cayla Fletcher point after shaking off some serious defensive pressure from Labhaoise Glynn put KK back five points in front.

KK piled on the pressure in the closing stages of the first hunting a score however Lus/Drum’s Amy Byrne, Grainne Lyons and Maria Horan stopped numerous attacks and eventually Lusmagh/Drumcullen weathered the KK storm for the half time whistle with KK ahead 1-6 to 1-1.

There was a famine of scores in the opening ten minutes of the second half as huge work rate, physicality and intensity increased around O’Brien Park. Sinainn Glynn, worked tirelessly for Lus/Drum but her efforts were always sniffed out by commanding captain Sinead Moore who pulled all the strings at number six.

It was then Kaitlyn Kennedy provided her side with a lifeline midway through the second half shooting from distance, deceiving the KK keeper and raising the green flag leaving Lus/Drum trailing by three points. This was the closest Lusmagh/Drumcullen would get to the title as they lacked scoring power which KK plenty of.

With ten minutes to go referee Kieran Pat Kelly was forced to give KK’s Eileen Bracken her marching orders with a straight red for interference with the faceguard leaving KK with fourteen players. Emma Mulrooney added her fourth point after a good play involving Jane Lowry and Rachel Guinan.

It was all KK for the final fifteen minutes. Goal getter Cayla Fletcher added her second goal leaving Lusmagh/Drumcullen with no chance for a comeback. KK could have had plenty more scores on the board had it not been for the powerful Amy Byrne cleaning out at full back along with Maria Horan who kept a number of attacks at bay protecting between the posts.

The signs looked ominous that the u16 A cup was going to KK in the final minutes as the last score of the game came from a Jane Lowry point. When the full-time whistle sounded KK were crowned U16 A champions for the first time since 2007 and crowned winners of the first Offaly camogie final to be played under lights.

Sponsor of the competition, Sean O'Meara, summed up the game perfectly before presenting the player of the match award: “It was a fantastic game of camogie; the commitment and skill was tremendous in the first half in particular. There were six to eight girls who were playing extremely well but in the second half a couple of girls began to shine out more."

"On the Lusmagh/Drumcullen side Kaitlyn Kennedy and Amy Byrne were very good and Maria Horan in goal was excellent with three very good saves in goal. On the KK side Cayla Fletcher, and your captain Sinead Moore were good but I believe the player of the match was Jane Lowry."

Talking point: Kilcormac/Killoughey dominated the scoreboard from start to finish with Lusmagh/Drumcullen failing to convert vital scoring opportunities when they needed it most. Lusmagh/Drumcullen only had two scorers the whole game while KK had three scorers who made a huge impact.

Player of the match: Jane Lowry the mid-fielder covered every blade of grass and despite battling with cramp during the game she still made her presence known. Lowry registered a personal tally of 0-4, and It was fitting that the last score of the game came from her hurl.