A busy week for the club 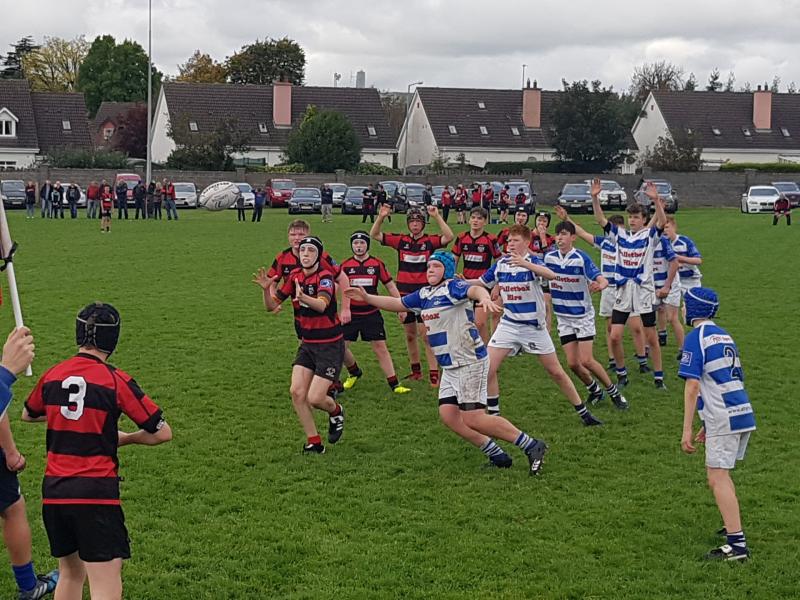 The U11s went to Edenderry on Saturday morning last, October 7. All 24 travelling players gave it everything in tackling with determination, offloading & running with skill. Overall, six games played with two draws, one loss & three wins. The highlight was a 5-5 draw where the Tullamore lads came back from 5-0 down to equalize against Longford who were well coached by Ger Murray from Tullamore. Thanks to Edenderry for the refreshments afterwards. Well done to all the U11s who represented themselves very well & showed huge eagerness to improve.

The U16 Black Team played their first Leinster League game at home against Tullow on Sunday. From the midday K.O, Tullow were the hungrier team. Their forwards pressed hard, closing down all available space. Tullamore could not get on the front foot from the outset and found themselves trailing by 14 points after two converted Tullow tries at the end of the first quarter.

Tullamore steadied the ship slightly as a penalty found them with a line out deep in the Tullow half. However a poor line out allowed Tullow to end this brief Tullamore excursion into their half.

With Tullow back on the front foot, a James Nolan interception found him well placed with nothing between him and the Tullow line and he touched the ball down between the posts, offering Tullamore a life line. The Tullamore supporters hoped that this would ignite some positive Tullamore play but slow line speed when defending a Tullow penalty left it far too easy for Tullow to cross over for their third try, leaving the H.T. score 21–7 to Tullow.

The second half started with Tullamore needing to get out of the blocks fast but once again it was Tullow who crossed for an all too easy break away try in the first two minutes of the second half. This seemed to be a wake – up call for Tullamore and a well won penalty in the middle of the field was moved forward 10 metres by referee Declan O’Reilly. This resulted in Eoin Hickey finding some room and with a dummy, crossed over for a Tullamore try which was then unconverted.

Tullamore continued in this positive vain and a good break by Dylan McDermott allowed the Tullamore forwards to bring the ball towards the Tullow line. The Tullow No. 8 was binned for cynically slowing down the ball and a series of three penalties enabled Tullamore to camp on the Tullow line for a period. However, Tullamore could not finish it out and get over that line. A decision to go out wide proved costly, and a Tullow turn over left Tullamore with nothing at the end of a number of phases of play.

Shortly after, Tullow got a fortunate break when an over thrown line out was collected by a more alert Tullow player and the resulting move ended in a try. Tullamore never got their hands on the ball from the kick off with Tullow bringing it straight back over the Tullamore line for another try. This phase of play typified Tullamore’s non commitment to first-up tackling. While the next score went Tullamore’s way with Mark Kelly bringing the ball over the Tullow whitewash, it proved futile and Tullow closed out the game the way they started with a break away converted try.

Well Done to Tullow and while it is commiserations to Tullamore, we must remember that it is the first competitive game of the season and this team has proved themselves far more capable than that performance.

There was a sense of anticipation in the air as both teams took to the pitch for what has for the last few years been classed as a “top of the table” clash, with both teams coming to this meeting following impressive wins last week.

Athy kicked off the first half, and were caught napping almost immediately when, following some deft passing, centre Luka Meyer found a gap in the Athy defence to sprint through and score under the posts within 60 seconds on the start.

Soon after the re-start, it was apparent that the Tullamore forwards had the edge on those of the opposing team. They dominated the breakdown, the scrum, and soon enough the pressure started to cause some errors in the Athy play.

The visitors were struggling to get out of their own 22 and Tullamore won possession following a knock-on. Several phases of forward play seemed to be setting up for an overlap among the backs, but second row Ronan Foxe ran on to a neat pass at speed and broke two tackles to dot down by the post.

Athy made a rare venture into the Tullamore half following the re-start, getting into the home 22, but an excellent tackle by Tullamore winger Paul Maindron put the runner into touch and the pressure was back on Athy. Out-half David Dooley kicked into space and the Tullamore players reacted more quickly than Athy to bring bigger numbers to the breakdown, leading to another Athy error. From the resulting scrum, the ball was fed to Dooley, who dummied and opened a gap to run through and score under the posts himself.

The expected Athy comeback in the second half was hampered by a couple of injuries, while the Tullamore forwards remained dominant. Athy were trying to live off scraps in the breakdown, and were struggling to get their plays moving with the constant pressure.

It was not long before the Tullamore scrum-half found David Dooley in space, allowing him to side-step the tackle and run through to score again between the posts.

Tullamore absorbed a sustained spell of pressure from Athy in the mid period of the second half, but they failed to capitalise on it, with some staunch defending by the Tullamore players. It was inevitable that, following another breakdown, Tullamore stole the ball and, after a few phases of play, fed lock Ronan Foxe on the Tullamore 22. The supporters were then treated to the sight of Foxe running from the Tullamore 22 all the way to the Athy try line, handing off several Athy tackles on his way.

Shortly after the re-start, the pressure was back on Athy. Under pressure from the forward line, the Tullamore hooker was first to the breakdown inside the Tullamore half, ripped the ball from the Athy player who had been tackled and the ball found its way to flanker Joel Troy.

What followed was the best move of the match. Troy broke the initial tackle and charged through but, seeing traffic ahead, offloaded to his No. 8 who continued the charge but, seeing more traffic, offloaded to centre Cormac Egan. Egan was almost clear, with the Athy winger and No. 15 closing fast. Just as they were committed, Egan offloaded to Luka Meyer, who had the momentum to cross the try line and dot down under the posts.

Tullamore were unlucky not to replicate the same move almost immediately afterward, but a rare Tullamore handling error gave possession back to Athy, who nearly profited from some lax defending toward the end of the match, but for a try-saving tackle from Joel Troy.

The final score of the game was from the boot of David Dooley, who maintained his 100% record on the day by slotting a penalty, making it 7 successful kicks for the day.

Everyone at Tullamore Rugby Club would like to wish our Senior player Cyril Cornally a speedy recovery after his injury during their Ulster Bank 2B loss to Bruff.