Williamson and Bracken on target for the Town 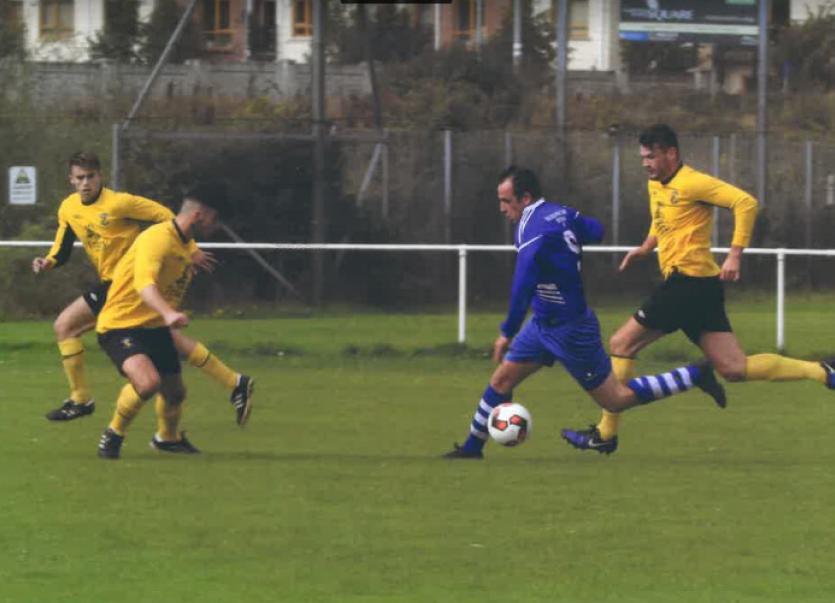 Tullamore continued their great start to Division 1 when they travelled to Ballymun last Sunday and came away with all three points after a hard fought contest.

The home side were quickly out of the blocks with Jordan O’Reilly firing in a searching cross that just missed out the onrushing Chris Sheridan while, at the other end, Anthony Kavanagh and Stephen Francis combined to play in Brian Francis but Shane O’Keeffe got across to cut out the danger.

With 15 minutes gone Town went tantalisingly close when Macdarragh O’Neill threaded the ball through to Brian Francis but his effort flew inches outside the right post.

Five minutes later Ballymun nearly broke the deadlock when Daniel Murphy broke clear on the right and picked out Karl O’Reilly in the area but he fired wide and then Chris Sheridan’s long range effort was parried by Ian Bolger and hooked to safety by Rory Condron.

As Tullamore hit back Kevin Williamson sent Robert Bracken free on the left but Ryan Scully got back to knock the ball behind and then Bracken picked out Brian Francis but his effort was well saved by Stephen Robinson in the home goal. With 35
minutes on the clock they jumped into the lead when Robert Bracken played a lovely one-two with Shane O’Connell before driving into the area and blasting an unstoppable shot into the roof of the net from the narrowest of angles.

Minutes later they added to their advantage when Stephen Francis and Macdarragh O’Neill combined to send Brian Francis
clear on goal only to be taken down in the area with the referee immediately pointing to the spot. The resultant penalty was fired home by the unflappable Kevin Williamson, sending the keeper the wrong way in the process.

As they continued to press O’Neill went on a great run on the right before being crowded out and then Robert Bracken’s swerving cross was tipped over by Robinson as the referee brought the first half to a conclusion with Tullamore enjoying a two-goal cushion.

Within minutes of the restart Ballymun reduced the arrears when Chris Sheridan got on the end of a long cross and was taken down in the area with the referee again pointing to the spot and Peter O’Reilly converting the penalty to put his side back in the game.

Tullamore’s response was immediate as Rory Condron and Brian Francis combined to pick out Macdarragh O’Neill on the right and his shot drifted inches outside the far post. As the home side hit back Ian Bolger did well to keep out Daniel Murphy’s fine 30 yard effort and then Chris Sheridan’s dangerous cross was headed clear by Shane O’Connell.

Town weathered the storm as Stephen Francis picked out O’Neill who set off on one of his signature runs before being hauled down and then Kevin Williamson and Warren Conroy combined to send Brian Francis clear, but he was denied by a great save from Stephen Robinson.

Conroy was again in the thick of the action when he won back possession and found Brian Francis but he fired past the right post when well placed. With Shane Dolan coming on they continued to press with Macdarragh O’Neill breaking free on the left and bringing another fine save from the Ballymun keeper as they ran out deserving winners of a very entertaining game on a scoreline of 2-1.

This was another excellent team performance with particular contributions from Brian Gill, Macdarragh O’Neill and Brian Francis, but the man of the match award went to Tullamore’s outstanding midfielder, Kevin Williamson.

Tullamore are at home this Friday, September 15, to Dublin side Pegasus in the first round of the FAI Intermediate Cup, kick-off 7.45 pm in Leah Victoria Park.