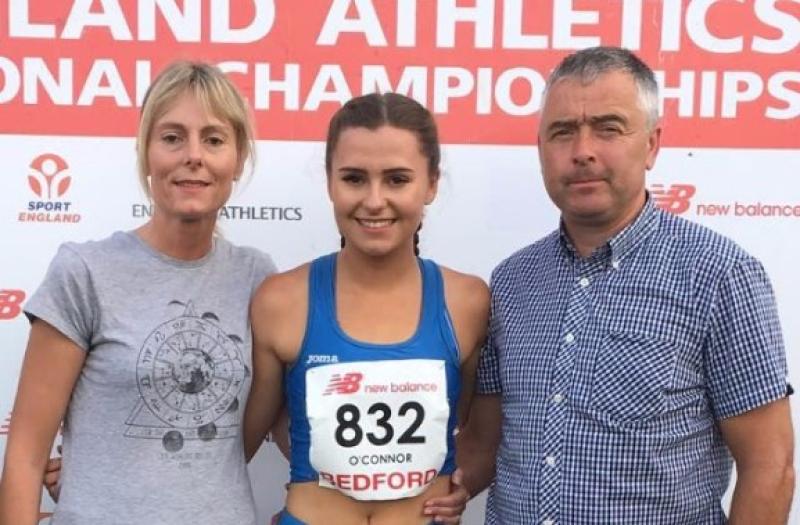 Ava O'Connor with her parents Sinead and Liam at the England Athletics Championships last weekend.

Tullamore Harriers athlete Ava O’Connor has showed great dedication to training in the last few years, and reward for such passion was caped with a trip to the UK at the weekend for the England Athletics Championships.

The championship, previously known as the 3A’s for anyone old enough to remember that title, took place in Bedford in the south of England.

Ava continued her improvements in the 1,500m as she ran a new PB of 4.48:8, which saw her coming home fifth. This is all the more notable as she is underage again next year for the same age group.

Ava also competed in the 800m heats but didn’t progress. However her time of 2.20 was a good run considering the blistering pace set over the first lap.

Most of the Harriers distance crew finished off their track season the weekend before running on grass. They were competing at the 2017 Community Games in Abbotstown in Dublin.

Grace McNally competed in the Under 10 200m and got through the heats and semi final with ease. Unlucky to be drawn in lane one in the final she still gave a good account of herself.

In the Under 14 800m Ava O’Connor gave a good account of herself to finish 4th.

In the Under 16 1500m Sarah Condron had a great run to finish 6th in her first national final.

In the heats of that event Dearbhail Cuddy was unlucky not to progress as she missed out by one place on making the final.