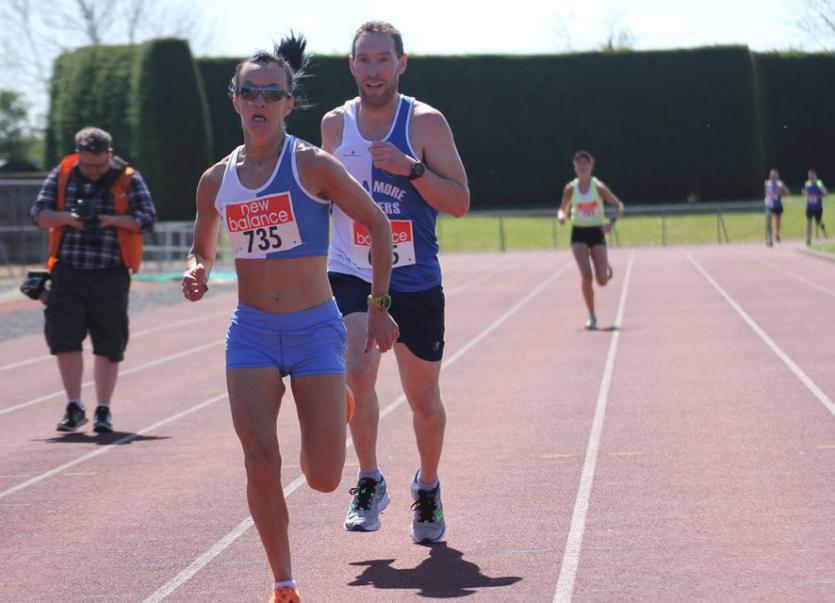 Round 1 of the AAI National League was held last Sunday with club teams from all over the country split between Tallaght and Athlone for the first leg of the competition. Tullamore Harriers drew Athlone for their first leg so were at least on relatively familiar turf. The club was represented by two diligent, though depleted teams in the Mens Premier Division and Women’s

The National League comprises of two rounds of full track and field events with clubs fielding one member in each event to earn points for the teams as they compete for a place in the final to be held in August in Tullamore. There were some great performances from the Harriers squad with Nadine Donegan winning her 1500m race and Liam Brady taking second in his 1,500m. The men’s team of Jim Dolan, Tom Rafferty, Babu Matthews, Paddy Heffernan, Darren Butler, Emmanual Lliori, Sean Donegan, Larry O’Reilly, Liam Brady, Darragh McNamara, Conor Butler, Ethan Donegan, Jason Donegan, and Glenn Finlay finished 13th out of the 14 teams competing with the girls team of Liz Cuskelly, Aoife Burke, Martha Brickland, Sarah Stephens, Lauren Gilligan, Nadine Donegan, Michelle Mullaney, Brigid Fox, Dympna Condron, Aisling McCormack and Laura Dolan also finishing second-last in the club results.

Following a great performance and two medals in the Leinster U9 pairs competition, Lily Grennan and Anna McGreal took part in the All-Ireland juvenile pairs competition at the Tullamore Harriers Stadium on Saturday. Lily and Anna represented Tullamore Harriers in the 60 metres sprint and the long jump. Lily and Anna jumped PBs of 3.00 metres and 3.12 metres to finish 6th in a field of fourteen pairs, just missing out on a medal by centimetres. In the 60 metre sprint, Lily and Anna ran times of 10.77s and 10.68s to finish 8th out of a field of sixteen pairs. A big congratulation to Lily and Anna on competing in the All-Irelands and hopefully there is more to come.

Ritchie Faulkner had a great run at the Coill Dubh 5k in Co. Kildare last Sunday where he finished third in 17.51.

Entry for the Quinlan Cup Half Marathon is open via the Athletics Ireland website www.athleticsireland.ie at €35. This year’s race will be on Saturday, August 26 at 11am. A relay option is also available.

Please note that use of the club’s facilities, including the tarmac track, is restricted to members of the club. Walkers are not permitted on the track during training sessions on Tuesdays and Thursdays from 6.30pm-8pm. A list of AAI-licensed fixtures is available on www.athleticsireland.ie.