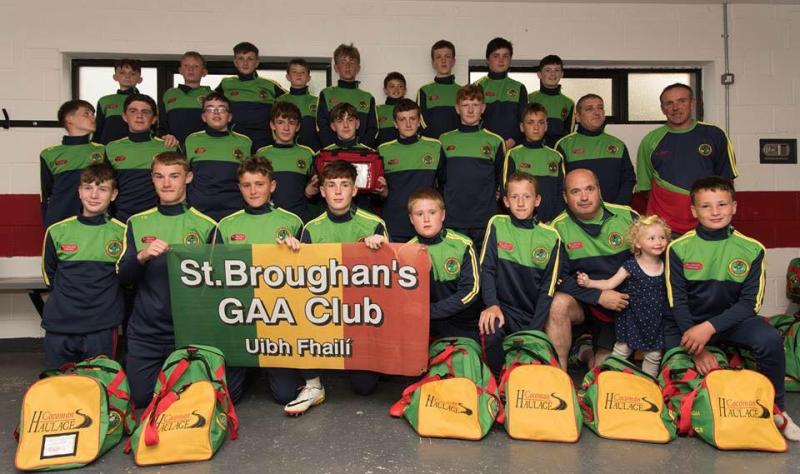 Controversy has marred the final day of the GAA's U14 National Feile nÓg competition in Cavan as Offaly club, St. Broughan's claim a score mix-up cost them in their Division 1 Shield Final.

St. Broughan's made their way through their group to the Division 1 Shield decider against Gowna, a Cavan GAA club, and it has been claimed that the Offaly team had a legitimate point ruled out towards the end of the game. The point would have resulted in a draw and extra time.

The point was never registered on the scoreboard or by the referee and at the final whistle, Gowna were declared the winners by one point on a scoreline of 3-8 to 3-7. St. Broughan's are said to have staged a sit-down protest.

A clearly upset St. Broughan's official, Lorraine O'Neill spoke to Midlands 103 radio after the incident, and described taking her frustrations with the "unfairness" of the result to the GAA President himself.

"I went up to the presentation stand and I spoke to the GAA President, Aogán Ó Fearghaíl. The President of the GAA fobbed me off," Lorraine claimed. "He told me that he was going by the referee," she added. The underage club have also said their captain Keith O'Neill also appealed for fairness for his teammates to the GAA President.

"Every official I speak to is telling me to go to somebody else," Lorraine explained. She said she told the GAA President that the referee made a mistake. "I have no problem with a mistake but it's correcting a mistake I am concerned with."

"This is not a Mickey Mouse match - this is a final and our children have played their hearts out. This is all about sportsmanship and fairness but there is nothing fair about walking away with a win that is not a win - it's a draw," Lorraine commented passionately.

"All we asked for was extra time, and that would have been fair, but Gowna have gone home with a tarnished Shield - they didn't win," she added.

She concluded by saying, "Offaly people sat on the pitch in 1998 due to unfairness and Offaly people will sit in Breffni Park here today and we will right this wrong."