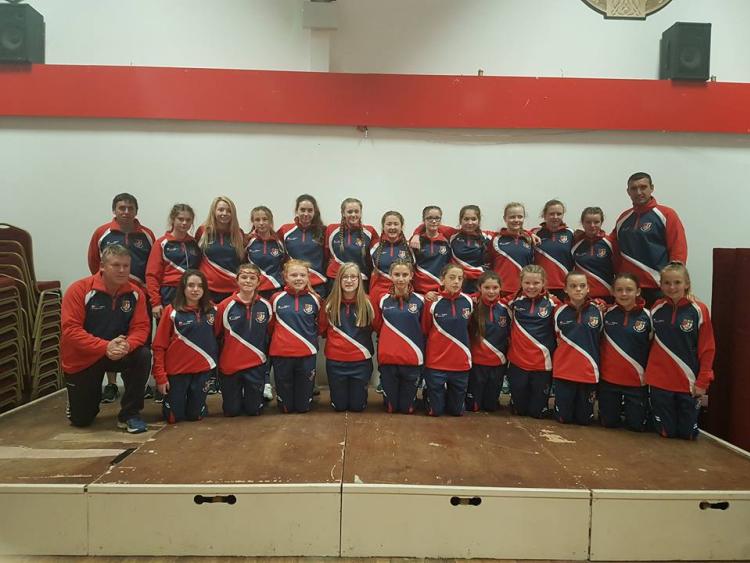 The Edenderry girls U14 team competing at Feile nÓg 2017

Three U14 teams from Offaly will compete at this weekend's Féile na nÓg National tournament, which is being held in Cavan, Fermanagh and Monaghan from June 23-25.

Edenderry's U14 team will be the county's sole representative in the girls side of the Gaelic football tournament and they will take their place in Group B of Division 2, alongside Cavan's Cuchulainns and Cavan Gaels, as well as Carryduff of Down.

St. Broughan's and Ballinamere/Durrow will represent Offaly in the boys competition in Division 1 and Division 6.

Group games will be played on Friday and Saturday, while the shield and cup finals in each Division will be held on Sunday where the three Offaly teams involved will hope to fight for silverware.

The John West Féile is a club festival for hurling, football, camogie and handball at Under 14 level, involving teams from across the Association.

The GAA says the Féile allows Under 14 players to participate in an annual national competition, playing against teams from other counties and provinces.

The Feile allows clubs to foster links with other clubs in other counties and provinces, and allows the host counties, like Cavan, Monaghan and Fermanagh to celebrate Gaelic games by acting as hosts.

"A core aim of Féile tournaments is to promote a philosophy whereby every player has the opportunity to participate and play in their respective Féile tournament at a level suitable to their age, skills and strengths," the GAA said.