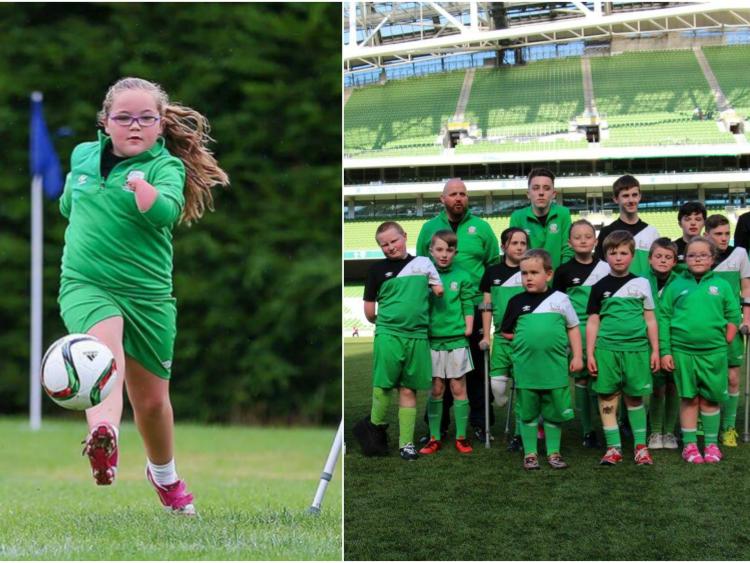 An 8-year-old Offaly schoolgirl has been chosen to represent Offaly at the upcoming European Amputee Football Federation soccer camp in Poland.

Chloe Hensey, from Daingean, was selected as one of just six players from the Irish Amputee Football Football Juniors academy for the camp, and will fly out with the rest of the team of July 6. She will be joined by players from Tipperary, Meath, Dublin and Cavan.

"The Juniors are the future of our game and we hope that in Ireland and Europe the Juniors of today will be the future stars of our game tomorrow," Simon Baker, Chairman of the Irish Amputee Football Federation, and General Secretary of the EAFF told the Offaly Express.

"These fantastic kids like Chloe are role models for other kids with a disability or amputation," he added. "A child becoming an amputee, whether through birth defect, illness or trauma, can be a very daunting experience for families and kids leaving them with low self esteem and confidence, but these kids, like others in our Junior Academy prove that through sport and determination anything can be achieved, even representing your country."

Last year Simon Baker held the first ever EAFF Junior Academy in Ireland which saw 40 amputee kids come together for 4 days of football training with professional coaches in Dublin. Over 30 children from five countries aged 6-16 took part over the three days.

On July 1, the Irish Amputee Football Association will be holding a one-day promo event in Dublin's Phoenix park. This will be run with the FAI to promote Amputee football in Ireland and also the EAFF football weeks project.

The Offaly Express would like to wish Chloe luck as she jets off to represent her country in Poland.