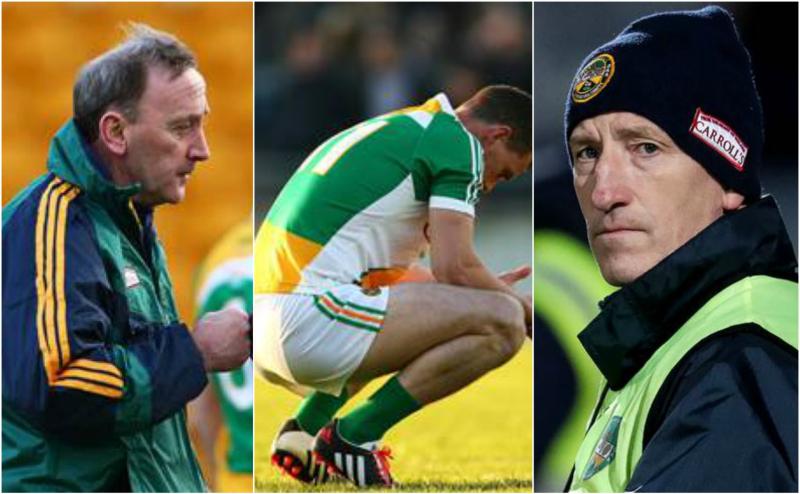 Offaly are facing another short summer in both hurling and football after two heavy defeats at the weekend. Westmeath had 11 points to spare over the footballers, while Galway had 19 in hand against our hurlers. It was not a good weekend to be an Offaly supporter to say the least.

I rarely agree with Ger Loughnane but I couldn't help but nod in agreement when he spoke of our hurlers and said, "Offaly are as low now, skill wise and ability wise, as they've ever been." That suggests our systems of development are not what they should be, but one thing we seem to lack at the minute is passion, especially at managerial level.

A clearly disconsolate Flanagan spoke after the game about the perils of going into attack mode in the second half against Westmeath. "In one incident, we gave away possession, and had a guy second yellow-carded. We still had to go for the game, and doing that we left ourselves open at the back, and a team like Westmeath, with the quality they have, was never going to let us do that, and obviously they piled on the pressure," he said.

Kevin Ryan echoed similar sentiments after the Galway game. "It's a learning curve for us. Nobody gave us a chance in hell, and I know the final result proves that right, but we just have to get the heads up, keep doing what we're doing, work a bit harder, and keep looking ahead. We've a qualifier in two weeks time, and we'll see what that brings," Ryan said in the aftermath of the 19-point loss.

Both men looked uninterested, and perhaps it was simply the displeasure at having to face the media after two heavy defeats, but there seems to be a distinct lack of passion there. The manner in which Ryan said "we'll see what that brings" made it sound like some sort of inevitable doom was approaching, and I think the guy is resigned to losing that qualifier game, no matter who it throws up.

Similarly, Flanagan cut a defeated figure as he faces into a clash with Division 1 outfit Cavan in the qualifiers in Tullamore next Sunday. Surely he knows if we can't get over Westmeath, a team that plied their trade in Division 4 this year, we haven't a hope of being close enough to even see the coattails of Cavan.

I can't imagine him giving a rousing speech next weekend and getting the lads fired up for that game. I can see him working diligently and talking about systems and stopping Cavan in some way, but who in the dressing room is going to get excited about that?

Flanagan faces a tough job - if he plays defensively like the first Westmeath game, the supporters attack him, and if he opens up the rigid structure slightly to attack a little more, we get mauled by 11 points. The man really can't win because realistically we have to play cautiously, but the supporters don't buy into it, and similarly, you start to lose players who are completely uninspired by it.

Kevin Ryan is fairly new in the hurling post, but already he looks fed up with it. Perhaps he realises there is very little to be hopeful about in Offaly hurling for the next few years - the pool of players, and therefore the skill pool, is diminishing all the time.

However, while there may be technical deficiencies with both camps, the first thing a team needs is inspiration. They need to feel a passion for the game, not just their county, which I have no doubt they love playing for. I'd love to be playing for Offaly, but I can't say I'd be overly enthused about playing for either Pat Flanagan or Kevin Ryan. 13 men behind the ball against Westmeath; two sweepers against Galway - hardly soul-stirring stuff.

It's not ideal to have a conveyor belt of managers through the county, but it certainly looks time for a change now. Kevin Ryan certainly deserves more time to try and build something, but if he's not interested, he'll never achieve anything here. Pat Flanagan has taken the footballers as far as he is going to, and I'm not here to bandy names around to replace him, but the possibility has to be considered at this stage.

Flanagan has done a decent job and has progressed the team slightly, but the tenure now appears to be souring. We're probably days away from being dumped out of the championship, and facing into a difficult looking Division 3 campaign next year, we need a new impetus.

Davy Fitzgerald heading to Wexford is an example of an under-performing team lifted instantly by the character of a manager with a visceral passion for the game. It rubs off on players.

Naysayers argue that this type of whirlwind management does not last long-term, but it awakens something in a dying county that can have a knock-on effect. Even after Davy has rolled on to his next job, Wexford will be better than they were before he arrived, and will certainly be out of the rut they found themselves in, similar to the one both our hurlers and footballers are wallowing in at the minute.

We need a whirlwind - Run of the mill will get us nowhere.